A Step by Step View of the Paris Attacks Last Year. We Remember 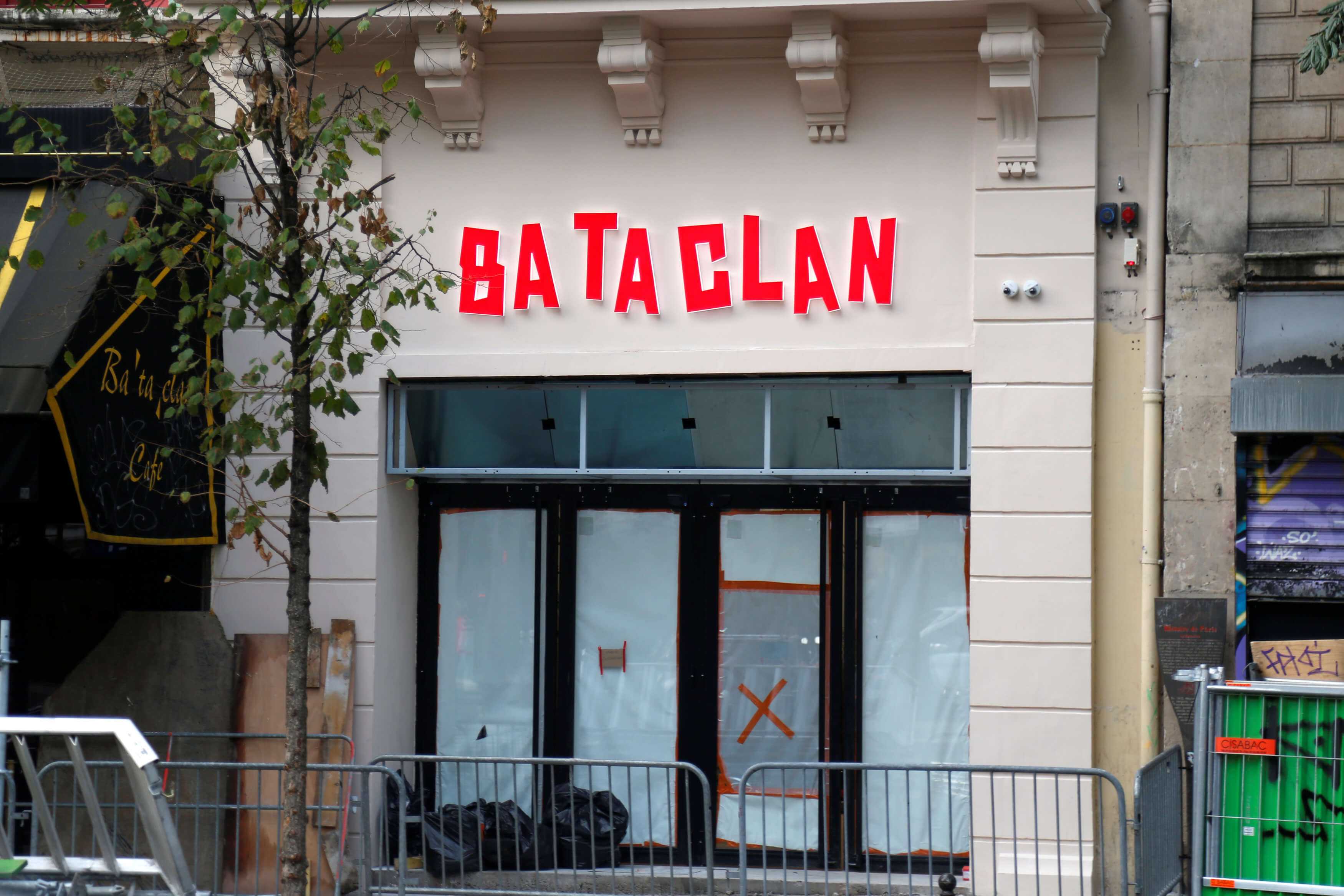 The attacks in Paris on November 13, 2015 by gunmen and suicide bombers left 130 dead and hundreds wounded.
It began at 21:20 local time (20:20 GMT) with an explosion outside the Stade de France stadium. A routine security check, had, according to the Wall Street Journal, prevented the 20-year-old suicide bomber, Bilal Hadfi, from entering. Inside was an international football friendly between Germany and France. When confronted by security, the man decided to detonate his vest outside of Gate D, one of the main entrance’s. The resulting explosion killed himself and a bystander.

It would emerge later that all three men wore the same sophisticated suicide vest. According to the Paris prosecutor, François Molins, the detonator contained nails to increase its lethality. The vests contained TATP, a peroxide-based and highly volatile explosive.

The blasts were audible inside the stadium and the sounds immortalised by television cameras. President Francois Hollande was escorted from the stadium at 21:30 following the second explosion.

Manuel Colaço Dias, a 63-year-old chauffeur and Portuguese national was the first victim of the November attacks. He moved to France at the age of 18 to escape Portugal’s authoritarian regime. For the past decade, he had worked for a shuttlebus company, before retiring in 2012. That fateful Friday was a day he did not want to work. But he accepted the request of a group of spectators who were running late. Dias died on the spot from the suicide vest blast.

Dias adored Sporting Clube de Portugal. And the Portuguese club paid tribute to him on November 15. The club’s official English-language Twitter account tweeted: “For Manuel Colaço Dias, a lion who fell victim to the terrorist acts in Paris.”

On the club’s official website, a statement concluded: “Sporting Clube de Portugal would like to offer our most sincere condolences to the family and friends of all of those caught up in the attack on Paris.”

Yet, amid the tragedy came an act of heroism which saved many other lives.  Salim Toorabally, a 42-year-old devout Muslim of Mauritian origin, is the security guard who stopped Hadfi from entering the stadium. In an interview with NBC News, he insists that he was ‘just doing is job’.

He caught one man trying to enter the stadium without a ticket. He told Hadfi: “If you don’t have a ticket, I’m not letting you in.'” He warned another guard not to let the man in when he attempted to pass through a second turnstile without a ticket.

Minutes later, Toorabally heard the explosion which continues to haunt him. His actions saved hundreds of lives. Nor will he forget the face of Bilal Hadfi. The man who killed himself and Manuel Colaço Dias. He reflected that he, and countless others could have been killed.

In March 2016, the French newspaper L’Equipe invited Toorabally to meet with the France midfielder Blaise Matuidi, who told him: “You are more than a hero.”

Meanwhile, in a different part of the city, at 21:25, gunmen opened fire at patrons of Le Carillon and Le Petit Cambodge with assault rifles. It left 15 people dead and 10 injured.

Days after the shootings, members of the Algerian family who own Le Carillon spoke of their grief. A popular destination in a trendy area by Canal Saint Martin.

Witnesses initially believed that firecracker had been set off, before the realisation that they were under fire from semi-automatic weapons.

Momo, a family member, told the Local France: “There was blood everywhere, people lying on floor, screaming and shouting. My cousin’s a doctor and came down stairs and started treating people. People were shouting for scissors to cut off clothes.”

One of the victims was Amine Ibnolmobarak, a 29-year-old teacher and architect from Morocco. He and his wife were dining Carillon terrace before the attacks began. and his French wife, Maya Nemeta, was shoot three times but survived. Other names of the dead included twins Charlotte and Emilie Meaud, aged 29.

The names of dead from the Le Petit Cambodge restaurant shootings included student Justine Moulin, 23. And 27-year-old Chloe Boissinot. She was from Château-Larcher in the Poitou-Charentes region, where 150 people held a silence in her honour.

At 21:38 gunmen opened fire outside the La Belle Equipe restaurant. Within two or three minutes, 19 were dead. One of the victims was 41-year-old Djamila Houd – who died in the arms of her husband Gregory Reibenberg – who owns La Belle Equipe. She was Muslim and he was Jewish.

Houda Saadi, the 35-year-old waitress and manager of LA Belle Equipe, of Tunisian descent, was another Muslim victim of the Paris attacks.

By 21:40 Braham Abdeslam had detonated his suicide vest at the restaurant Le Comptoir Voltaire on the Boulevard Voltaire. It left one person injured.

The deadliest attack began at 21:40 inside the 1,500-seat Bataclan hall, where the Californian rock band Eagles of Death Metal were entertaining a sold out crowd.

Three men wearing suicide vests entered the venue with assault rifles. Prosecutors state that the gunmen shouted “Allahu akbar” and made references to Syria and Iraq.

The attackers threw grenades and opened fire on the crowds. This wave of violence left eighty-nine dead. At least 99 people were eventually taken to hospital in critical condition. Some escaped the developing hostage situation. Some escaped by accessing the roof. Others did their best to hide.

Just after midnight the police assault ended the siege. Two of the attackers died by detonating their suicide vests.
The names of the dead included Anne and Pierre-Yves Guyomard, who hoped that after two years of marriage that children would soon follow. Cecile Martin, a 33-year-old clinical psychologist. Christophe Mutez, a 48-year-old employee of the software firm PROS France. Gilles Leclerc, a 32-year-old florist who attended the concert with his girlfriend, who survived the attacks. Helene Muyal, was a 35-year-old makeup artist who leaves behind a husband and their 17-month-old son. Eric Thome was a 39-year-old photographer and graphic designer. He was to embrace fatherhood for a second time in the weeks ahead. Nick Alexander, from Colchester, was at the Bataclan selling band merchandise.

Police later identified their killers as Omar Ismail Mostefai, 29, Samy Animour, 28, and Foued Mohamed-Aggad, 23.
Three hours of sheer terror would have lasting impacts in France and beyond.

At Tell MAMA, we did record a tripling of incidents. Our 2015 annual report noted that in the three weeks during and after the attacks there were 82 anti-Muslim incidents recorded. This short-term spike of 328 per cent confirmed an earlier estimate given to the Independent newspaper.

Cases reported to our service following the attacks again demonstrated gender bias. In one such example highlighted on November 18, 2015. A member of the public reported: “I saw a man behave inappropriately and make racist comments to a young woman on the tube where a white man wouldn’t sit next to a young girl with a hijab on. He called her a ‘dirty P***’ and [told her] to ‘f*** off back to Syria because girls do not wear hijabs in England’.
“I wanted to say something but was quite scared as none of the commuters did anything and looked away. She did speak back to him politely, and said: ‘I’m a British-Pakistani and am not forcing my faith on you or anyone else’.
Other examples of abuse included slurs which singled Muslims out as ‘terrorists’. Some had the indignity of a stranger shouting ‘ISIS’ in their direction.

Another high profile Tell MAMA case included the abuse directed at a Muslim couple in the Greater Manchester area. The unnamed couple had completed their shopping and were returning to their car when the abuse began. The female perpetrator went on to accuse the couple of being ‘terrorists’. She then attacked the woman due to her hijab and had unsuccessfully tried to tear it off. This. however, was not the end of the ordeal. A member of the public who had witnessed the attack sided with the perpetrator. It served to compound their outrage and humiliation.

Our 2015 annual report found that hotspots of anti-Muslim hate occur when Muslims use public and private transport networks, walk in public spaces of cities, and where they do their shopping. Muslim women are more likely to be attacked than men in most settings. The number of offline incidents have trebled from 146 in 2014/15 (12 months to March 2015) to 437 ‘offline’ incidents in the 2015 calendar year. This shows an increase of 300 per cent and there was an increase over time on the previous reporting period by 200 per cent.

One such incident typifies this trend: A Muslim woman out with family was confronted by an aggressive male who gesticulated about ‘killing them all’. The perpetrator had been silent and gave no early indication about motive. They felt targeted due to their religious identity. This incident occurred less than a week after the Paris attacks.
In the news media, Tell MAMA published an open letter to the Daily Mail, after a cartoon in the wake of the Paris attacks inferred that refugees and Muslims pose a violent threat to Europe.

Nor was the spike in anti-Muslim hate crimes and incidents restricted to Tell MAMA. The Metropolitan Police had also recorded a tripling of Islamophobic hate crimes and incidents. In the two weeks before the November 13 attacks, the Met recorded 24 Islamophobic crimes. Two weeks later that figure jumped to 76. In response to the rising hate crime, the Met increased its patrol and had more than 900 dedicated hate crime officers.

Attacks on Muslims, be it verbally or physically, did not just happen on the streets or social media. At around 2:15am on November 17, someone attempted to burn down the Bishopbriggs Cultural Centre in Auchinairn Road in the East Dunbartonshire town. The building is listed as a mosque on the Glasgow Muslims website.

Firefighters contained the blaze. Some damage resulted in financial loss but no-one was hurt as a result of the blaze. Police Scotland arrested a 41-year-old in connection to the blaze on October 20, 2016.

Hate crime spikes are not always easy to predict. In the case of both Paris attacks, we found that elevated number of reports came into Tell MAMA. Not all cases will directly cite the event – yet they represent how a climate of fear can impact cohesion. Others drawn into extremist right-wing narratives have long continued to exploit these tragedies for political gain. This sometimes extends to non-violent extremist hate speech online. Or, sadly, street based incidents. Not all perpetrators demonstrate far-right proclivities. Yet it speaks to how entrenched certain anti-Muslim narratives have become. Yet, an upsurge in reports also demonstrates that Muslims are more aware of the importance of reporting incidents. This includes confidential third party services like Tell MAMA or the police.