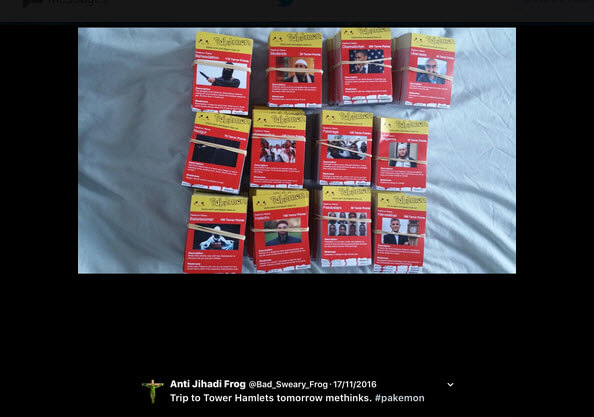 We have been aware of the fact that the ‘Anti-Jihadi Frog’ account (@bad_sweary_frog) has become a nexus for far right extremists and anti-Muslim haters to congregate around and this activity has been ongoing for a significant period of time. The account has been promoting what can only be described as hatred towards Muslims for years and has also been actively involved in the distribution of anti-Halal stickers and which led to Liam Edwards pleading guilty to racially aggravated criminal damage in 2015.

Allied to this, the following information that we have should force Twitter to act on this account which is at the heart of promoting anti-Muslim views and being one of the epicentres of feeding polarised opinions against Muslims.

The Evening Standard reported on the following ‘Pakemon’ stickers being plastered over parts of our capital city. One of the stickers highlighted the Mayor of London, under the heading of ‘Pakeman’ and with a sub-heading of ‘HamasKhan’. The sticker goes onto call the Mayor of London ‘dangerous’ with a ‘hatred of Christians and Jews’. Linking the Mayor of London to terrorism, a classic anti-Muslim trope, the card then awards points within the racist campaign.

Not only is such material inflammatory and untrue, it is meant to foment divisions within communities by promoting anti-Muslim tropes and hatred towards Muslims in general. The stickers also use racialised language and cross legal boundaries and thresholds.

Tell MAMA received information last night that the following account is responsible for the distribution of such material. We also have material that potentially highlights and identifies the individual behind this campaign of racism and anti-Muslim hatred and we will be passing on the material and the relevant name to the Metropolitan Police Service.

The following evidential photos show how the online world manifests connections with extremist anti-Muslim hating accounts and how anti-Muslim bigots use it to promote street based and real world campaigns that have impacts on communities. Anti-Muslim Account Highlights Batches of Stickers to be Distributed. Within the pack of stickers, the Mayor of London sticker can clearly be seen. (Material and links provided by @suspendedmonkey) Discussion on the possible dissemination of the stickers Anti-Muslim Hate Account Promotes views of ‘Londonistan’ and Racist and anti-Muslim Stickers. States, “Gotta catch and deport them all. Keep your eyes open in ‘Londonistan’ for the upcoming sticker campaign.” “I am looking for some London/South-East based patriots to join an upcoming sticker campaign. #pakemon”