How Anti-Muslim Bigotry Percolates into Other Migrant Communities 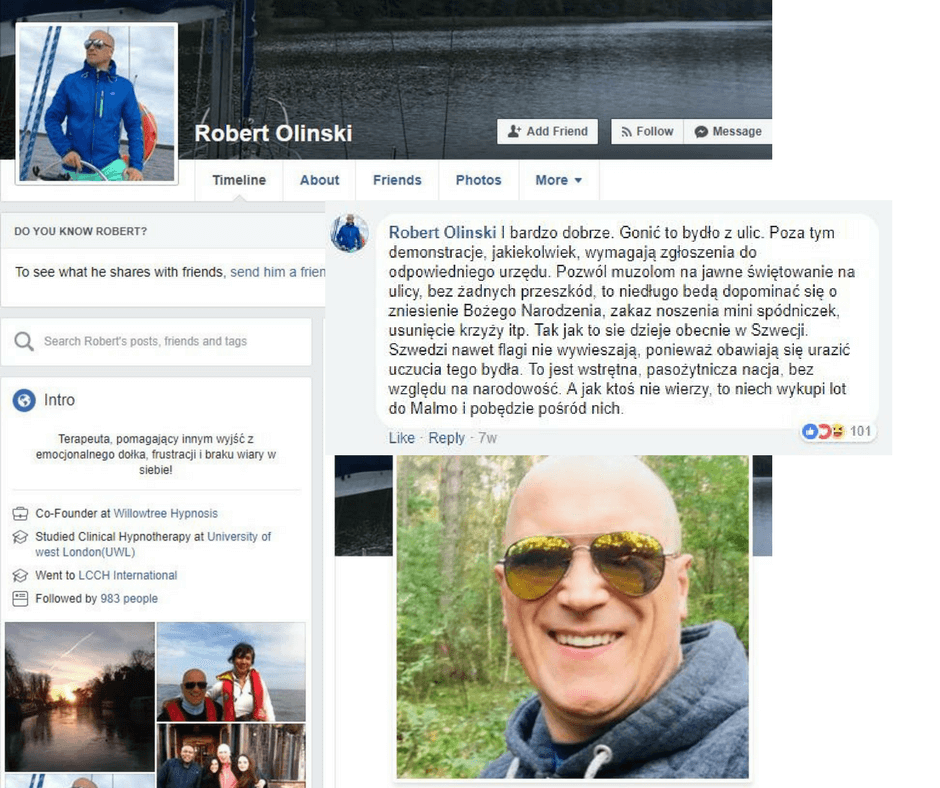 Robert Olinski is the co-founder of the Willow Tree Hypnosis practice and also is a practising therapist within it. Olinski works from what it seems, are rooms within Central London, all of which might give him a certain respectability and authority in the eyes of some members of the public.

In general, people would assume that someone who works in a position of this responsibility and with members of the public, might want to refrain from putting up bigoted and prejudiced statements, especially if they want to be taken seriously.

A translation of Facebook comments by Olinski show that anti-Muslim bigotry sadly pervades into people who have settled into the UK and in this case, from someone of Polish heritage. As we have highlighted before, we are concerned how far right groups are actively trying to engage and tout sections of settled Polish communities in the UK and within Poland itself.

In a response to a report about a group of Muslims in Greece being beaten up by football hooligans, whilst they were in a procession trying to celebrate the Birthday of the Prophet Muhammad, (Milad un Nabi), Olinski, posted the following comments on his Facebook page:

“Well done. Chase those animals off the streets. Besides, any demonstrations require official registration. If you let ‘muzzies’ celebrate in the streets without any problems they will soon demand cancelling Christmas, banning mini skirts, removing crosses, etc. That’s what’s happening in Sweden at the moment. Swedes don’t even put up their flags anymore because they’re scared of offending those animals. It is a nasty, parasitical nation, regardless of their nationality. If you don’t believe me, get yourself a plane ticket to Malmo and spend some time among them.”

“A therapist helping people to come out of emotional downs, frustration and lack of confidence!”

We are sure some of his patients may think different after reading this.