Young Muslims in the UK face enormous barriers in education and gaining meaningful employment due to Islamophobia, discrimination, and racism, a study has found.

A report from the Social Mobility Commission (SMC), an independent advisory board, found that a strong work ethic and resilience, often from the experiences and sacrifices of their parents, with some developing a sense of duty to repay these sacrifices by succeeding in academia and the workplace.

Resilience, however, became a coping mechanism for many against pervasive forms of racism and Islamophobia, which were an ever-present reality.

In education, many felt that teachers often held stereotypical or low expectations of their Muslim students, with non-Muslim teachers reluctant to engage students, further compounding alienation due to the lack of Muslim teachers and role models in schools.

Young Muslims felt the lack of tailored support from teachers hindered their ability to succeed. Many reported that teachers did not offer enough guidance, encouragement or support, from taking difficult subjects, participating in extra-curricular activities, or explore alternative employment or higher education alternatives.

Parents sometimes struggled to support them in studies as being educated in a different system meant they lacked the requisite capital, social networks, or knowledge to help them make informed choices.

Among the young Muslims interviewed, there was an acknowledgment that some private Islamic schools reinforced traditional female gender roles.

Despite these barriers, young Muslims have a relatively high participation in higher education. Young people from Pakistani and Bangladeshi communities are now more likely to succeed in education, but women from such communities are the least likely to gain graduate jobs despite having the graduate-level qualifications.

Young Muslims interviewed by the SMC noted that geographic location, discrimination, and fears of being a minority, limited their university aspirations. Some may choose to live at home due to cultural reasons or family pressures. Many reported self-esteem issues due to a failure of institutions to support isolated minority students, recognise Muslim identity, or promote integration. Incidents of racism and Islamophobia further damaged the confidence and self-esteem of young Muslims. As a result, some Muslims are leaving university early, or not gaining ‘good grades’.

Geography also hinders on the employment prospects of Muslim women. In our evidence to the Home Affairs Select Committee last year, our research found that ‘Homemaking’ women in relatively deprived neighbourhoods are less likely to become employed and those women residing in those areas who are employed are more likely than others to become unemployed. Misconceptions about cultural differences, and false assumptions that Muslim women prioritise family life over work leads to ‘significant discrimination’ at the recruitment and career advancement stages.

The transition in the workplace is harder for those of disadvantaged backgrounds when they lack the informal networks or social and financial capital to gain paid internships or work experience.

Many of the Muslims interviewed expected to face discrimination even when they had the educational qualifications required. Participants believed that discrimination would deprive them of potential interviews due to ‘ethnic-sounding’ names. A BBC study earlier this year confirmed previous academic studies that British Muslims in Britain are underrepresented in professional and managerial roles than other religious groups.

More broadly, austerity and public spending cuts have also had a disproportionate impact on BME women. 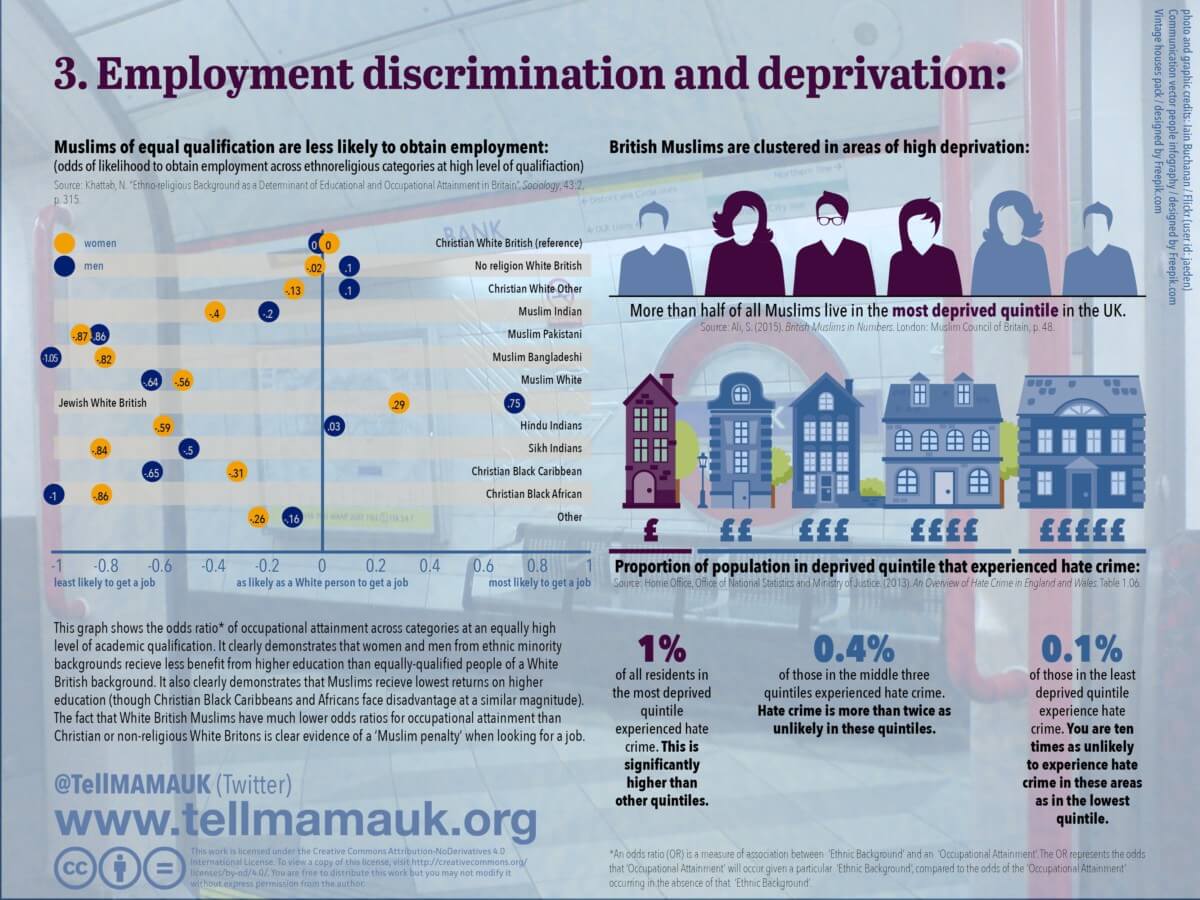 An infographic we produced in 2015 to highlight employment discrimination and deprivation.

Neighbourhood poverty, cuts to ESOL teaching, and a failure of employers to recognise parental qualifications all contribute to low-income households.

Writing in the Huff Post UK, Professor Jacqueline Stevenson, who authored the report, concluded: “It is time for robust and immediate intervention from Government, schools, universities and employers to create an equal playing field where everyone has a fair chance to succeed in life – regardless of their background or faith.”.

Some of the key recommendations include religious and cultural diversity training for teachers. When relating their experiences of Islamophobia and racism, many young Muslims interviewed, mentioned a lack of knowledge from non-Muslims about their faith and Muslim culture. Many felt that inflammatory, careless, and inaccurate media reporting harmed their ability to form positive bonds with others.

For young Muslims, the report calls for more tailored support and mentoring schemes, to better prepare them for their post-16 choices.