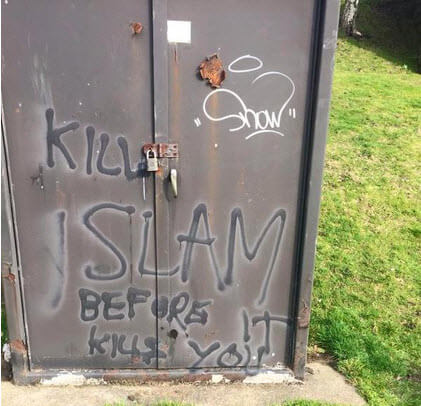 Higher education campuses are places of learning, social engagement and interaction. They are environments within which dissent, free thinking and dialogue are supposed to enhance the learning and life chances of young people. On occasions, they have also sadly been targeted for hatred and prejudice in a desire to send out a perverted and twisted message that Muslim and Jewish students are not welcome.

In January 2015, we received the following information of a Swastika and anti-Islamic comments being placed on the walls of student accommodation attached to the University of Birmingham. On an electrical pill-box, ‘kill Islam before it kills you’ was scrawled and the statement suggested that the individual was trying to bypass hate crime laws. In March 2016, we reported on a Muslim female student who was part of the ‘Discover Islam Awareness’ week which is held by the King’s College London Islamic Society (ISoc).

Muslim women who were at the stand outside the Strand campus were there to try and break down misconceptions about Islam and to respond to questions members of the public may have around Islam and Muslims.  They were approached by two men who disrupted the stall and the activities of the women, leading to an assault on a Muslim woman, where her niqab was pulled.

In May 2016, Student Rights reported that racist Swastikas and ‘SS’ terminology appeared at Durham University where student accommodation and nearby boathouses were sprayed with these anti-Semitic symbols. Anti-Muslim graffiti was also found with the term ‘Muslim Monkey’ clearly visible. At the end of June 2016, anti-Muslim graffiti on banners regarding an Eid Prayer and festival were found by students at the University of Leicester in a public area. Eid was crossed out and with ‘Fuck Islam’ written on the banner and with swastikas across it. A second banner advertising the Eid prayer festival in Victoria Park in the City of Leicester was also defaced as it was tied to local railings. It also hate a Swastika scrawled over it with the words “hate and lies”. We must maintain vigilance against such hatred on campuses, whether they are targeted at any specific group of students and given the fear and anxiety that such incidents cause. Given the rise in anti-Muslim and racist hate post Brexit, we would urge students to get in touch with us if they come across anti-Muslim hate on campus.

Note from the University of Leicester