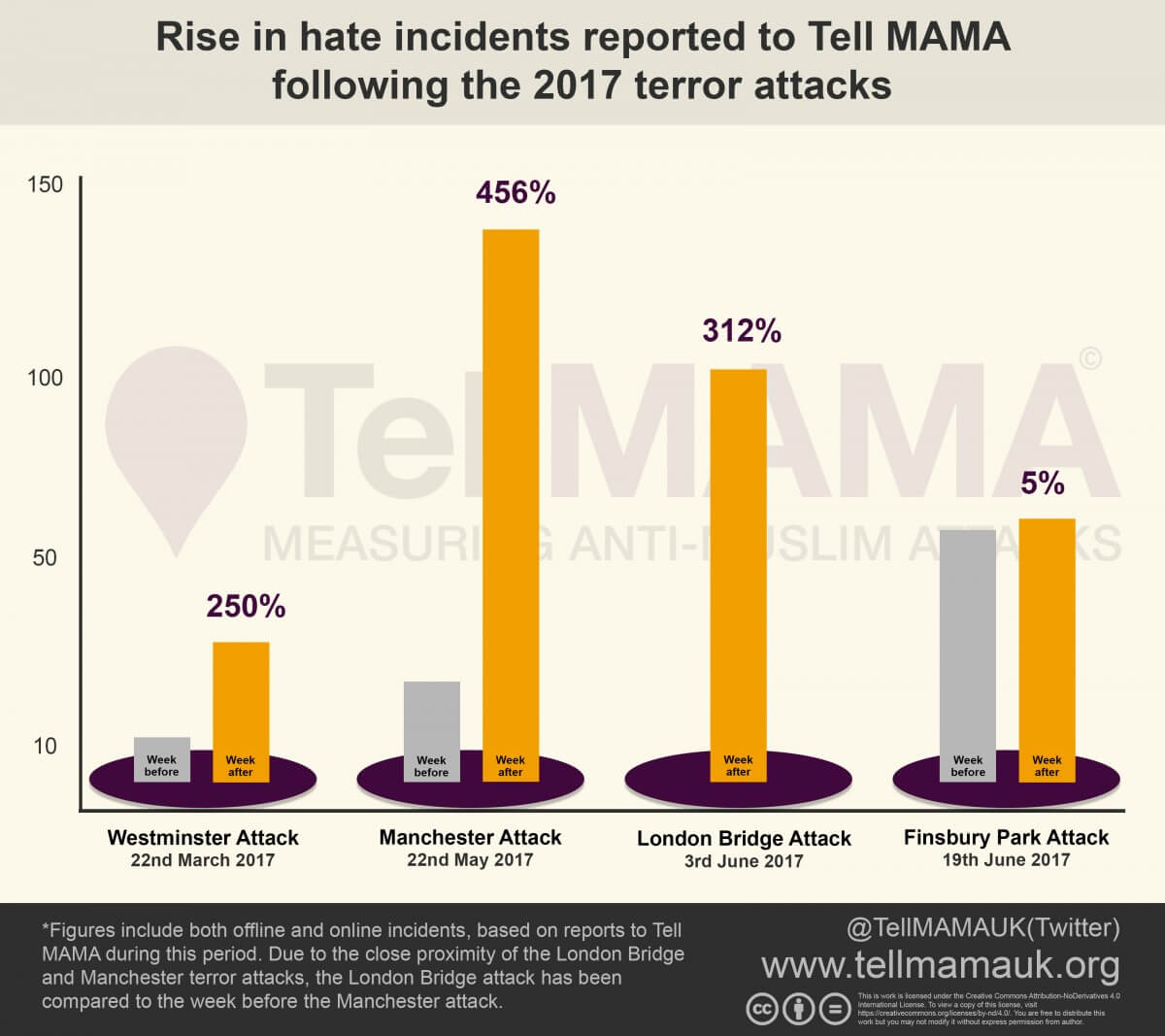 The recent Independent article highlighted the sharp rise in mosque attacks that have been seen across the country and which Tell MAMA has been systematically documenting for over 5 years now. Attacks on mosques, we have said time and time again, have a wider destructive impact on Muslim communities who use it – with some reading into the attack that they are not wanted or that they are not part of the local community. Attacks on mosques and Islamic institutions have the potential to cause long-term impacts on cohesion, the further escalation of hate crimes and in the worst instances, the possibility of further public order offences. Allied to this, all the data we have shows that terrorism, in particular, creates spikes in hate crimes, as reported by the National Police Chiefs Council (NPCC), though their data acknowledges other factors. There is a consequence for cohesion and the variations in far-right extremism towards Muslim communities feed off such narratives and events.

To give context to the Independent article, it is important to state the following given the fact that there are other issues that drive anti-Muslim sentiment. Terrorism is one, inflammatory media headlines are another and we have seen this when headlines are emblazoned across front pages, only for minute retractions to be printed after IPSO complaints. Such work, (of holding to account stories that are not factually correct and meant to sell more newspapers or drive more traffic to a website), is essential and we salute those who carry out this vital work since it does help to reframe facts from fiction. There are a growing number of activists from Muslim and non-Muslim communities doing this and we value their much-needed work with the hope that it continues in the future.

We also understand that many people focus on the role of inflammatory and inaccurate media coverage. This does not make them Islamists, nor should their work be curtailed since holding to account the powerful is a fundamental plank of a healthy democracy, while we primarily focus on supporting those affected by anti-Muslim hate crime, we also use our platform to challenge press inaccuracies, or when hate crime spikes occur in other major political events, be it domestically or internationally.

What is a problem, is when some believe that the media is the only driver, as others may choose to deny or even acknowledge the lasting impacts of terrorisms on communities and individuals, either directly or indirectly. Some may feel that terrorism is not their responsibility, and that is their position to hold. We understand such a position but digress, as it is still our desire to challenge those who seek division through acts of terroristic violence, and how such hatreds manifest, and we remain committed to challenging all forms of hatred.

Some may seek to avoid the issue or seek to position themselves as the loudest community voice, when the voices that need to be heard loudest, are those directly impacted by anti-Muslim hatred, abuse, and hate crime.

Additionally, it is clear is that the vast majority of anti-Muslim hate incidents are opportunistic in nature and where individuals come across visible Muslims. In many of the cases that we have worked on, a language related to terrorist attacks is thrown at visible Muslims, such as “you were responsible for Manchester”. The link between terrorism, opportunism, and perpetrators feeling emboldened is clear. Some may feel emboldened due to press articles and comment pieces which blame all Muslims for extremism and terrorism or framing Muslim communities as culturally threatening or culturally at odds with Britain. As for others, they may have come across far-right extremist material or anti-Muslim rhetoric on social media pages or websites. Causation factors are many, including terrorism. It is neither one or another, but a combination of factors.