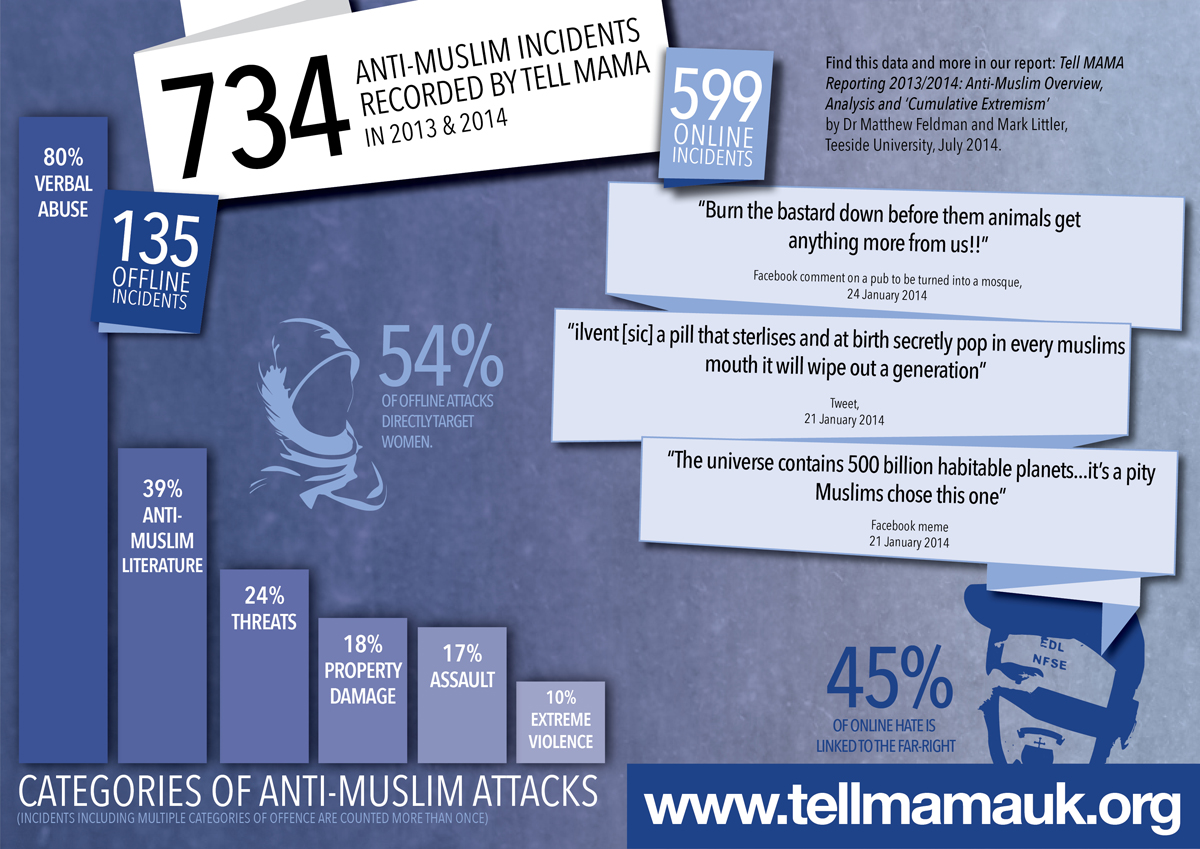 This is the latest anti-Muslim overview report which independently analyses the TELL MAMA data covering May 2013 through to the end of February 2014. The report looks at a number of trends on anti-Muslim prejudice and highlights a range of specific areas which include the fact that visibility, (by wearing the Hijab or the Hijab and the Niqab), may play a role in the targeting of individuals. Furthermore, the over-representation of Far Right sympathisers in anti-Muslim prejudice is highlighted once again. The report also covers the period after the murder of Lee Rigby and the anti-Muslim hate crime spike that took place after the murder. Lastly, the report should be read in conjunction with these links which provide more context on our work. The links can be found here, here and here.

Some of the key findings include:

– More than half of anti-Muslim incidents are committed against women (54 per cent); women were often targets because they wore traditional Islamic dress.

– The under-reporting of incidents remains a serious problem (nearly 5 out of six victims of offline and online abuse did not go to the police.)

In the past year alone, we took great care in improving the robustness of our data collection, following recommendations from stakeholders in the Department of Communities and Local Government (DCLG) and Community Security Trust (CST).

The CST’s wealth of experience in recording anti-Semitic abuse is a model that continues to inspire the Tell Mama project.

So what are the improvements?

– Before any data is categorised, senior members of Tell Mama staff independently verify that incidents are indeed anti-Muslim in nature.

– Islam is not immune from criticism and these changes will ensure better support for genuine victims of abuse.

– Any ‘scraped data’ that is not self-reported (from third-party sources, newspapers or other online sources) is discounted.

– Offline incidents are categorised as ‘property damage’, ‘assault’, ‘threat’, ‘extreme violence’ and ‘anti-Muslim literature.’ That way, a distinction between online and offline abuse is clear.

Cases now face a secondary random check from a senior member of the Faith Matters staff. A failure to meet the above criteria results in removal, triggering a full audit of the preceding week of reports.

But we should not downplay the seriousness of online abuse, and the hurt it causes victims, as often, it is not solved by simply walking away from the computer.

Both stats broadly follow the CPS statistics on racial and religiously motivated hate crimes in 2012/13. Yet, the most alarming difference is the volume of women (54 per cent) self-reporting hate crimes.

Attacks against visibly dressed Muslim females may not accurately explain away the trend of hate crimes being opportunistic and situational. The data suggests that the alleged perpetrators of anti-Muslim hate crimes at a street-based level, are young white males targeting Muslim women, and that is a cause for concern.

More than that, the Tell Mama data bucks the trend of hate crime reporting, which the government figures show as falling.

Following the murder of Lee Rigby, there was a dramatic increase in anti-Muslim incidents during the week following his death when compared to the previous week, but the volume of incidents did reduce months later.

Various police forces noted a rise in anti-Muslim hate crimes during this period:

– Anti-Semitic and anti-Muslim hate crimes rose by a third (to 206 and 523 respectively) across all 32 reporting boroughs of London. A fifth of anti-Muslim incidents took place in May alone.

– Greater Manchester Police (GMP) recorded an increase of religious hate crime, which rose from 31 recorded incidents in April to 47 in May, it did not return to its average spike (of 25 incidents) until July 2013.

– The Birmingham Mail reported that religious hate crimes increased by 63 per cent (to 82 offences) in the West Midlands.

The Role of the Far-Right

– Nearly half of online abuse is linked to the far-right, thanks to their use of the EDL’s NFSE (No f*cking surrender ever) slogan, avatars with neo-Nazi connotations, and hashtags linked to far-right groups.

– Another neo-Nazi, Ian Forman, plotted to bomb two Merseyside mosques in the aftermath of Rigby’s murder.

To quote from the report’s conclusion, “Various indicators suggest that anti-Muslim hate crimes notably rose in Britain between 1 May 2013 and February 2014.”