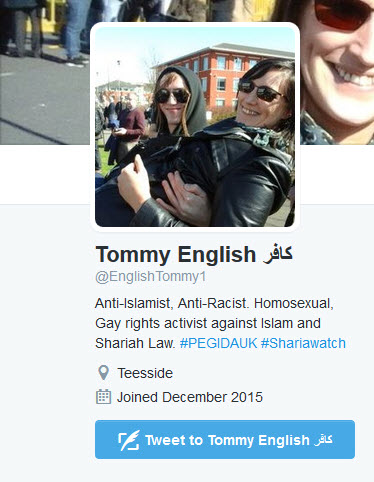 Anyone coming across this page would rightly think that this silent march was something that would not only show solidarity against the senseless murder of so many people enjoying a night out in the US, it would also provide an opportunity for communities to come together. Nothing on this Facebook page would point to the motives behind such a page and where community issues are being appropriated as potential fronts to draw in people who may have some deeply questionable views. A further investigation into this page shows that the organiser of the event is one ‘Tommy’. A further drill down into the background of the organiser brings forward the following, someone named Tommy English. Tommy English proudly lists ‘Kafir’ in Arabic in his Twitter profile, a good indicator that we are looking at someone who may have sympathies with anti-Muslim views. Further information that we have received has highlighted Tommy English as Tommy Cook, the former leader of the EDL’s LGBT Division.

The number of people with far right sympathies who have ‘Kafir’ in their social media accounts is substantive and we also highlighted the link between the high number of far right activists involved in anti-Muslim hatred online recently in our 2015 Tell MAMA annual report.

The link between far right activism and online hatred against Muslims is extremely troubling and spiked again in 2015. A further glance at English’s Twitter account shows the terms #Pegida and #Shariawatch indicating strong sympathies with the anti-Muslim group Pegida and sympathies with ShariaWatch, run by one Anne  Marie Waters. Waters recently became involved with Pegida, which is headed up by Paul Weston, who has previously said the following:

“If I want to avoid a civil war happening in my country, I am prepared to accept being called a racist“

Waters has also been caught making the following statements and which were reported in the Daily Mirror in early 2015:

“Ms Waters, who hopes to become MP for Lewisham East, South East London, was also filmed telling an undercover reporter “a lot of people need to be deported” and “many mosques need to be closed down”.

What is also interesting to note is that Waters will be speaking at this march organised by English.

Supporting and Standing in Solidarity with Other Communities

It is only right and moral to stand with other communities and Jewish and LGBT communities have recently been targeted for terrorist atrocities. Standing with, empathising and ensuring our joint security is key as is standing up for each other when targeted.