Arkansas: How the Masjid Al Salam cleared the debts of a man who vandalised it 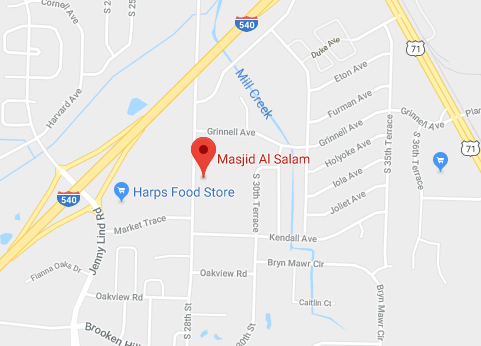 An Arkansas mosque has cleared the felony debts of a man who vandalised their building in October 2016, in a viral story about the power of forgiveness.

Louay Nassri, president of the Masjid Al Salam, said that the debt should not hang over the perpetrator for the rest of his life, according to Fox 16 and Arkansas Matters. Mr Nassri added that there should be ‘consequences’ for the actions of Abraham Davis, but they hold no ill feelings towards him.

Davis, who was twenty when the vandalism occurred, and Hisham Yasin, one of the founders of the mosque, have been profiled extensively by Sabrina Tavernise of the New York Times. Her reports paint a broader picture of both men, their backgrounds, the motivations behind the vandalism, and Davis’s quest for absolution in prison.

The vandals had daubed racially charged slurs which included “Go Home” and “We Don’t Want You Here USA”. Amid the swastikas was the Latin term “Deus Vult [It is God’s will]” – terminology from the Crusades. Thousands of miles away and months later, at a mosque in North Lanarkshire, Scotland, vandals dubbed this exact phrase and the words “Saracen Go Home”.

Both events, while unconnected and separated by borders and oceans, demonstrate how the iconography and language of the Crusades are repurposed by some today where ideologies require no such physical barriers.

If there was an ideological thrust to the vandalism, it came not from Davis, but his friend Craig Wigginton, who is said to have had a major influence on Davis, which concerned his mother. She told the New York Times that Wigginton had once referred to a Muslim woman in a hijab as a ‘sand monkey’. Wigginton had also praised Hitler. Hours before the vandalism, Craig, Davis and a friend had been drinking when Wigginton brought up ISIS and the deaths of American soldiers and children. Then, according to the New York Times, was the impulse decision to carry out the vandalism.

Davis participated willingly but went on to express regret at not his just ignorance towards Muslims but also his failure to stop the vandalism. In prison, white supremacist groups courted his attention, even offering him a tattoo which he declined. A Muslim inmate would be the first person to show him a copy of the Qur’an. His quest for forgiveness included a handwritten letter of apology to the mosque as he sat in prison.

Months earlier, Hisham Yasin told local media how the vandalism had brought communities together to heal and remove the graffiti. It’s why they never sought felony charges. Yasin said: “We as a Muslim community, we decide to drop our charges just to let them know we are we can forgive and we forgive them and we and we ask for mercy for them.”

The courts handed Davis a $3,200 fine, a decision the mosque had not sought. A failure to meet his monthly instalments would result in a six-year prison sentence. Some who had become aware of Davis’s story in earlier press coverage had donated to him. But a sizeable amount of debt remained.

A donation to mosque inspired them towards a further act of charity: they agreed to clear the remaining debts of Davis to the sum of $1,731.

Davis would inform the New York Times that he didn’t deserve it but was moved by their generosity.

The mosque never expected this personal act of forgiveness to capture the attention of a global audience.