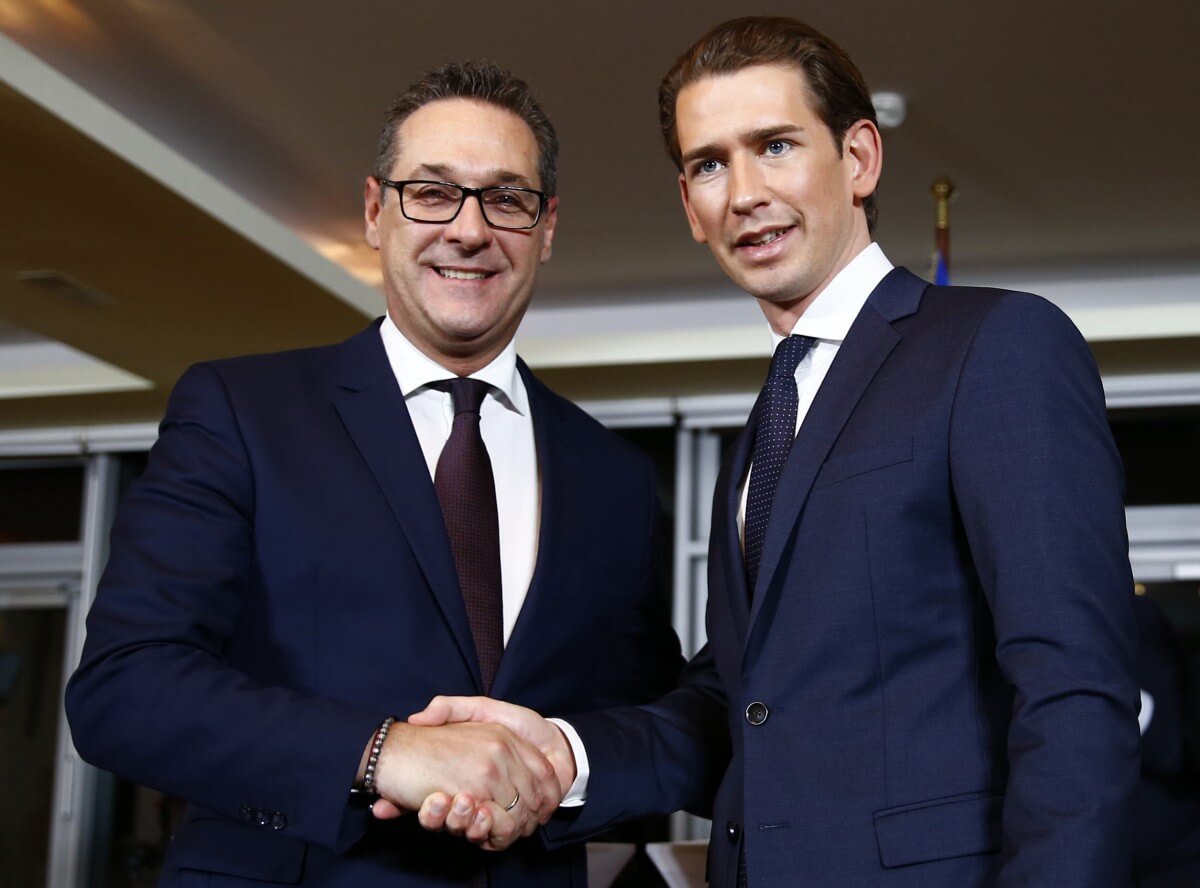 Austria is set to become the only western European country with a far-right party in government after the anti-immigration Freedom Party and Sebastian Kurz’s conservatives struck a coalition deal to share power almost equally.

In an early policy pronouncement, Kurz, the future chancellor, said the new government would not hold a referendum on European Union membership.

Kurz, who is just 31, and Freedom Party (FPO) leader Heinz-Christian Strache announced their deal on Friday night, handing the far right a share of power for the third time in the Alpine republic, after more than a decade in opposition.

The FPO will take control of much of Austria’s security apparatus, in charge of the foreign, interior and defence ministries. The People’s Party (OVP) led by Kurz will control the powerful finance ministry as well the justice and agriculture portfolios.

“No one need be afraid,” Austrian news agency APA quoted the incoming interior minister and chairman of the FPO, Herbert Kickl, as saying. Kickl began his career as a speechwriter for the late Joerg Haider, who praised Adolf Hitler’s employment policies and led the party to its first mainstream electoral success.

Kurz will head the government as chancellor and the OVP will have eight ministries including his office. The FPO will have six, including Strache’s office as vice chancellor.

Kurz has repeatedly said his government will be pro-European despite including the FPO, which was founded by former Nazis and campaigned against Austria joining the bloc when it was put to a referendum in 1994.

The coalition plans to make referendums more widely available. Unlike France’s National Front, the FPO has backed away from calling for a referendum on leaving the European Union but Kurz obtained a guarantee that a Brexit-style vote will not be held.

“There will be no votes on our membership of international organisations, including the European Union,” Kurz told a joint news conference with Strache.

Kurz’s office will also take over some European departments from the FPO-run foreign ministry to give him greater control over EU matters.

The 180-page coalition agreement listed plans such as sinking taxes and cutting public spending through streamlined administration though it often did not say how such goals would be achieved.

Austria’s parliamentary election two months ago was dominated by Europe’s migration crisis, in which the affluent country took in a large number of asylum seekers.

Kurz’s party won with a hard line on immigration that often overlapped with the FPO’s, pledging to cut benefits for refugees and never to allow a repeat of 2015’s wave of arrivals. The FPO came third in the election with 26 percent of the vote.

Kurz and Strache held their news conference outlining the agreement on the Kahlenberg, a hill on the outskirts of the capital famed as the site of the 1683 Battle of Vienna, which ended a siege of the city by Ottoman Turks.

While there was no specific mention of repelling that Muslim invasion, the symbolism is clear for two parties that have warned Muslim “parallel societies” are emerging in Austria.

Kurz, however, told reporters: “I did not take the decision on where the press conference should be held…. I would not read too much symbolism into it.”

Strache and Kurz oppose Turkish membership of the EU, a position that polls regularly show most Austrians support.

“We both recognise about 75 percent of ourselves in the programme,” said Strache, who accused Kurz during the campaign of stealing his party’s ideas. “That might have something to do with the fact that one or the other maybe took on the other’s policy points before the election.”

Anti-establishment parties have been winning over more voters in Europe, capitalising on dissatisfaction with mainstream politicians’ handling of the economy, security and immigration.

While other far-right parties have gained ground this year, entering parliament in Germany and making France’s presidential run-off, the FPO is going further by entering government and securing key ministries.

“It is excellent news for Europe,” Marine Le Pen said of the coalition deal at a Prague meeting of her National Front party’s European grouping, which includes the FPO. “These successes show that the nation states are the future, that the Europe of tomorrow is a Europe of the people.”

Both the OVP and FPO believe the EU should focus on fewer tasks, like securing its external borders, and hand more power back to member states.

When the FPO last entered government in 2000 other EU countries imposed sanctions on Vienna in protest. There is unlikely to be a similar outcry this time, given the rise of anti-establishment parties across the continent.