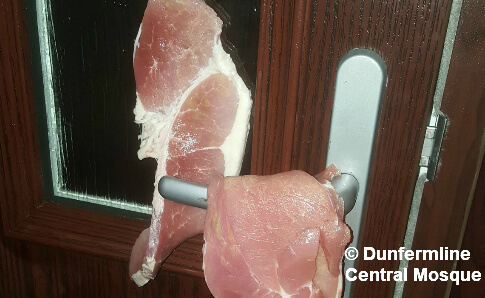 Strips of bacon were left on a door handle at Dunfermline Central Mosque over the weekend.

CCTV footage of the incident on April 28 has been passed to Police Scotland to investigate.

In a statement, the mosque said it was a “deliberate symbol of hatred chosen as Muslims and Jews do not eat Pork”, in a statement published on social media yesterday evening.

We are disappointed to report that the Mosque was attacked over the weekend and bacon left on one of the doors. This act was a deliberate symbol of hatred chosen as Muslims and Jews do… https://t.co/yzbwJfhYln

The mosque said it will not be ‘intimidated’ by the attack and intends to continue its engagement with all communities in Dunfermline which has included various open events, including a ‘race against racism’ day on April 28.

Such events, according to the statement, have shown the mosque that “the vast majority of people of Dunfermline have shown us nothing but love and support”.

On Facebook, one man wrote: “As a Scottish Muslim I am feeling very proud to see so much love and support from the people of Dunfermline.”

Local police will be increasing patrols around the mosque during the month of Ramadan.

Tell MAMA has published safety tips for individuals and masjids.

Some basic safety tips for #mosques this Ramadan. We can send volunteers to your mosques to risk assess if need be. We are here. pic.twitter.com/3FTZmbBNUo

We have catalogued more than one hundred incidents against Islamic institutions since May 2013 in an interactive map (where the information is in the public domain).

Other have documented how bacon has been ‘weaponised’ against Muslims.