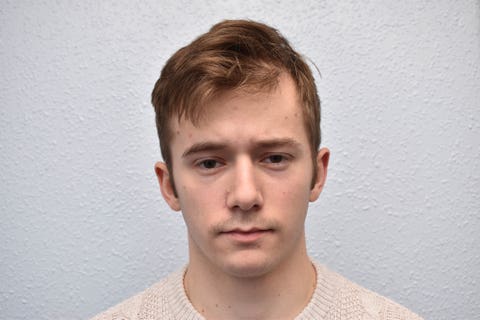 Frustrated at being rejected by his Muslim girlfriend’s family, Hannam was swallowed up by a dangerous online world.

It led him to join NA’s London branch, seduced by free stickers, outdoor activities and the friendship of a “cool” big brother-type figure.

Even after it was banned in December 2016, Hannam – who has autism – continued to associate with some of the same people.

He was filmed spray painting fascist graffiti just weeks before he applied to join the Metropolitan Police in July 2017.

Hannam, now aged 22, of Enfield in north London, was brought up by his single parent mother along with two sisters and a younger bother.

Since his father left, he referred to himself as having “control of the house”, the Old Bailey heard.

Hannam said his “gay” grandfather tried to provide a “fatherly” role, but he had more recently suffered from cancer.

During the pandemic, it was his Jewish step-grandfather “pops” who was the “pillar” of the family, he said.

Despite purporting to have friends with different ethnic backgrounds, Hannam appeared to foster “intolerant” views at Winchmore School in Enfield.

History teacher Lisa Hughes told the court that during a Brexit debate in 2016, in which he spoke for leaving the European Union, Hannam made “inappropriate” anti-immigration comments and “came across as offensive to students”.

In May 2017, she refused to submit an A-level politics dissertation because of his “intolerant” view of Islam.

Hannam was referred to guidance adviser Hafida Zitouni, who described him as “respectful” and “polite” even though he avoided the issue.

Over the course of around 15 sessions, he spoke instead about his frustrations that his Mauritian Muslim girlfriend’s parents did not accept him.

Giving evidence, Hannam described the difficulties in his three-and-a-half-year secret relationship, which began in 2014.

He said his girlfriend’s parents were “really strict” and “hated” him, even though he tried to study Islam.

At the time, his interests ranged from Japanese anime, Dungeons and Dragons and languages – including the Lord of the Rings’ Elvish.

From the age of around 16, he also developed a darker fascination with fascism, which he was exposed to online through 4Chan, an anonymous bulletin board.

He said he was drawn into it through the artwork and imagery of fascism, which he likened to Star Wars Stormtroopers.

Hannam told jurors: “It was the look and aesthetic of fascism that started it. The bold look of the images.”

The defendant said he went in search of friends he could talk about politics with, because he “struggled socially”.

“My interests were always vastly different from everyone else’s. When I was at secondary school, after my dad left I got stuck with a behavioural team.

“At secondary school my interests were fantasy and Dungeons and Dragons. It’s really Big Bang Theory-esque.

“I could not discuss politics with anyone. I felt very lonely.”

In 2014, he said he downloaded mass killer Anders Breivik’s extreme right wing manifesto because it was “free”.

He claimed only to have read the first 20 pages, finding it “boring”, although he kept the copy.

Hannam, who had Nazi-style posters by his bed, said he first became aware of NA through discussions on 4Chan.

He said: “Originally the long-term thing was the social isolation and the short-term thing I was on 4Chan and they were pumping out these good quality pictures and I thought these are really professional.”

He emailed the London branch of NA after watching co-founder Benjamin Raymond saying he wanted “university educated young men” on the television, he said.

During his first meeting at a pub in Paddington, Hannam was impressed by the organiser Ivan, who handed out free stickers and NA badges.

Afterwards, he wrote in his diary they were a “good bunch of lads” and that he “cannot wait to get more involved”.

Hannam said he was instructed to join fascist web forum Iron March, where he found more extremist literature and images.

Hannam said: “I had not heard of Iron March until Ivan told me.

“At the meeting I was really really impressed by Ivan. Handsome, confident, intelligent. He seemed really happy I showed up. He was giving me free stuff.

“He said if you want to come and hang again you have to make a post on Iron March, a right wing website.

“The purpose was to increase the clout. At the time I do things without questioning them and that’s really obvious when you ask my sergeant in the police.

“Ivan just told me to do it. I thought he was really cool. I said OK.

“He said mention (NA co-founder) Alex Davies and mention some Nazi stuff and I thought it was just an introductory post.

“He said after you’ve been approved you have to keep posting otherwise your profile is closed.

“You’ve got to say things in the website that fit in with the ideology.

“I was desperate for his approval. I just felt he was a much cooler older guy.”

Hannam went on to attend the NA conference in Liverpool and went to boxing and graffiti events even after NA was banned.

But he insisted he had never been a member of NA because he did not go to demonstrations or banner drops.

He said: “I stuck to social activities. Most of the time was going to the pub and going for walks.

“Other times camping or going boxing. Often it was just young men meeting up getting some snacks and some food and going for a walk.”

Towards the end of his association with NA, Hannam said he had been beaten up and the last straw was hearing a “Satanist” talk about the rape of women, he claimed.

Describing the alleged incident, he said: “One guy had a machete, literally frothing from the mouth talking about raping women and I said ‘how can you say that, you have a mum, how would you feel if your mum heard you say this’.

“I was sick of hate. I was fed up. They kept giving me things for free. I just wanted to hang out with them. In the end it got too sick. That was it. I left.”

Hannam denied he had ever been a member either before or after NA was proscribed.

He also claimed that NA was “not similar to the BNP” as it was not a political party.

But when he launched the organisation, Mr Davies was quoted as saying: “We are like the BNP but more radical.”

Professor Matthew Feldman, Director of the Centre for the Analysis of the Radical Right, was asked for his assessment of how far Hannam had been radicalised.

The expert on post-war right wing extremism said: “The physical and digital items possessed or communicated by Mr Hannam is consistent with engagement with right-wing extremism, in particular adherence to fascist ideology and potentially veiled but none-the-less evident neo-Nazi mindset.”