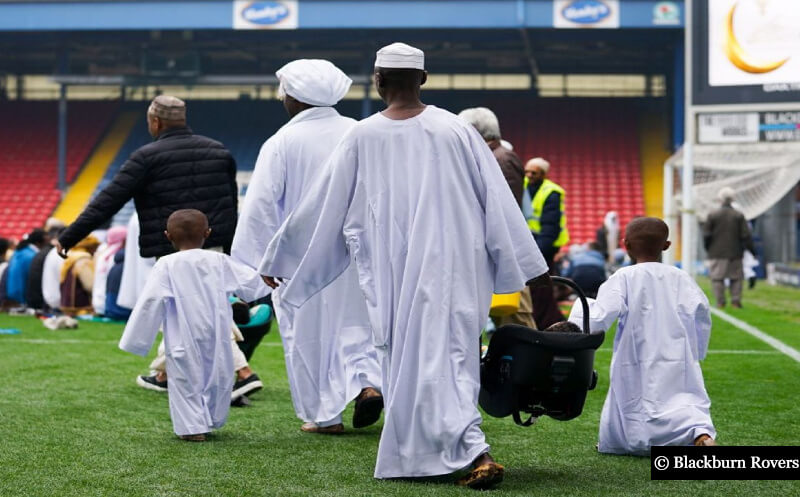 Blackburn Rovers made history as the first UK-based football club to host Eid prayers inside their stadium.

🌙 #Rovers today became the first football club in the country to host the Eid prayers on the pitch.

Over 3,000 attendees brought their prayer mats to Ewood Park for the Eid Salaah prayers, which celebrate the end of the holy month of Ramadhan.

Sheikh Wasim Kempson led prayers as local politicians also spoke, including the Mayor of Blackburn, as did the Chief Executive of Blackburn Rovers, Steve Waggott.

Yasir Sufi, integration manager at the Championship club, said: “It shows that we are all one, no matter who you are or what your identity is, the football club is somewhere where you belong.”

In a press release, Rovers CEO Waggott detailed what steps the club has taken to be more inclusive for Muslim communities, “We’re the first club to ever host the Eid prayer on the pitch, which is great, but it follows on from the last few years of having a prayer room installed, having alcohol-free bars, having Halal food, launching an Ewood Express service to bring young people and families to the stadium.”

Speaking to Sky Sports News, Sheikh Kempson added, “This is a good example for all clubs around the country to show that they’re taking on diversity and moving forward and engaging with the local community and that we can work together on so many different things.”

🗣 "We are very grateful for Blackburn Rovers to open their doors, literally, for us to pray on the pitch"

Blackburn Rovers is the first English football club to host Eid prayers at the stadium 👇 pic.twitter.com/tiakwFbAex

Eid in the Park, which assisted with catering the event, tweeted their gratitude to Rovers and its charitable arm, “thank you for hosting us and for all your hard work in bringing people together leading up to such a historic day. Your efforts have really done Blackburn proud. ONE CLUB – ONE TOWN – ONE COMMUNITY.”

Throughout the blessed month of Ramadan, other football clubs took welcome steps to be inclusive of Muslim communities, including Preston North End, which hosted hundreds of Muslims who broke their fasts with defender Bambo Diaby. The club wanted to foster an inclusive environment so it ” becomes a familiar space and feels like home”. The Championship club also added a second multi-faith prayer space to allow Muslim supporters to pray during Ramadan. In addition, in solidarity with the national campaign with refugees (#FootballWelcomes), the club’s charitable arm donated t-shirts during a “break your fast” community event.

Muslims in Newport, Wales, got involved in midnight football sessions during Ramadan after breaking their fasts, run by a local charity.

In the Premier League, West Ham players and staff welcomed Muslim supporters to a special Eid event, as the league has received further praise for helping Muslim players – improving understanding and accommodating needs.

We saw this in action during Southampton’s clash with Burnley – which stopped play to allow Muslim players to break their fast.

We’ve learned from Liverpool’s Sadio Mane, Leicester’s Wesley Fofana, Bournemouth’s Siriki Dembele, to Sheffield United’s Iliman Ndiaye and Rhian Brewster how clubs are integrating Ramadan into the dietary needs of their Muslim players. In the lower leagues of English football, AFC Wimbledon interviewed midfielder Ayoub Assal about what Ramadan means to them.

Wolves and the Welsh Football Association have been signatories to the Muslim athletes charter, which clubs have taken up in other sports, including rugby and cricket.

The Aston Villa Foundation distributed Iftar packs to the vulnerable during Ramadan as part of the more expansive Football Welcomes campaign supporting refugees.

Liverpool also allowed a Muslim fan who, upon asking stewards about a place to pray, described how they took him to the multi-faith prayer space and allowed him to return to the match as Liverpool defeated Manchester United 4-0 at Anfield. In early April, Liverpool FC’s foundation arm also worked on a special Ramadan event in the city.

In late April, the Premier League adopted the historic British South Asians in Football plan alongside Kick It Out to help address the structural and institutional barriers preventing South Asian footballers from turning professional. According to the PFA, just 0.45 per cent of players across England’s top four divisions are from a South Asian background.