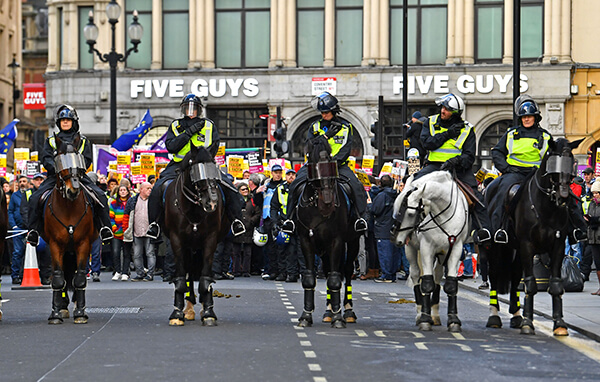 The divisive potential of Brexit could lead to a “creeping rise” in people being radicalised by far-right extremism, a police chief has warned.

Assistant Commissioner Neil Basu said the “febrile” atmosphere surrounding Brexit could give rise to division, allowing a way in for far-right extremist ideology.

Mr Basu said there was no intelligence pointing to an increased risk of terror attacks after Brexit, but he was concerned about a potential rise in hate crime.

The head of UK counter-terrorism policing said: “What’s most concerning me about Brexit is its potential to divide communities and set communities against each other.

“So what we saw after the referendum (in 2016) was a rise in hate crime, and a rise in far-right rhetoric, and we have seen the growth of organisations like National Action, and what I want to make absolutely clear is that we are concentrating very heavily on making sure that doesn’t get a foothold in this country.

“I’m really proud to be a UK citizen in a country that is largely tolerant, and we haven’t seen an explosion in that threat.

“What I’m concerned about is the creeping rise of that threat, and if we aren’t clear that we are combating that threat then that’s my concern.

“It’s still a relatively small threat compared to what we have faced from al Qaida in the past and Islamic State over the last four years or so.”

Earlier this month Scotland Yard was forced to increase its presence in the political heart of London after Tory MP Anna Soubry was branded a Nazi by a mob during television interviews and was then followed to the Palace of Westminster.

Mr Basu acknowledged the policing in place at the time “wasn’t assertive enough to stop who were intent on being intimidating”.

It comes as Labour MP for Great Grimsby Melanie Onn tweeted some of the abuse she has received, calling her a “traitor” and warning her to “Watch your back as you will not be forgiven”.

Appealing for “calm reflection and debate”, Mr Basu told BBC Radio 4’s Today programme: “We have seen some of the behaviour from very, very small groups.

“If you think about what happened outside of Parliament just before Christmas and just after Christmas, we had months of very peaceful, very lawful, no problems protest outside Parliament.

“Then a very small group of people managed to turn that atmosphere and that cannot be right. We must make absolutely sure that doesn’t happen.”

Mr Basu said he finds the prospect of a no-deal Brexit “incredibly concerning”.

Leaving the European Union without continued access to shared data and intelligence systems would put the UK and Europe in a “very bad place”, he said.

Mr Basu said: “For counter-terrorism we have a lot of bilateral relationships, it is a devolved power for countries, it is not an EU power, so we are confident that my counterparts in those 27 countries want to exchange information with us and we are working very hard to make sure we put that in place.

“But nevertheless, to leave without … being able to exchange data or biometrics on people who might be criminals or terrorists would be a very bad place for this country, and for Europe, to be.”

Mr Basu said there was a central team working on contingency plans, while counter-terrorism police liaison officers were “embedded” in embassies and agencies in Europe.

He said: “They are working very hard with their counterparts to understand how we cope if there is a no-deal Brexit, but as I said, a no-deal Brexit for operational security would be a very bad thing.”

Mr Basu was speaking at the launch of a major cinema advert campaign to increase awareness of suspicious activity and encourage people to report it to police.

The 60-second film shows a series of scenarios, such as a man stockpiling hazardous material and another buying weapons, before rewinding and zooming in on the danger.

In 2017 and 2018, around a fifth of the information passed to police from the public had a “significant” role in thwarting attacks, he said.