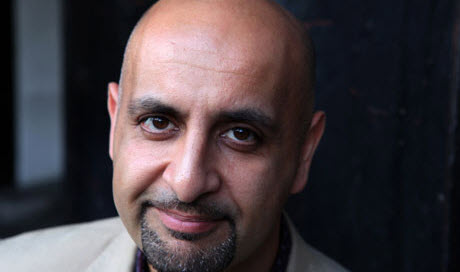 The Head of Religion and Ethics in the BBC, Aaqil Ahmed, recently posted this blog on why he made the decision to hold ‘Songs of Praise’ from a small community built church in the ‘Jungle’, a piece of land where refugees desperately try and maintain a meagre pitiful existence in Calais.

Aaqil Ahmed provides some reflective thoughts in his blog about Christian traditional beliefs which reflect on the poor and the dispossessed and this was one of the reasons why he discussed holding a session for Songs of Praise with the team.

Yet, a decision made on the basis of highlighting and discuss dispossession, ethics, religious values and the celebration of faith, has led to far right groups like Britain First attracting the following comments, (below), on their Facebook page, targeting the faith of Aaqil Ahmed himself.

The shocking comments underline the hatred that this group attracts and once again, we urge members of the public to contact Facebook and report in comments that promote bigotry and prejudice. Some information on reporting in comments can be found here.

Xander Van Mourik said: “Are you stupid to place a Moslem (sic) in the too (sic) of the BBC. Than (sic) you are naief (sic).”

Fran Hodson said: “I will never look at BBC again having a dirty Muslim in charge.”

Billy Cully said: “Muslims and paedos in the BBC nothing surprises me about what they say, I watch or listen nothing from them, scum.”

Roland Galway said: “Can you expect this Muslim to be objective. Now even the BBC is being taken over slowly by the Muslims. No wonder their (sic) are becoming more biased.”

Key themes always come up in far right web-sites and through such bigoted posts. Here, the faith and identity of Aaqil Ahmed is mentioned, where bigots assume that being Muslim means being impartial. They also perversely, trot out the ‘Muslims are paedophiles’, line that has been promoted by far right groups after Rotherham and we have written about this before.

Assumptions made that ‘Muslims will take over’ are also reminiscent of the kinds of anti-Semitic tropes that were used against Jews in Germany and within the UK in the 19th and 20th centuries and were a way of trying to keep Jewish communities away from the employment market, leading to many setting up businesses to work and support Jewish communities. The impacts of such discrimination affected Jewish communities for millennia in Europe and were a disgrace. Today discrimination, has sadly, found a voice through the targeting of Muslims, resurgent anti-Semitism, and hate targeted towards refugees and migrant communities, including the Roma in Europe.