Britain First ‘to register as political party’ in Northern Ireland 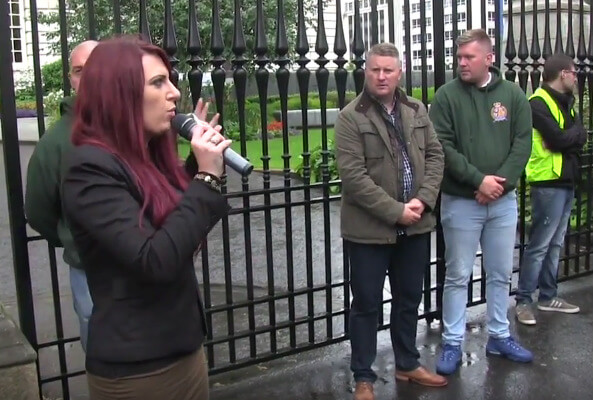 The leader of Britain First has claimed to have registered the party in Northern Ireland and intends to run candidates.

Paul Golding made the comments during the so-called Northern Ireland Against Terrorism rally in Belfast on August 6.

Britain First hope to return to Belfast for a ‘larger’ rally next month.

Jolene Bunting, the independent Unionist, drew the ire of many after inviting Paul Golding and his deputy Jayda Fransen to the rally but has distanced herself from any potential candidacy.

The rally fell on the same day of a republican parade marking the anniversary of British internment without trial in Belfast, but they were denied entry into the city centre.

Officers from the Police Service of Northern Ireland (PSNI) separated 50 far-right Britain First supporters and members of the ‘Belfast Says No to Fascism’ group. One arrest was made after an individual threw an object at Ms. Fransen.

During the rally, Ms. Fransen told supporters: “The world is at war with Islam. Every single Muslim is obliged to kill you and your husbands and your wives and your children.”

A PSNI spokesperson confirmed that footage of the rally is being reviewed to “determine if any offences have been committed.”

Britain First has done minor activism in Northern Ireland since 2014, but this shift into the political arena may only serve as a cosmetic attempt at building legitimacy in the region.

On Facebook, a ‘Britain First Northern Ireland’ page became active on August 7, but there’s no indication yet that it belongs to the group. In 2013, Paul Golding wrote: “The Loyalist/Unionist population of Northern Ireland represents the best of British patriotism and loyalty.”

This latest move mirrors the National Front, who registered as a political party in Northern Ireland in 2015 according to the Electoral Commission but have yet to field candidates. Despite being registered in Northern Ireland, the National Front list a PO Box address in Hull as their main address. In 2012, two men were arrested in Belfast following allegations that National Front leaflets had been distributed in the Tates Avenue area. The history of this movement in the region dates back further still.

The Electoral Commission is now assessing the Britain First submission, according to the Irish News.

Tell MAMA has approached the Electoral Commission for further comment.