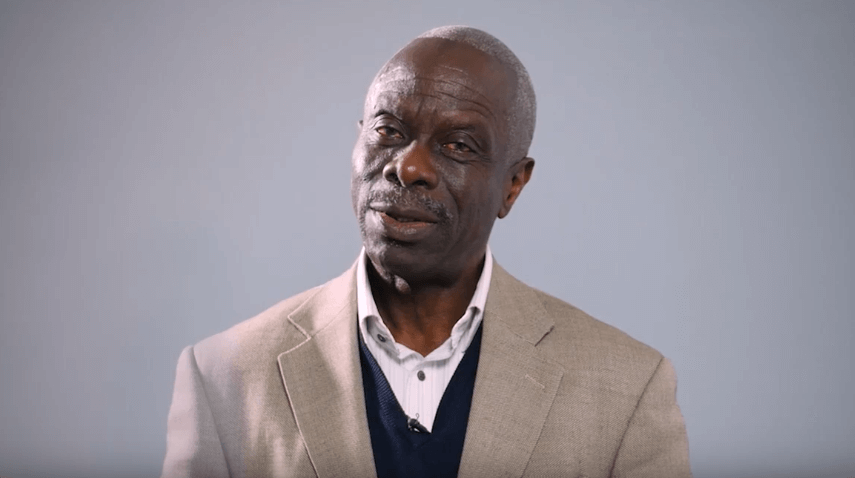 A Christian man whose arrest went viral amid accusations of preaching racism has shared anti-Muslim content online, including videos from the far-right movement Britain First, a Tell MAMA investigation has found.

The preacher, later identified as 64-year-old Oluwole Ilesanmi, was arrested in June 2017, after claiming that there was a link between terrorism and the Qur’an, but the Crown Prosecution Service later dropped charges against him, according to the controversial group Christian Concern. A press release from Christian Concern referenced Mr Ilesanmi in January 2018.

On Facebook, Mr Illesanmi has shared videos from the street-defence movement Britain First, including their infamous ‘Christian Patrol’ in Luton. 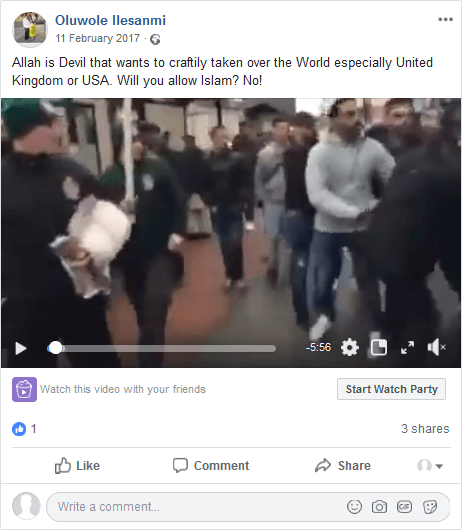 He wrote “Christianity in CHRIST JESUS is RECONCILING sinners to God Almighty, but Islam in Allah is NOT a religion of PEACE; only Killing, Deceiving, Terrorising, and Hatred of the people” in a Facebook post shared on November 30, 2018. A tweet with the same text appeared on the same under the @IlesanmiOluwole account at 9:10 am – two hours before the post appeared on Facebook. 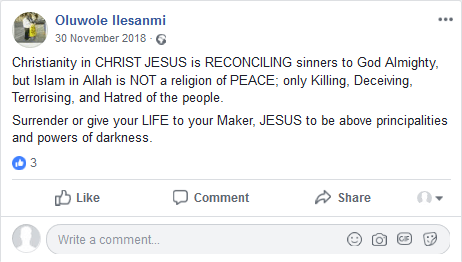 On the anniversary of the 9/11 terror attacks, he shared an Islamophobic meme purporting to show how the Qur’an justifies terrorism and murder. Mr Illesanmi captioned the post, “ISLAM, WHY THE HATRED OF THE WORLD?”. 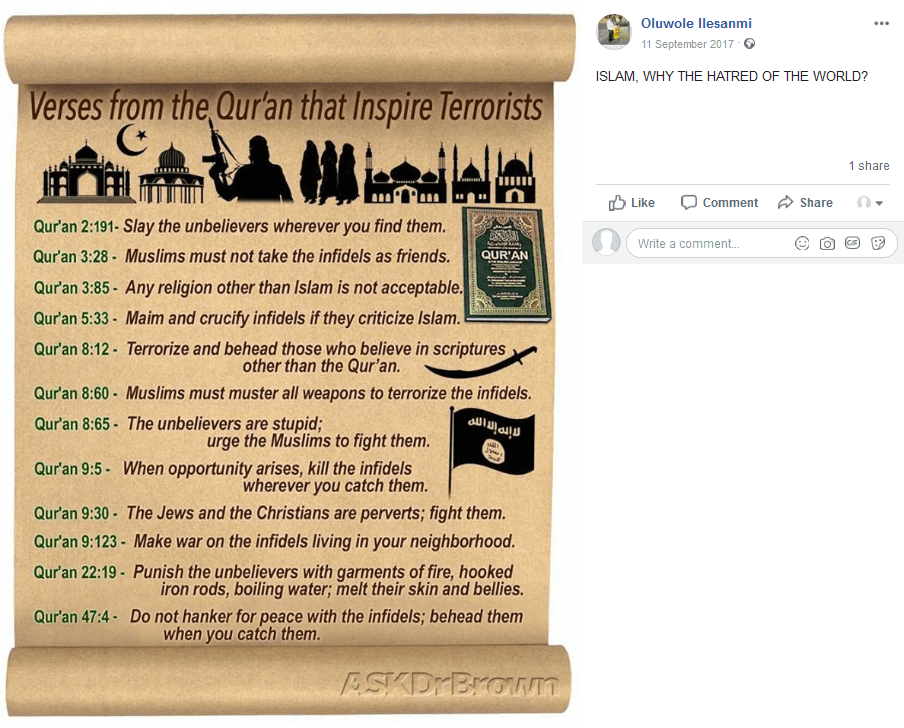 Months earlier, he shared a scaremongering video featuring several known far-right figures, including Paul Golding of Britain First and Paul Weston of Pegida UK, and captioned it, “WAKE UP BRITAIN! You gave these people immigration liberty, now they are Islamizing UK. WILL YOU ALLOW? PLEASE WATCH!”. 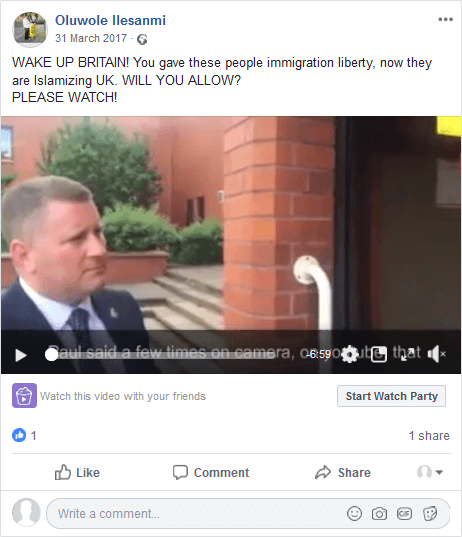 On February 11, 2017, he wrote that ‘Allah is Devil’, and a week earlier, promoted the conspiracy theory of Islamisation. In a comment written below the latter, Mr Illesanmi added that Muslims are “flooding” parts of London, and warned that the election of London’s first Muslim Mayor Sadiq Khan, was a cautionary tale, as Muslims would target 10 Downing Street. 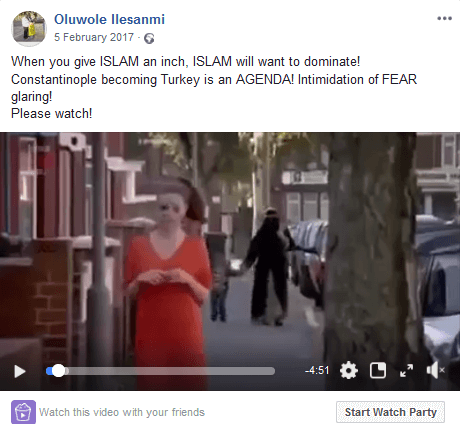 Oluwole Ilesanmi also shared a post from the Christian news outlet Premier following his acquittal in 2017. 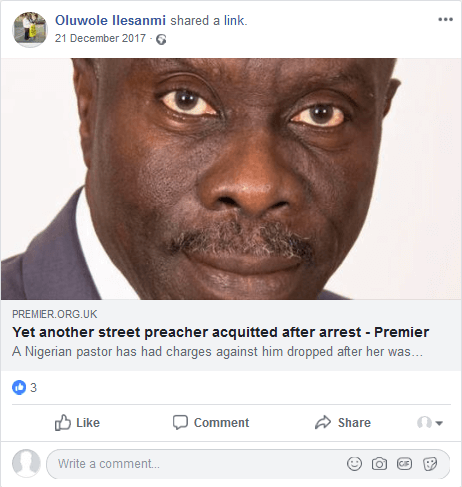 Other examples of inflammatory content include the sharing of a video which suggests that the word Allah (Arabic for God) translates as “satanic” in nature. 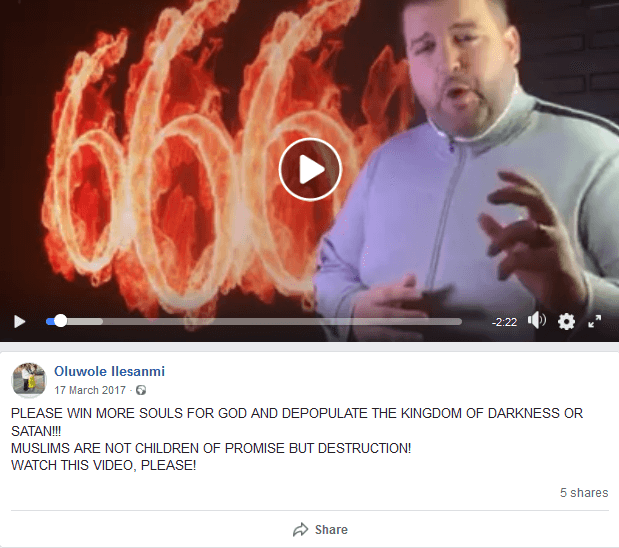 He has also posted that homosexuality is an “abomination to God Almighty”. 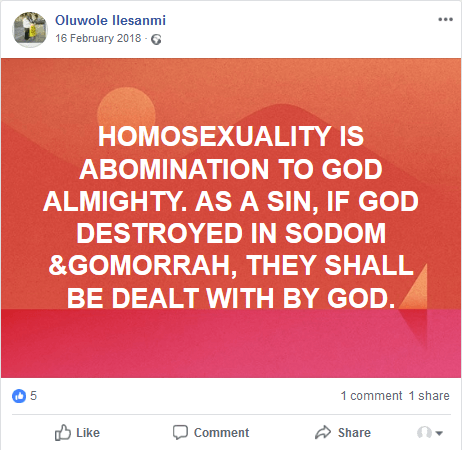 The most recent video of Mr Illesanmi’s arrest, dated February 23, 2018, was included in a video by the Leave.EU campaign, which contrasted this arrest with how West Midlands dealt with a Muslim preacher, in a video which evokes the idea of Christian oppression and Muslim favouritism, narratives that echo in many far-right and radical right social media spaces. Some of the top-rated comments below the video perpetuate this Islamophobic narrative.

The Leave.EU video, as of writing, has been viewed over 3 million times on Facebook and gained almost 70,000 shares, includes top rated comments like “Welcome to England where we have less rights than those who come from abroad,” and “This is just not acceptable anymore 😡 the tide is going to turn and when it does there will be civil war 😡.” Both comments gained over two-thousand likes, suggesting that many other fans or readers, agreed with their anxieties and prejudices.

But the Leave.EU video is misleading in several ways, including the fact that Mr Illesanmi was de-arrested and was able to return to the same location and preach without interference hours later.

The other preacher featured in the Leave.EU video is Krissoni Henderson, who, in September 2016, was found guilty of religiously aggravated threatening behaviour. Mr Henderson called a Muslim woman named Noor Alneaimi a “prostitute” and told her that she would “burn in hell” for wearing “tight jeans” in Birmingham’s New Street on July 4, 2016. The prosecution argued that Mr Henderson had threatened to follow Ms Alneaimi home and “blow her up”.

Mr Henderson was briefly arrested then released without charge in December 2016 after a confrontation with a cyclist in Birmingham.

The Leave.EU video is, therefore, nothing more than thinly-veiled propaganda.

Helen Millichap, Borough Commander, said in a statement shared by the former Conservative MP David Burrowes, that: “At approximately 13:55hrs on Saturday, 23 February, police received a 999 call from a member of the public who was concerned about a man’s behaviour – and language – outside Southgate Underground Station.

The caller advised officers that they had heard the man making Islamaphobic statements, and as a result, he had been confronted by a small number of people. Officers attended and spoke with a second witness who supported the allegations made by the original caller.”

Mr Ilesanmi was arrested to prevent a breach of the peace after he refused to leave, the statement adds.

A complaint against the arresting officers came from a third-party and will be subject to the review of the Professional Standards Unit.