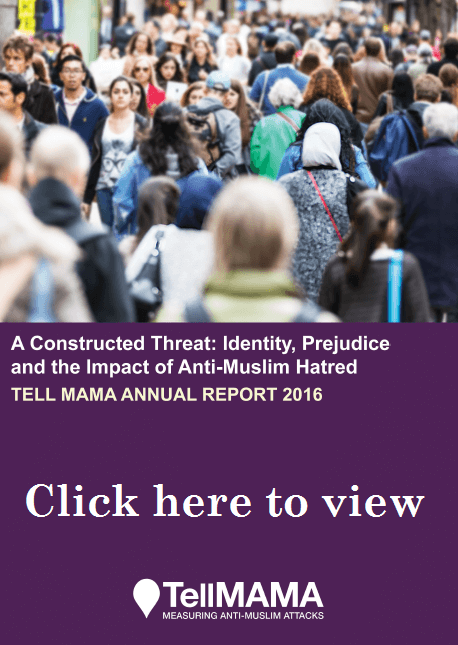 Given the impact of anti-Muslim hatred on the mobility of Muslim women and on the personal life choices that they make, the impacts are also felt within the family and have implications for integration and social cohesion. Tell MAMA re-enforces the need for greater awareness within police forces about the intersectional and gendered nature of anti-Muslim hatred at a street level and the negative perceptions that it can build within victims and their families, around their place and future in communities

Tell MAMA’s annual report for 2016 finds a range of social impacts caused by anti-Muslim hatred within the United Kingdom. The greatest impact is again felt by visible Muslim women, who wear Islamic clothing, be it the headscarf (hijab), face veil (niqab), the abaya, or a combination of garments. Commensurate with our 2015 annual report, 56% of victims in in-person or street-based incidents were females.  A majority of perpetrators are male 66%, and where identifiable, 69% of perpetrators for such offences are white males. The language of some perpetrators also had misogynistic overtones, meaning that women were abused for their gender and religious identity.

Consistent with broader research, anti-Muslim hatred in 2016, as with our previous annual report, is overwhelmingly an issue of abusive behaviour, with over half (54%) of all our reports falling under the flag of abusive behaviour, which is a 4% rise on the 2015 annual report. The abuse is verbal or non-verbal in spaces that occupy the day-to-day lives of Muslims. Meaning such incidents took place in public areas, which include streets, public parks and any other public space, on transport networks, the workplace or when out shopping. Perhaps most invasively, this day-to-day form of abuse can happen in and around the homes of Muslims, harming their sense of safety and limiting their social mobility. A lack of intervention from members of the public during incidents, especially on public transport, can compound the deeper psychological impact that a hate crime can have on a person, compared to equivalent non-aggravated offences.

The report launch coincides with the annual #No2h8November awareness month to highlight how communities, key partners, and society at large works to counter the scourge of hatred and racism.