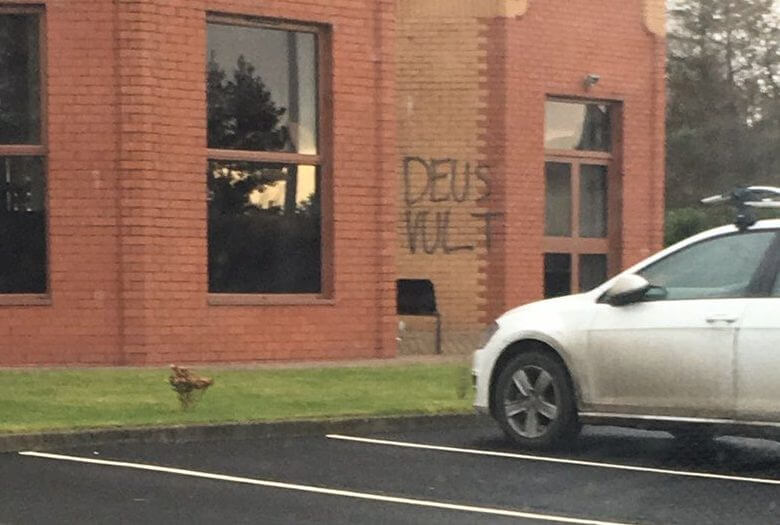 The following pictures from Amjid Bashir (@amjidb) highlight graffiti that has been placed on Cumbernauld mosque in Glasgow.

This is not the first time that the mosque has been targeted and in 2014 it had been targeted by an offshoot of Britain First extremists.

The pictures show the words ‘Saracen Go Home‘ and with the term ‘Deus Vult‘ next to it on the walls of the mosque. ‘Deus Vult’ which is classical Latin for ‘God wills it‘ was a term used by people at the declaration of the First Crusade by Pope Urban II, as a rallying call for the defence of the Byzatine Empire against the Seljuk Turks who were entering what is now modern-day Turkey. Additionally, Saracen was a term used in the Crusades to describe Muslims and the graffiti is therefore an attempt to enact imagery and thoughts related to historical events and language around the Crusades.

Given the language and the imagery being conjured up, we believe that the individual who did this is ideologically driven and may well be radicalised by extremist far right rhetoric which regularly plays on imagery and text from the Crusades, as though there is a clash of civilisations taking place. We hope that Police Scotland take this into consideration if an arrest is made. Anti-Muslim graffiti on the walls of Cumbernauld Mosque in Glasgow. The graffiti conjures up text and terms used in the First Crusade