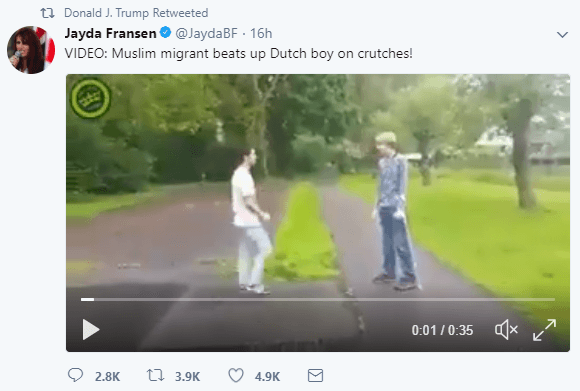 Within minutes, the accounts of leader Paul Golding, Britain First, and Jayda Fransen synchronised their tweets to read “THE PRESIDENT OF THE UNITED STATES, DONALD TRUMP, HAS RETWEETED THREE OF DEPUTY LEADER JAYDA FRANSEN’S TWITTER VIDEOS! DONALD TRUMP HIMSELF HAS RETWEETED THESE VIDEOS AND HAS AROUND 44 MILLION FOLLOWERS! GOD BLESS YOU TRUMP! GOD BLESS AMERICA! OCS @JaydaBF @realDonaldTrump.”

Fransen is on bail in relation to the distribution of leaflets and the posting of online videos during a trial held at Canterbury Crown Court in May. Fransen breached her bail conditions by going on a far-right tour of Europe and was arrested during a protest in Sunderland on October 14.

The Home Office has, on two occasions, stopped the antisemitic and anti-Muslim Polish priest Jacek Międlar, from speaking at Britain First rallies.

A day earlier and Fransen appeared on the neo-Nazi Radio Aryan show with Dave Russell.

She will also appear in court in Northern Ireland next month charged with using threatening and abusive language in connection with a speech she made at a demonstration in Belfast on August 6.

Fransen was convicted of religiously aggravated harassment in November 2016 after abusing a Muslim woman in Luton during a self-styled ‘Christian Patrol’ in January 2016.

The party, which has never shied away from its ‘street defence’ credentials, held an ‘Activist Academy’ where activists “learnt various self defence combat sports, including boxing, Muay Thai, wrestling, Brazilian Ju-Jitsu and Krav Maga,” in April 2014.

Tell MAMA strongly condemns the actions of Donald Trump as the politics of Britain First has no place in our society, given their extremist views towards Muslims, the Romani and other communities, where they seek to sow division over dialogue, which promotes a vision of this country that is at odds with any sense of common decency, pluralism or religious and cultural tolerance.

Today is a sad demonstration of how far extremism has moved further into the mainstream.