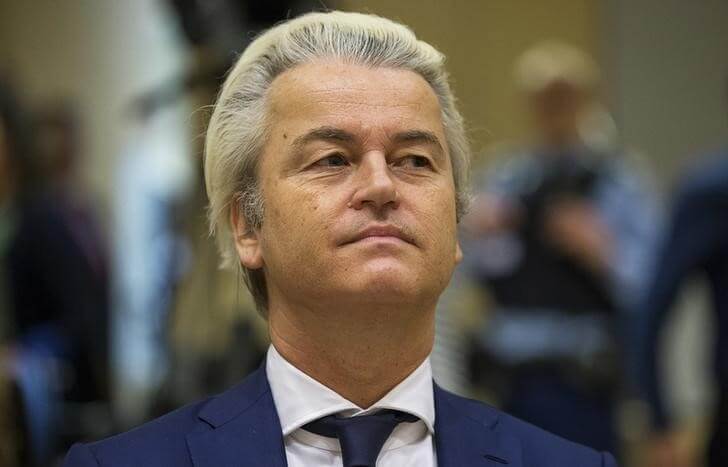 Geert Wilders, the Dutch politician leading calls for an EU ban on Muslim immigration, defied prosecutors in his discrimination trial on Friday by repeating in court that he wants “fewer Moroccans” in the Netherlands.

Wilders is accused of inciting hatred and discrimination against the Moroccan minority, in a trial that coincides with heated debate in European Union countries about the million or more people who have poured into the region over the past year fleeing war and poverty. Many Dutch people oppose the influx.

Wilders could face up to a year in prison.

The case against Wilders, which follows the acquittal in December of his political ally Marine le Pen in France on similar charges, pits freedom of speech against freedom from discrimination.

Wilders says the trial is politically motivated and his comments are protected by his right to free speech.

With his trademark peroxide blond hair, Wilders sat calmly listening to a day of legal arguments before asking judges to acquit him.

“I didn’t say all Moroccans should leave the country, or all Moroccans are no good, but I spoke about fewer Moroccans because that’s what I want and with me millions of Dutch citizens,” he said, repeating that he wants the border closed to all non-Western migrants.

But he added: “I don’t hate anyone and I don’t spread hate. I reject everything that has to do with discrimination.”

Prosecutors say comments Wilders first made during election campaigning in March 2014 crossed the line of what can and cannot be said under Dutch law.

“Freedom of expression is not absolute, it is paired with obligations and responsibilities,” said lead prosecutor Wouter Bos. “Racism and hatred of foreigners constitute a direct violation of the foundations of freedom, democracy and the rule of law.”

In the televised 2014 incident that led to his prosecution, Wilders asked supporters whether they wanted more or fewer Moroccans, triggering the chant: “Fewer! Fewer! Fewer!”, to which a smiling Wilders responded: “We’ll take care of that.”

Prosecutors said his supporters had been coached before the event, significant for their attempt to show that Wilders had intended to incite hatred. Later, Wilders publicly referred to Moroccans, who make up about 2 percent of the population, as “scum”.

Wilders and his decade-old Freedom Party have become the most popular party in national opinion polls by a wide margin, with elections expected in March 2017.

He has lived under 24-hour protection since the 2004 murder of writer Theo van Gogh, who – like Wilders – made films criticising Islam.

An earlier discrimination case against him in 2011 centred on his calls for “Muslim criminals” to be stripped of their Dutch nationality and deported, and his comparison of the Koran to Hitler’s manifesto “Mein Kampf”.

Judges concluded then that Wilders’ remarks might have been offensive, but acquitted him because the target was a religion, not a race.

Wilders faces one charge of discrimination and a second of inciting hatred of Moroccans. If convicted, he could go to jail or be fined a maximum of 7,400 euros (5,802.5 pounds).