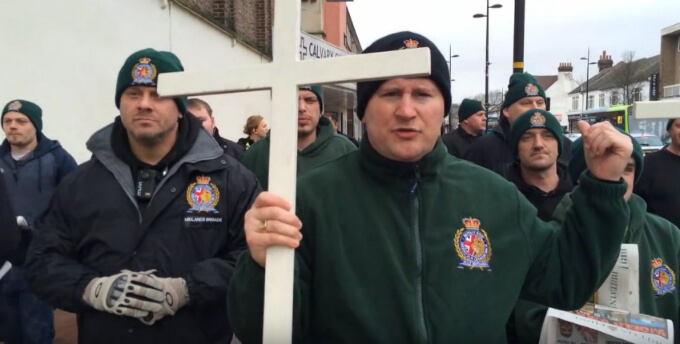 The former leader of Britain First was jailed for breaching a court order banning him from entering mosques or Islamic Centres in England and Wales.

Paul Golding, 34, was served with a court summons by Bedfordshire Police on 2 November  after breaching a High Court injunction granted on August 11.

He will serve half of his eight week sentence.

The three-year banning order had restricted him from entering any mosque in England and Wales “without prior invitation”.

Britain First had uploaded a video to YouTube showing members inside the Al-Manar Islamic Centre in Cathays, Cardiff on 20 August. In the video, party members made allegations of extremism against the mosque. This was denied by a mosque trustee.

The Muslim Council of Wales also dismissed the accusations.

Golding, in an interview with IBTimes, days after the “mosque invasion,” insisted that he had not breached the order. The High Court however, detailed how Golding had driven four party members to the Al-Manar Centre.

James Weston, counsel for the Chief Constable of Bedfordshire Police, said that members of the mosque found the actions of Britain First to be both provocative and unnerving.

Passing sentence, the judge remarked that Golding’s actions were an affront to Muslims nationwide.

Golding handed control of the party to his deputy Jayda Fransen last month. Fransen has faced her own legal difficulties.  She was convicted of wearing a uniform for a political purpose and a religiously aggravated charge in early November.