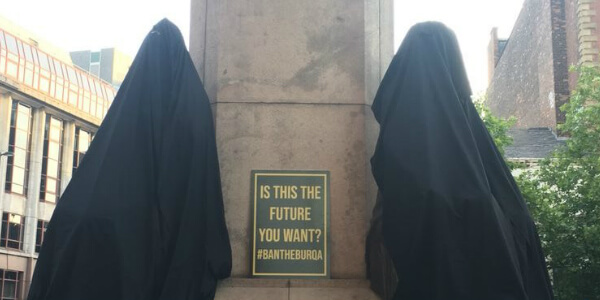 Activists from the far-right identitarian movement Generation Identity covered various female statues in the UK and Ireland over the weekend, calling for a ban on the burqa.

The group covered statues of women with makeshift niqabs in London, Manchester, Bath, Folkestone, Canterbury, Edinburgh, Belfast, and Dublin. Signs which read ‘Is this the future you want?’ were placed on each statue.

Local Muslims condemned the stunt in Belfast, with Naomi Green of the Belfast Islamic Centre arguing that the ‘dangerous stunt’ was proof of their ‘paranoid nonsense’ about Muslims and Islam. She added that the group sought to cause division where none had existed before.

Deprived of a voice on Facebook, Generation Identity continues to use Twitter without much censure, a tweet about its latest stunt gained hundreds of retweets and ‘likes’. 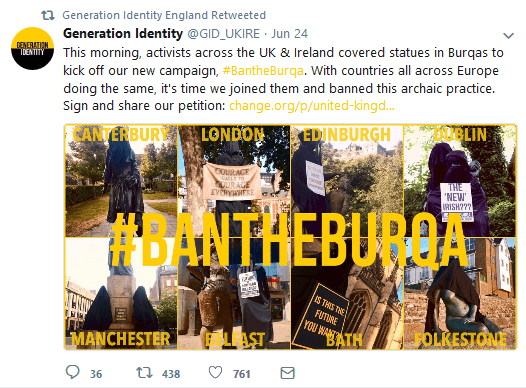 The platform has been slow to respond to criticism and has, in recent months, suspended the accounts of more high-profile users from the far-right.

Facebook confirmed to the i newspaper that it had permanently banned the group, citing its policy on extremist content but Twitter has not taken a similar stance despite the fact that the @GID_England account tweeted last year, “Islam rears it’s ugly head in Barcelona, many innocents injured or dead. Reconquista now more important than ever. #BarcelonaTerrorAttack.”

The Reconquista (reconquest) reflects a dark period of Spanish history, where the crown sought to violently expand its empire by reclaiming parts of the Iberian Peninsula from Muslim hands. This conflict gained religious papacy in the eleventh and twelfth centuries and morphed into a crusade against Islam. As the historian, Joseph Callaghan argues, there was a continuation of ‘territorial aggrandisement’ throughout twelfth-century Spain. Others point out how the ideology of the reconquest united the Iberian Christians against a fragmented Muslim leadership.

The forced expulsion of Jews by the Spanish crown in 1492 was repeated centuries later with the expulsion of 300,000 Moriscos – Muslims who had nominally converted to Christianity after the surrender of Granada in 1492, after more than a century of discrimination and marginalisation which included the banning of the Arabic script by royal decree in 1508. For Dr Elizabeth Drayson, at the University of Cambridge, the completion of the Reconquista had “ended seven centuries in which Christians, Jews and Muslims had, for the most part, lived peacefully and profitably together.”

Some have also questioned the historiography which surrounds the reconquest in Spain. But the radical and far-right are often guilty of creating their own historiography in an effort to reshape public memory by placing certain events in a modern and misleading narrative about Islam and Europe. So, it should come as no surprise that Generation Identity sought to link this historical event and anti-Muslim violence and discrimination to the modern era.

Generation Identity’s use of food banks and stunts aim to occupy a space in a far-right scene where the likes of Tommy Robinson and the leadership of Britain First are in prison. The proscription of National Action (and its affiliates) along with the jailing of its key members for criminal offences has also created a vacuum for neo-Nazi groups like the System Resistance Network to occupy. Ukip, meanwhile, has accepted the membership of individuals linked to the so-called ‘alt-right’ and ‘alt-light’, a marked shift from the outwardly Islamophobic posturing of the party under the leadership of controversial MEP Gerard Batten, who continues to argue that Islam is a ‘death cult’. Some are concerned that the far-right will seek to re-organise around the ‘Free Tommy’ movement

The Home Office has denied entry to four activists from Generation Identity. One member, however, who remains banned from entering the UK, Tore Rasmussen, has now found a base in Dublin, Ireland, according to a report in the Times. On June 12, Rasmussen tweeted, “You can’t make this sh*t up; Inbreeding is now the number one killer of Pakistanis in London.” He used the hashtag ‘#CulturalEnrichment’ to attack multiculturalism. This ironic use of the hashtag is popular among the broader far-right online to chastise multiculturalism and demean marginalised groups as inherently violent or culturally menacing.

An online petition, made by the Generation Identity, makes the racialised and offensive claim, “Eventually, you would be able to mistake some places In the UK for areas of Saudi Arabia or Iran.”

The ideology of Generation Identity is rooted in ethnopluralism. In short, this old idea rejects multiculturalism and instead favours segregation along ethnic and cultural lines through geographic distance, in the belief that mixing of groups will result in cultural extinction – hence their obsession with the ‘great replacement’. This belief is grounded in the construction of various threats to their group identity, which is reliant upon not just the ‘othering’ of Muslims and refugees, but in its rejection of political elites and institutions like the European Union, believing that such entities hinder their ethnopluralist aspirations.

A key aim of ethnopluralism, as argued by other academics, is one of expulsion, which may explain their obsession with a racialised framing of demographics under the hashtag ‘#StopTheGreatReplacement’. Others argue that ideas around ‘ethno-identity’ are replacing traditional concepts of nationalism.

Again, activists claim the group is not opposed to individual Muslims, citing that it remains hostile to the nebulous concept of ‘Islamification’ or ‘Islamisation’. But again, other activists shatter this claim, with some using social media to blame Muslims for child sexual exploitation.

The concerning restrictions on religious freedoms when it concerns the niqab or burqa have expanded to other parts of Europe in recent months. Denmark, Norway, and now the Netherlands now have some form of public ban.

This provocative series of stunts from Generation Identity aims to reframe an ongoing debate, a debate the current government has always rejected, with Theresa May, who said last year: “what a woman wears is a woman’s choice”. And to boost its media profile despite its small base of support. The nature of the co-ordination, however, in this latest series of stunts is concerning.