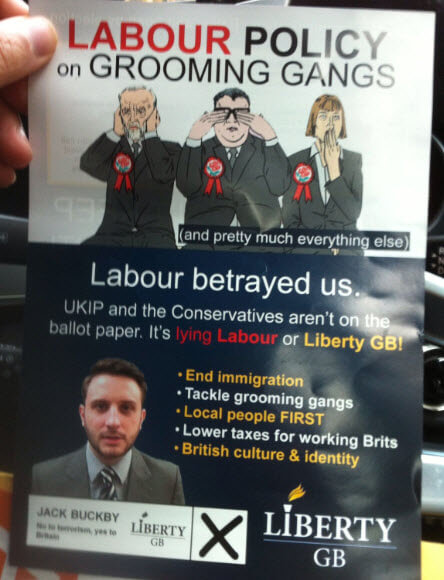 As voters go to the poll at the Batley and Spen by-election, we received notice of the following leaflets being circulated in the area by the far right nationalist group, Liberty GB.

Most major parties have made the decision not to contest this by-election that came about after the brutal murder of Jo Cox MP. However, the far right nationalist group, Liberty GB, put out the following inflammatory leaflet in the constituency and which was sent to us.

Many would think that after the brutal murder of a Member of Parliament on our streets, a far right nationalist party would defer to the national sentiment to reflect and honour the memory of this hard-working Member of Parliament. However, instead of this, they have chosen to contest the election and to do so in a manner which stands directly against the words of the late Jo Cox who stated in her maiden speech that,

“We are far more united than the things that divide us”.

We have highlighted the inflammatory actions of this group before and these can be found here and here.

Liberty GB deserves nothing else but total humiliation at the ballot box to send them a signal that their activities are nothing short of contemptible. If anything else, their actions should energise many of us to peacefully challenge far right and other extremist groups where we find them.