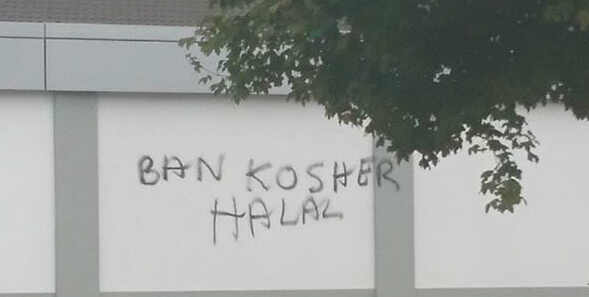 An obscure far-right group has claimed responsibility after graffiti which called for the banning of halal and kosher meat appeared on the outer walls of a Lidl store in the Worcester area over the weekend.

Other graffiti on the store exterior included a call to ‘ban’ Islam which was signed off with ‘BRPI’ – the initialism for the British Renaissance Policy Institute. 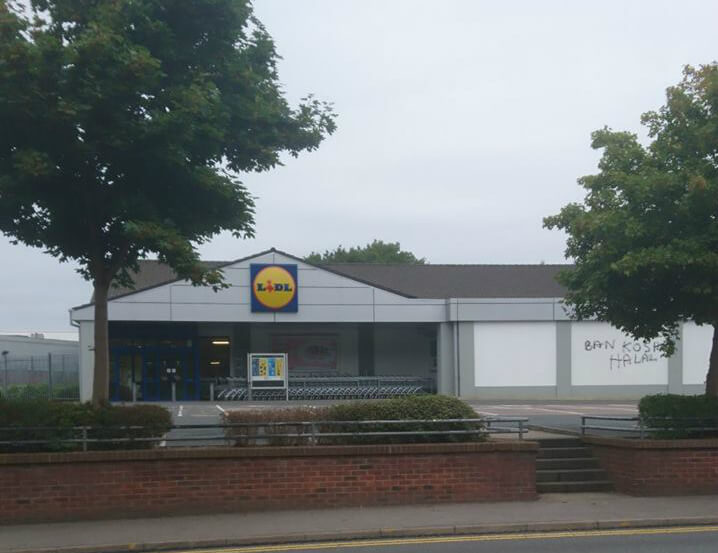 The BRPI was founded by the disgraced former UKIP parliamentary candidate Jack Sen in 2014, who then joined the racist, neo-fascist British National Party (BNP) in 2015, before leaving the party several months later. He published a book that year which featured chapters lifted from the notorious neo-Nazi hate site the Daily Stormer, along with a guest chapter from another notorious American neo-Nazi, Matthew Heimbach.

Mr Sen also helped to found British Resistance Party (BRP), which had, for a brief time, sat under the leadership of the Liverpool-based solicitor Joe Chiffers. Mr Chiffers was a parliamentary candidate for UKIP in Liverpool Riverside, gaining 2,500 votes in the 2015 General Election. He also served as chairmen for the BRPI.

Jack Sen also appeared on a Channel 4 documentary about the far-right earlier this year.

A failed Worcester City Council candidate and local organiser for the BNP, Carl Mason, was brought into the BRPI in 2014, and Mason also engaged with the BRP, according to local press in Worcester.

At 13:25 GMT on August 25, Mr Sen shared a post from the official BRPI page to a closed Facebook group called ‘British Politics’ about the graffiti, adding that “LIDL “TOLD” NOT TO SELL HALAL OR KOSHER BY OUR INDEPENDENT ACTIVISTS”. 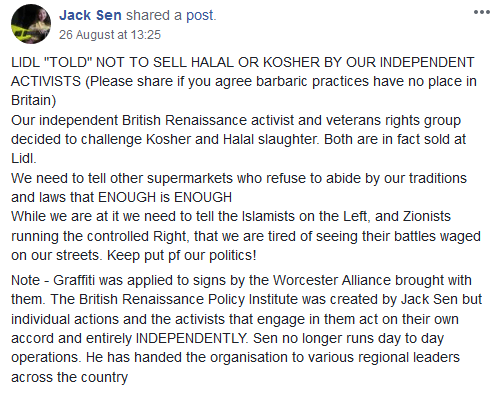 Mr Sen also claimed that Lidl continues to stock halal and kosher meats, which is not true, as the official Twitter account @LidlUK has confirmed on multiple occasions that it does not stock these meats.

Hi, thanks for getting in touch. We do not stock Halal / Kosher certified meat or poultry. Thanks

In July 2016, Lidl confirmed that its meats do not comply with strict halal standards, so, it would, therefore, be ‘misleading’ to label the products as such, since “all processes, production and transport must be regulated throughout the process” to be deemed halal-certified.

The statement from the BRPI ended that Mr Sen had nothing to do with him, as he longer occupies the leadership of the group, and the graffiti was carried out by members acting on their own volition.

Nor is this the first time that individuals linked to the BRPI have carried out Islamophobic stunts. Last year, re-appropriated BNP posters about ‘grooming gangs’ were distributed in Worcester. Other local BRPI activists in the Worcester area have worked with members of extreme far-right groups like the National Front.

Many users in the group condemned Sen’s post, adding, for example, that “If you were genuinely concerned about animal welfare you’d be calling on them to stop selling any meat.”