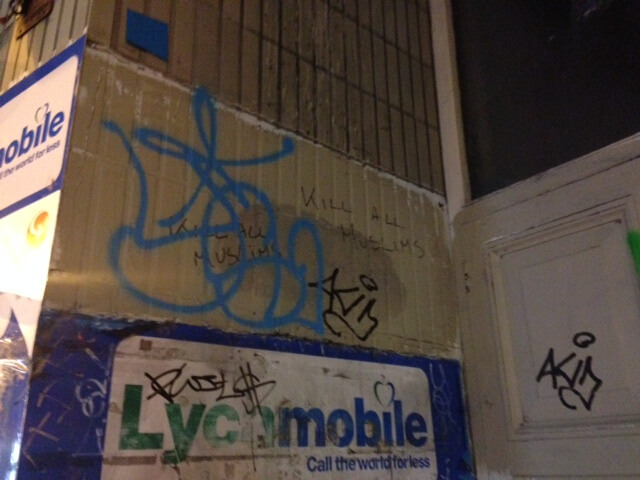 This anti-Muslim graffiti was reported into us by a woman who happened to walk past the highly offensive material in Peckham in the London Borough of Southwark. The material was present on Peckham High Street and slightly off the side of a store which meant that it was visible to shoppers as they walked past it.

Her actions involved reporting the anti-Muslim graffiti into us and into Southwark Council. As a woman who is not a Muslim, it highlights the simple fact that many people genuinely detest hatred, intolerance and threats against communities and her example is one that should make us proud of our fellow citizens.

So many non-Muslim fellow citizens have stepped forward and have assisted in gathering information on far right groups and some have become the most ardent campaigners against anti-Muslim hatred.  We must not forget this fact and that whilst things may seem depressing at times, there are many, many good people who genuinely care out there.

We value the unique nature of what we believe is inherently British. That is, to stand up against those who seek to divide and to stand together against those who target communities. There is much good in this island of ours and we should celebrate this.