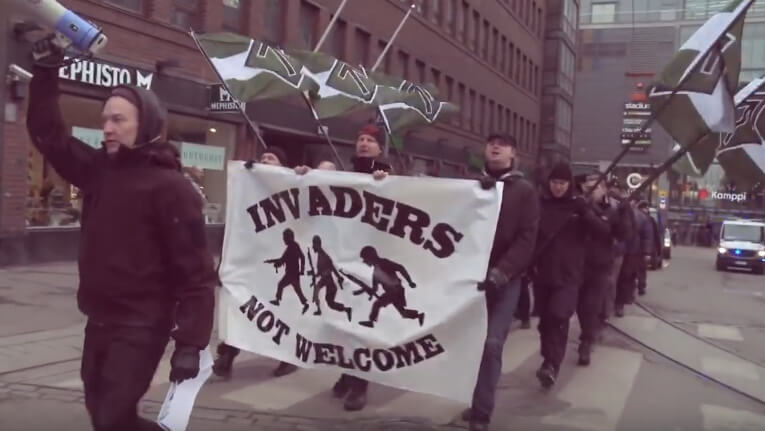 Finland may outlaw neo-Nazi groups after an assault at a far-right protest resulted in a man’s death.

Police Commissioner Seppo Kolehmainen will raise the prospect of a ban with the prosecutor general’s office, according to Yle news. But days earlier, Kolehmainen had acknowleged that any ban could prove problematic as members could act independently.

The suspect Jesse Torniainen, born in 1990, has been detained for probable cause of assault and grossly negligent homicide.

Torniainen is a founding member of the neo-Nazi group Suomen Vastarintaliike SVL (Finnish Resistance Movement), according to police.

The SVL had protested outside Helsinki Railway Station on September 10, 2016. Jimi Karttunen, 28, had walked past the protest and noticed their neo-Nazi flags. According to his father, Jimi approached them to ‘challenge their ideology’. Police confirmed the Jimi had spat in the direction of the neo-Nazis. Words were exchanged, and Jimi continued walking towards the train station.

Moments later, a member of the SVL, allegedly Jesse Torniainen, ran after Jimi and kicked him in the chest, causing him to fall backwards onto the concrete. Jimi needed stitches in the back of his head following the assault. He developed a cerebral hemorrhage and died several days later.

Some have speculated that this incident was preventable. Police in Helsinki later confirmed that the notice to protest on September 9. The original notification made no reference to the real intention of the protest. Nor did it reference the SVL. So for police, it became a question of resources in a city where multiple protests occurred on September 10.

Jimi’s death shocked the nation. A small vigil outside Helsinki Central Station attracted dozens of wellwishers. Someone had written ‘Stop the Hate’ in yellow chalk near the vigil.

Yet, Finland’s Security Intelligence Service, Supo, do not consider right-wing extremism a threat to national security.

The Helsinki Times reported that Jesse Torniainen has a history of violence. He may face further charges for his alleged involvement in a violent far-right protest and two assaults in 2015.

Nor does the influence of the SVL exist in a vacuum. Mika Ranta, a member of the SVL, went on to form the Soldiers of Odin. Ranta, however, denies any link between the groups.

The SVL seeks to unite Nordic and Baltic states under the banner of national socialism. A former leader of the movement claimed the SVL has between 60-70 active members. It sounds small but it has grown in recent years. Like other extreme far-right groups, the movement is not just ideological. It seeks to create a subculture and sense of group identity. This includes martial arts training and presentation evenings.