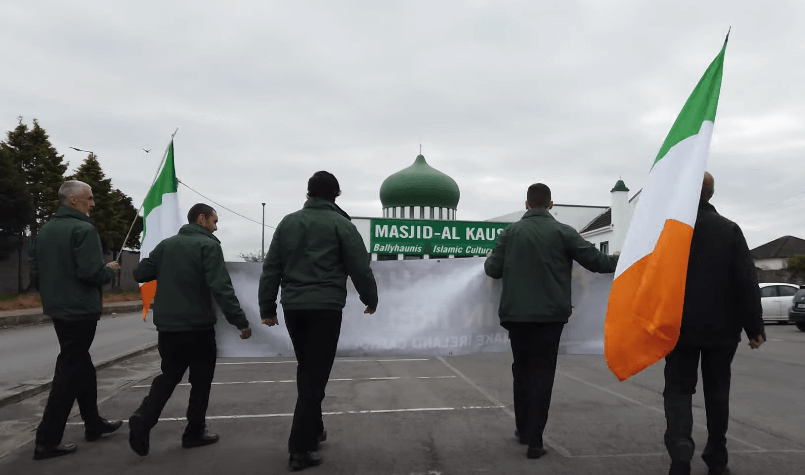 Gardaí (Irish police) are investigating after a far-right group holding a banner targeted Ballyhaunis Mosque on October 20, after a member of the public alerted the police, Tell MAMA can reveal.

The group responsible, Siol na hÉireann, is based in Donegal under the leadership of Niall McConnell, which, as revealed in an extensive investigation in the Irish Times, is not a political party but a private, for-profit business.

The so-called “anti-Sharia Law” protest appeared across their social media platforms, with over 5,000 views on YouTube. Throughout the video, worshippers are filmed in the background exiting the mosque. Similar agitations targeted local butchers with conspiratorial claims about halal meat in Ireland.

Ballyhaunis has been described as one of the most diverse towns in Ireland.

A failed politician, having gained just 580 votes in April, Niall McConnell was called a racist in graffiti which appeared in Derry’s Creggan Estate, as the local press reported on his homophobic comments about Taoiseach (Prime Minister) Leo Varadkar.

McConnell uses social media to host discussions with neo-fascists from across Europe, including the Noua Dreapta (New Right) of Romania and the German neo-Nazi NDP party. The thumbnail for the YouTube stream with the leader of the New Right includes multiple flags bearing the white supremacist Celtic Cross symbol (which had been on the party’s previous logo as, in 2015, the Romanian government banned Holocaust denial and the promotion of the fascist Legionnaires’ Movement, the New Right revere its founder Corneliu Codreanu).

Gonzalo Martin Garcia of the far-right Democracia Nacional in Spain has appeared on two live streams with McConnell.

Other guests on his YouTube channel include E. Michael Jones, a notorious antisemitic Catholic author, according to the Anti-Defamation League.

In April, he hosted a webchat with Nick Griffin, former leader of the far-right British National Party (BNP) and Jim Dowson, a notorious far-right activist who founded Britain First and a central pillar in the Christian militant group Knights Templar International, and financial backer of the BNP. Dowson, was, himself, involved in the short-lived, far-right, loyalist group the Protestant Coalition which had also targeted refugees in Nothern Ireland after the controversial flag protests in Belfast years earlier. Dowson was given a suspended sentence in 2015 for participating in loyalist flag protests in Belfast.

McConnell also spoke alongside Griffin in a live stream with the chairman of the Europa Terra Nostra group, Dan Eriksson, “a stalwart of the Swedish Nazi scene,” and the self-identified Italian fascist Roberto Fiore, of Forza Nuova (who sits with Nick Griffin, Gonzalo Martin Garcia and others on the leadership board of the Alliance for Peace and Freedom).

On April 26, McConnell interviewed the independent-listed, but Golden Dawn-affiliated MEP Athanasios Konstantinou. In December 2019, McConnell appeared at an ultranationalist, far-right event hosted in the European Parliament hosted by Konstantinou, featuring notable neo-fascist and neo-Nazi groups, including the Alliance for Peace and Freedom which was titled, “Christianity and the Shaping of Europe,” demonstrating how these connections were not just online.

The event logo (L) appears on the screen below Niall McConnell’s speech, and on the right (R), is the image used to promote the event in the EU Parliament on December 11, 2019.

McConnell gave a speech in the session which included inflammatory statements like “war to the death, on top with, the jihadi Islamists the Zionist elites have imported into our cities and towns”.

Siol na hÉireann made headlines for harassing Fr Stephen Farragher in a viral video in August, accusing the priest of ‘heresy’ for involving two Muslim men in the final blessings of Mass on April 3, at St Patrick’s Church in Ballyhaunis.

The video, which gained over 42,000 views on YouTube, included anti-Muslim and Islamophobic statements from Niall McConnell, who called the Muslim men “foreign, satanic cultists”. In response, Fr Farragher told the far-right protesters: “Everyone who acts with integrity and justice is welcome at the mountain of the Lord.”

Siol na hÉireann’s use of online petition also targeted the historic use of Croke Park for an interfaith Eid socially-distanced Eid celebration, gaining thousands of signatures.

The group has attached itself to broader anti-mask protests in Dublin and with older and vulnerable communities shielding or self-isolating during the Covid-19 pandemic, the group uses its branding and propaganda under the auspices of “Irish food aid”. In some examples, stalls related to this food aid include members distributing their far-right newspaper.

Some within the yellow vest movement have since distanced themselves from McConnell’s movement.

As part of its investigation, Tell MAMA has also flagged, where appropiate, the content of concern with social media platforms.