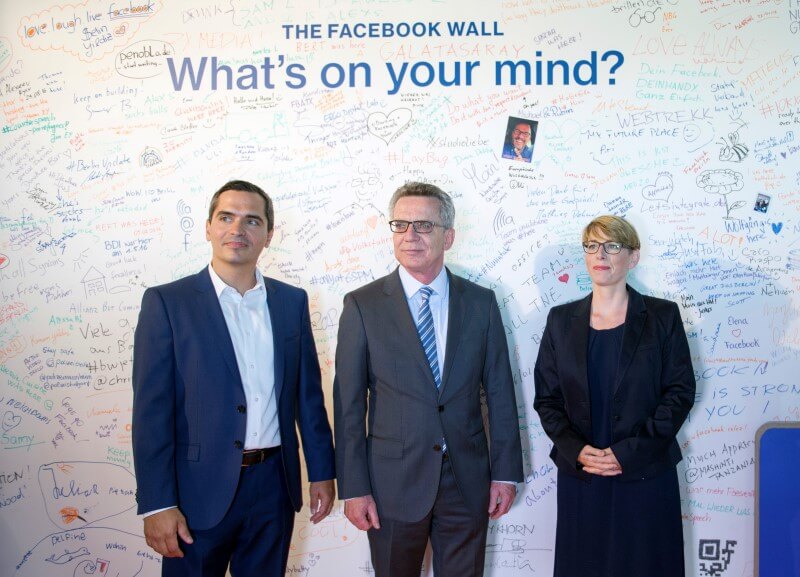 Germany’s interior minister visited Facebook’s offices in Berlin on Monday and said it should be more proactive in removing forbidden content from its social network platform.

“Facebook should take down racist content or calls for violence from its pages on its own initiative even if it hasn’t yet received a complaint,” Thomas de Maiziere said.

The German government has been critical of Facebook in the past. Political leaders and regulators have complained the world’s largest social network, with 1.6 billion monthly users, had been slow to respond to hate speech and anti-immigrant messages.

Last year Justice Minister Heiko Maas told Reuters that Facebook must abide by stricter German laws banning racist sentiment even if it might be allowed in the United States under freedom of speech.

De Maiziere said he recognized Facebook’s efforts to develop software that can better identify outlawed content and praised its efforts to fight child pornography. He said it was right to warn users in its terms against the dissemination of illegal content.

Eva-Maria Kirschsieper, Facebook’s head of Public Policy in Germany, told reporters during de Maiziere’s visit that the discussions between political leaders and companies in social media would continue.

“We see ourselves as part of German society and part of the German economy,” she said. “And we know that we have a major responsibility and we want to live up to this responsibility. We take this issue very seriously indeed.”

Mark Wallace, a former U.S. ambassador to the United Nations who now heads the Counter Extremist Project (CEP) in New York, a non-profit group that maintains a database of information about extremist groups, said Facebook was a leader in the social media sector in combating extremism, but more work was needed.

“Of all the companies, Facebook has done the most, but they’re all just starting to recognize that the weaponization of social media platforms is not good business and not good for society,” Wallace told Reuters.

CEP is completing testing of a new software tool that will identify new images and videos published on social media sites by Islamic State and other extremist groups, and remove them instantly wherever they occur, much as already done with child pornography images.

Earlier this year, Facebook Chief Executive Mark Zuckerberg came to Berlin to respond to the criticism. He said he had learned from Facebook’s experience in Germany that migrants were a group of people who also needed to be protected from hate speech online.