Hanging, Give us Your Money & Sadiq Khan – A Cacophony of Hate From Britain First 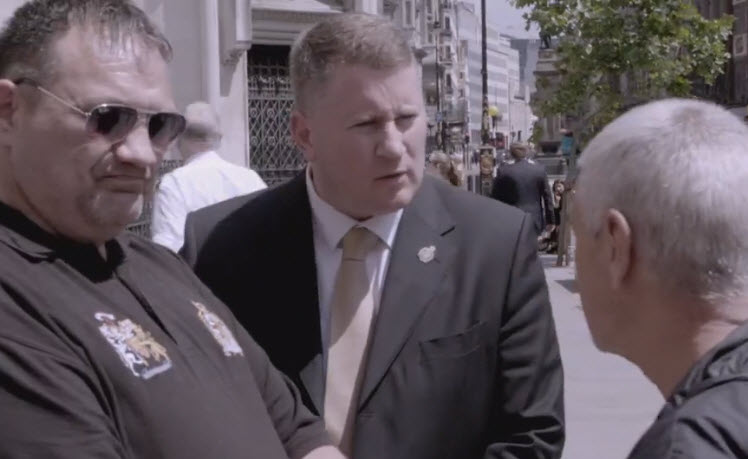 After the public hammering that Britain First took in the last week on the BBC documentary entitled, “We Want Our Country Back“, this far right extremist group has gone back to its victim mentality comfort blanket, blaming the whole world for the ills and the ‘conspiracies’ that supposedly range against it.

Their latest begging bowl of a mailshot shows how extreme the rhetoric of this extremist group is becoming. “Traitors” who “give away our homes, jobs and heritage,” will according to them, find “good old fashioned British justice at the end of a rope.”

The mailshot then goes onto suggest that Britain First is a “Declaration of War against the establishment.” They go onto state that they are, “poised for battle“, with their tin pot saucepans on their heads.

And just to complete the fact that Britain First base their policies on race, this statement sums it up: “Each Mayoral candidate is entitled to a two-page spread in a booklet that is delivered to 10 million people in London, 45% of which are still ethnically British.” Britain First reverts back to the ‘lineage’ fascist ideology, much vaunted by the Nazis in Europe.

Not to be outdone in the smear stakes, the mailshot then turns its fire on Sadiq Khan,  the Labour Party’s candidate, with the following statement, “Labour has chosen a career politician Muslim with strong sympathies for his fellow radicals and extremists – Sadiq Khan.” The link – well you have to stretch it quite a great deal. By advocating for the release of Babar Ahmad and representing a constituents family, Sadiq Khan is now supposedly an Islamist sympathiser. There is truly no level that this group will not stoop down to.

And finally, at the end of this rabble rousing ode to Goebbels, what do Britain ask for? Your time? Your efforts – oh no, that will not do. You can guess what they ask for. A whopping £30,000, all accounted and costed for as though it was done on the back of a fag packet. If they aim to govern London, we think that all Londoners should give them a short sharp shock and put any of their literature where it belongs – in the recycle bin.