NPCC hate crime lead Assistant Chief Constable Mark Hamilton said: “Reporting from police forces show that levels of hate crime peaked in the wake of the attacks but quickly subsided within a few days. This is in line with trends we have seen before, though obviously still a real concern for the police service and wider society.”

Current estimates show that race or faith hate crime compromised the ‘vast majority’ of the increase in reports. Further breakdowns, however, will be available in official Home Office data.

The NPCC stressed that hate crime often increases during weekends and in the summer. Increased visibility of police on the streets and confidence from members of the public to report hate crime may help explain the rise.

In the week after each attack, hate crime reports were still higher compared to the same period in 2016. Reports increased by 12 per cent after Westminster, 50 per cent after Manchester, and 34 per cent after London Bridge.

Further still, there was a 34 per cent rise in reports in the fortnight after Westminster, with similar rises continuing into the third week, but dropping following the London Bridge and Finsbury Park terror attacks, when compared to 2016 data.

Concerning anti-Muslim hate crime, however, Greater Manchester Police did see a 505 per cent rise in the month after the Manchester Arena attack, compared to the same period last year.

Provisional figures released by the mayor’s office in London had shown a ‘sharp’ rise in racist and anti-Muslim hate crime. 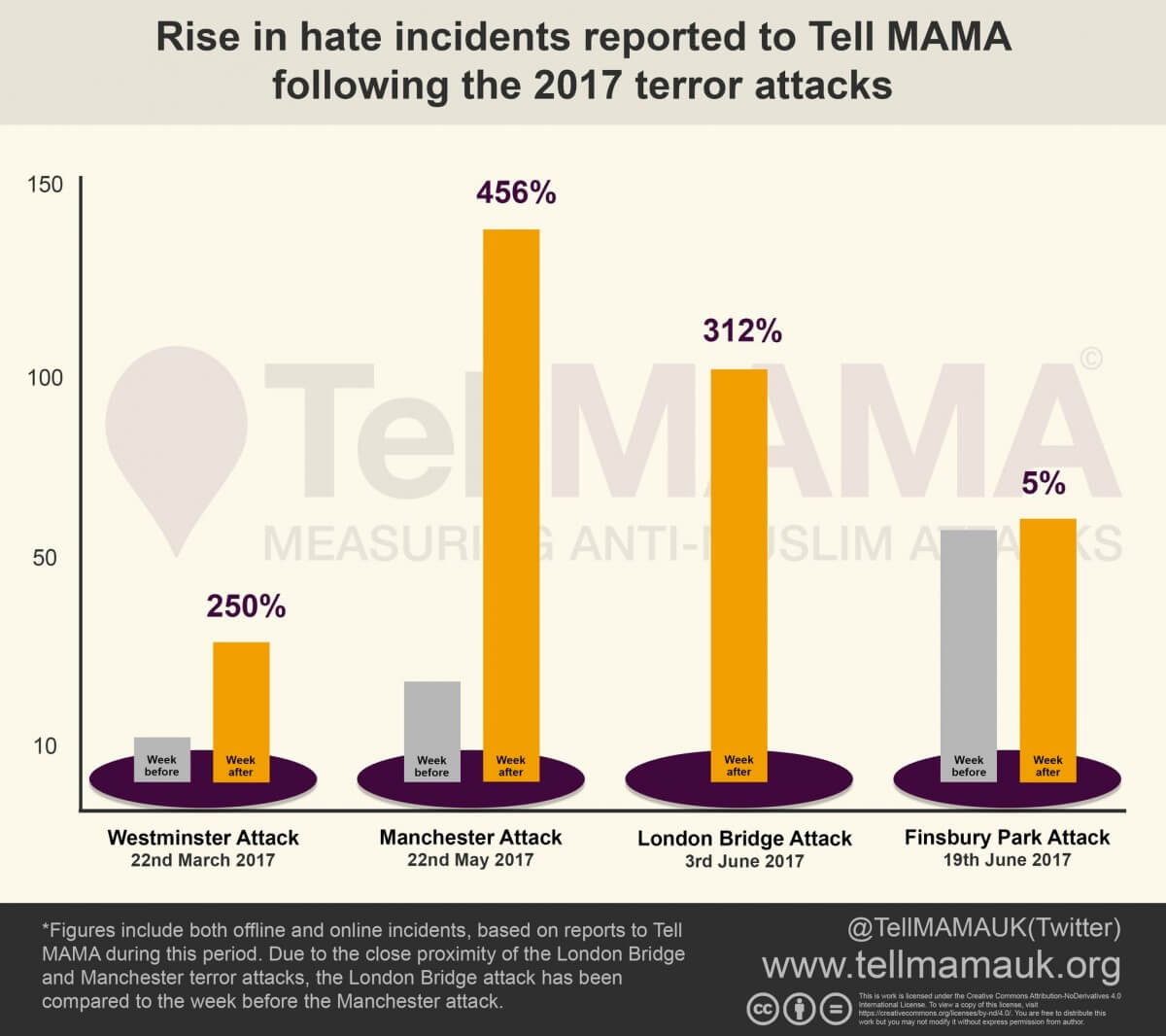 ACC Mark Hamilton added: “As terrorists seek to divide us, it is more important than ever that we continue to stand united in the face of hostility and hatred. Police forces remain committed to helping all people feel safe and secure as they go about their daily lives. More officers have been deployed on visible patrols and forces continue to reach out to all communities to provide reassurance, strengthen our bonds and deal with tensions that may have been triggered.

“Across the country, we have seen people and communities reject these hateful divisions by defiantly celebrating our shared values and diversity and showing we will not be intimidated by an intolerant minority.”

Hate crime can be reported through 999 in an emergency, by dialling 101 in a non-emergency, directly at a police station, through the MOPAC Hate Crime app.