New Home Office data reveals that hate crime in England and Wales have increased by 23 per cent.

The bulletin acknowledges a ‘genuine’ rise in hate crimes following the EU referendum and the terrorist attacks in the first half of 2017.

The monthly racially and religiously aggravated offences recorded by police forces peaked at 6,000 in June 2017, following a sustained spike since the Westminster Bridge terror attack on March 22. Hate crime continued to rise after the terror attacks in Manchester, London, and Finsbury Park. 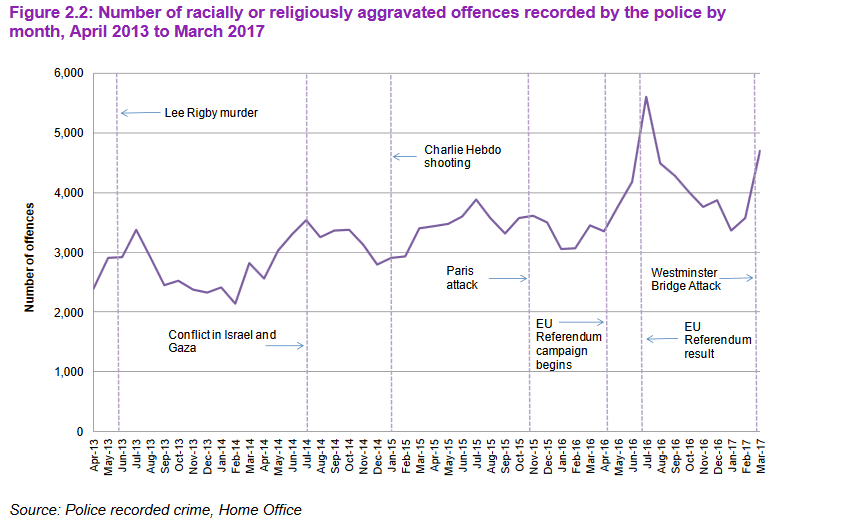 This peak in provisional police data from 38 forces is larger than the peak monthly figure of 5,500 hate crimes after the EU referendum.

Crucially, the Home Office report highlights how non-aggravated equivalent offences did not follow a similar trend, suggesting that the spikes in aggravated offences following the EU referendum and recent terror attacks are indeed genuine.

As with previous data, hate crimes are a disproportionate issue of public order offences and violence against the person, with 89 per cent of incidents in 2016/17 falling into such categorisation.

This latest Home Office bulletin confirms what we previously knew about hate crime following the EU referendum – with offences being 44 per cent higher than the same period in the previous year.

This bulletin does support the National Police Chiefs Council (NPCC) data published in August, which did show a clear spike hate crimes following the recent terror attacks, but it did add several important caveats, including that the EU referendum result had shifted the baseline statistics, and how the summer months do typically see a rise in hate crime incidents.

In broad terms, race hate was the most commonly recorded hate crime strand. Religious hate crime, however, was the third or fourth highest recorded strand, after sexuality or disability hate crime in 41 forces in England and Wales.

The bulletin shows a rise in all five of the centrally monitored hate crime strands, which factors in improved policing, and the correct flagging of such crimes.

In the year ending March 2017, two per cent of all hate crime offences included an online element, a pattern consistent with non-aggravated crimes. An online element offence occurs when it’s believed that an offence was committed, in full or in part, from an electronic device.

Of that two per cent, race hate remains the largest single category (63 per cent) but makes up 79 per cent of the total hate crime. In contrast, 19 per cent of online hate crime concerns sexual orientation, in data provided by 23 police forces. Hate crimes under this category were overwhelmingly harassment offences.

Despite the rise in hate crime, there remains a concern that prosecutions are dropping, but also an acknowledgment that courts do give tougher sentences for hate crime.