Hate crimes up 10 per cent across England and Wales

The latest Home Office data has revealed a 10 per cent rise in hate crime in England and Wales.

Just under half of all religiously motivated hate crimes (47 per cent) were targeted towards Muslims (3,530 offences), up by almost one fifth on the previous year.

The number of reported hate crimes to police forces in England and Wales has more than doubled since 2013. 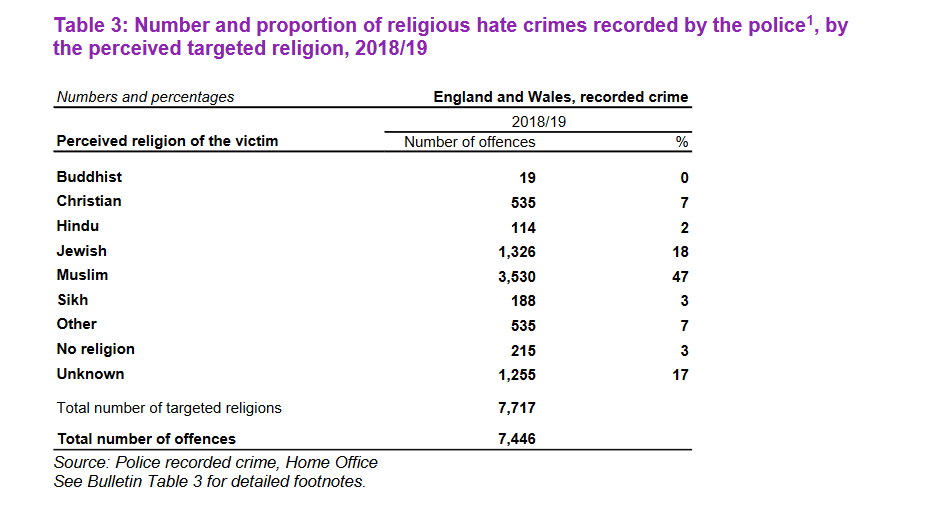 Antisemitic hate crimes had increased by 97.32 per cent from the previous figure of 672 offences as only 0.5 per cent of people in England and Wales self-identify as Jewish.

Just under five per cent of people in England and Wales self-identify as Muslim, which again raises fundamental, pressing questions about the disproportionate impact religiously aggravated hate crime has on both communities given their small sizes.

In 17 per cent of cases, the targeted religion was unknown, as hate crimes towards Christians and other faith groups account for 7 per cent of offences respectively.

Hate crimes targeting Sikhs (3 per cent), Hindus (2 per cent), and those of no belief (3 per cent) account for the rest of the data available.

Hate crime works on the perception of those impacted. And, in operational guidance published by the College of Policing, does not work on hierarchies, as, “A crime motivated by hostility to an atheist is a religious hate crime as are sectarian crimes within different sections of the same religion”.

Consistent with previous years, hate crime remains an issue of public order (54 per cent) and violence against the person (36 per cent).

Racially and religiously aggravated offences rose by 9 per cent in March 2019 (with 5,167 offences recorded in March this year). Racialisation harms Muslims and other faith groups wrongly targeted.

There was a sharp rise in anti-Muslim and Islamophobic hate crimes following the Christchurch terror attacks in New Zealand which left 51 Muslims dead.

The Home Office report, however, stresses that a rise in reports owes to the manner of data collection (data works on a financial year basis).

Racist hate crimes rose by 11 per cent on the previous year (up 7,727 to 78,991 offences) and were the most commonly recorded hate crime strand across 44 police forces in England and Wales.

Factors cited by the Home Office for the increase is a growing awareness of hate crime and improvements in how police forces record such offences.

But the report again acknowledges genuine, tangible short-term rises in hate crime reports that followed ‘trigger events’ like the EU referendum result and the terrorist attacks in 2017.

Hate crimes, across all strands, however, are vastly underreported.

In response, National Hate Crime Awareness Week, held each year between October 12 and October 16, brings together police forces, third-parties like Tell MAMA (and others), experts, and practitioners, to raise awareness about how communities can report incidents and raise awareness about all forms of hate crime.

What is a hate crime? This free guide will answer that question and more.

Don't tolerate intolerance, racism, or bigotry in any form. There are many ways to get the support you need.

To learn more, follow and engage with the hashtags ‘#NHCAW’ ‘#NationalHCAW’, ‘#No2h8’ and ‘#NoPlaceForHate’.

Tell MAMA will be doing other events next month during #No2h8November to raise awareness about anti-Muslim prejudice, discrimination, and Islamophobia.