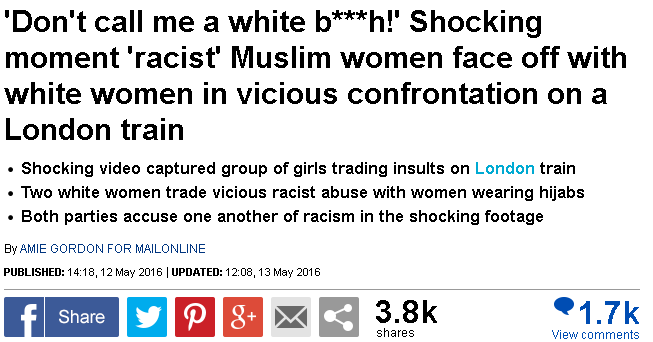 A recent story published by MailOnline and The Sun reposted an argument between TfL passengers from December 14, 2014.

The respective headlines gave weight to the ‘You white sl*g!’ and ‘Don’t call me a white b***h!’ comments. We are then informed that ‘Two white women and two women wearing hijabs fired insults at each other while a horrified onlooker filmed the whole thing’. And ‘Shocking moment ‘racist’ Muslim women face off with white women in vicious confrontation on a London train’.

Both journalists make efforts to transcribe the argument, its insults and abuses. Yet the MailOnline copy makes little effort to highlight the abusive comments directed at the Muslim women. It acknowledges that they experience a ‘torrent of racist and Islamophobic abuse’; but does little to provide readers with statements until the end of the article.

Missing from the MailOnline copy are these statements:

“I don’t care if that’s your family or not or one of yous (sic), I don’t give a s**t she’s sitting there with her headscarf on being racist.”

“She’s sitting there with a headscarf on like I’m going to be threatened.”

The MailOnline copy did acknowledge that the video surfaced in December 2014; but you’d need to read further down the article to learn this fact. The Sun, however, made the odd claim that  ‘an eyewitness filmed the altercation in March but the footage has only just surfaced online’. This may owe to the fact the article appeared a day after the MailOnline version appeared online.

In a heated and unpleasant argument where neither side comes across well, the context of what triggered the argument eludes both articles. That context does appear in the original video description.

YouTube user Jo Hip wrote that the argument had started ten minutes before they hit record. According to Jo Hip, “it all started when the white girl noticed the somalian girls steering at her and making comments under their breaths, after a while the white girl asked them, ‘Why do you keep on looking at me?. The Somalian girls responded by saying, ‘We’re free to look at whoever we want'”.

The description then adds:”After a while the white girl said ‘ I’ve dealt with many people like you and I won’t be intimidated’. When the Somalian girls heard the White girl say ‘People like you’, they assumed she was talking about their religion or race, they then said’ What do you mean people like us? Somalian? Muslim?? Well you’re nothing but a ‘White Slag’.”

Only after hearing the utterance of ‘white slag’ did the video record. The justification for filming was “to show the ignorance of people. Ignorance knows no colour or religion.”

This distorted framing of the article perhaps influenced some the comments from MailOnline readers. It reflected their own anxieties towards multiculturalism. Others recycled myths that the police would favour the Muslim women. It also captured their pessimism and fatalism. Soon it became clear that the comments focused less on the content and more on their own broader concerns and biases.

A bigger question, however, remains: why was a video uploaded in December 2014 reposted in 2016?