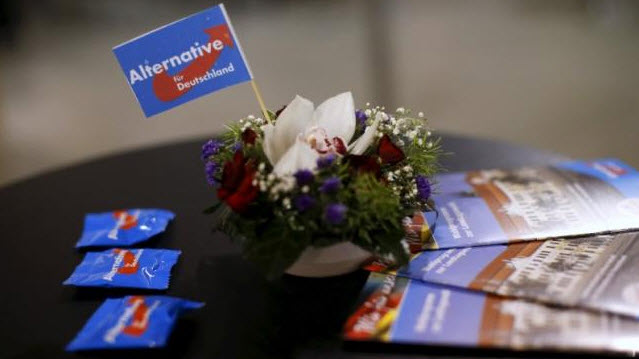 The anti-immigration Alternative for Germany (AfD) said on Sunday Islam is not compatible with the German constitution and vowed to press for bans on minarets and burqas at its party congress in two weeks’ time.

The AfD punished Chancellor Angela Merkel’s conservative Christian Democrats in three regional elections last month, profiting from popular angst about how Germany can cope with an influx of migrants, over a million of whom arrived last year.

“Islam is in itself a political ideology that is not compatible with the constitution,” AfD deputy leader Beatrix von Storch told the Frankfurter Allgemeine Sonntagszeitung.

“We are in favour of a ban on minarets, on muezzins and a ban on full veils,” added Storch, who is a member of the European Parliament.

Merkel’s conservatives have also called for an effective ban on the burqa, saying the full body covering worn by some Muslim women should not be worn in public. But they have not said Islam is incompatible with Germany’s constitution.

The AfD’s rise, which has coincided with strong gains by other European anti-immigrant parties including the National Front in France, has punctured the centrist consensus around which the mainstream parties have formed alliances in Germany.

Last month, the party grabbed 24 percent of the vote in the state of Saxony-Anhalt, surpassing even the Social Democrats (SPD), Merkel’s coalition partner in Berlin. The AfD, founded in 2013, also performed strongly in two other states.

The party’s rise has been controversial. Vice Chancellor Sigmar Gabriel, a Social Democrat, has said Germany’s far-right, led by the AfD party, is using language similar to that of Hitler’s Nazis.

Such accusations have not swayed the party from its anti-immigration course.

“Islam is not a religion like Catholic or Protestant Christianity, but rather intellectually always associated with the takeover of the state,” said Alexander Gauland, who leads the AfD in Brandenburg.

“That is why the Islamisation of Germany is a danger,” he told the Frankfurter Allgemeine Sonntagszeitung.