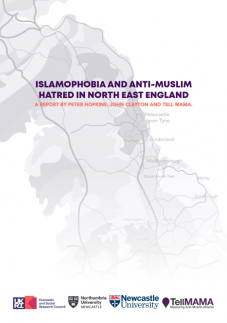 Active steps are needed to retain and build on strong community links forged during lockdown, such as highlighting Muslim communities in a positive way.

Researchers at Newcastle University say the community spirit shown during the Coronavirus crisis could provide a foundation for greater understanding and improved relations between different groups. One example of this, they say, should be a better understanding of the contribution that the Muslim community makes to British society – and this in turn could help tackle Islamophobia.

They point to a report ‘Islamophobia and anti-Muslim hatred in North East England’, published today following research carried out with Muslims across the North East, that highlights the extent and character of Islamophobia across the region and the impact it has on Muslim communities.

Among the recommendations made in the report is the need for improved education about Muslims and Islam, including more community projects to build bridges between groups. Public campaigns against Islamophobia and more funding for interfaith work, to improve the understanding about the Muslim community, the report team say, could also help challenge assumptions and misunderstandings.

Professor Peter Hopkins, Professor of Social Geography at Newcastle University, is one of the report’s authors and is also one of the country’s leading experts on understanding the effects of Islamophobia and anti-Muslim hatred.

He said: “The way that people have come together during the lockdown is proof that communities can put their differences to one side and focus on the greater good. But this shouldn’t just be for the duration of the current emergency. Many people are already talking about ways to keep this community spirit going once the lockdown starts to lift, and one way to do this is by building a better understanding of our Muslim neighbours, to counter negative stereotypes and anti-Muslim hatred.”

To produce the report, the report authors collaborated with Tell MAMA (Measuring Anti-Muslim Attacks), a secure and reliable service that allows people to report any form of anti-Muslim hatred.

Chi Onwurah, MP for Newcastle Central said “The launch of this report reminds us, yet again, that racism is a serious everyday issue for residents of the North East. Nearly 70% of participants in this study experience anti-Muslim racism regularly or daily and nearly 75% of Muslims feel that Islamophobia is getting worse. Muslim women are at the sharp end of this, being abused frequently on the street, on public transport and when driving. We must stand in solidarity with those struggling against racism and Islamophobia. We need real change, now”.

The research, by a team at Newcastle University, with colleagues at Northumbria University, showed that more than two thirds of survey respondents across the three police force areas of Cleveland, Durham and Northumbria said Islamophobia is either a regular or everyday occurrence.

Muslims said they most often experienced Islamophobia as verbal abuse, harassment, intimidation or online abuse. This included comments based on incorrect assumptions about someone’s immigration status or literacy ability. It also included damage to buildings and property owned by Muslims.

The research also showed that Islamophobia takes place in a wide range of locations. Most often it was encountered in the street or in public places such as supermarkets or public transport systems. But many said they had also experienced it in the workplace – for example customers, colleagues or managers making assumptions about their language or making derogatory comments, glances or stares.

More than half of those who experienced anti-Muslim hatred  said they did not report it as they felt that little would be done, and some felt there was no-one willing to defend them when they experience Islamophobia in public.

This had the result of Muslims, particularly women, actively avoiding going to certain places. Some had also tried to adjust their clothing to disassociate themselves from religion but had still received abuse due to their race and gender.

The Safer Cities Action Team of Tyne and Wear Citizens have been campaigning for some time on issues of racism and Islamophobia. Taj Khan, a member of the action team said: “I try to understand and ask myself, why is there so much hate and resentment toward me when I have done nothing to any of those people who decide to verbally and physically torment and abuse me?

“I am a woman, a brown woman, a Muslim woman, I suffer misogyny, racial and Islamophobic hate on daily basis. I hate going out to shop because the perpetrators get more sympathy while I as a victim get threatened with security or the police and get forced off the premises.

“This whole experience leaves me feeling upset, hurt and humiliated but worst of all, I am tormented and think to myself ‘my appearance repulse others so much to a point they feel raged for the way I look, dress and the faith I represent’.

“The police need witnesses to prove you have been a victim of hate crime and the offender walks away with a smirk. I feel I need to invest in a body camera or never leave my home alone. Something has to change.”

Dr John Clayton, a Senior Lecturer in Geography at Northumbria University and report co-author added: “Our research presents clear evidence of the worsening everyday reality of Islamophobia for Muslims in the North East of England. It also shows the impact this has on access to services and employment as well as everyday decision making, identity and belonging. This is a clear reminder of the urgency required in tackling this form of racism in all its forms, across all parts of the UK.”

North of Tyne Mayor Jamie Driscoll said: “Muslim communities throughout our region are continuing to be blighted by anti-Muslim racism, and it’s getting worse. Islamophobia is an everyday reality for Muslim men and women, on public transport, in shops, in the workplace. It has a devastating effect on people’s life chances and opportunities. That’s the shocking finding of this new report.

“But the report also gives us hope. It makes excellent recommendations for how we can address this injustice and as mayor I am committed to supporting these. We have just introduced a new Equality and Diversity policy for the North of Tyne and I’m working closely with groups such as Tyne & Wear Citizens and Show Racism the Red Card who are challenging Islamophobia.

“We’re coming through the Covid-19 pandemic and now have a chance to do things differently and the report shows the urgency of this for our Muslim communities. The outpouring of social solidarity and cooperation, including between communities, during Covd19 shows we can change things for the better. Eradicating Islamophobia once and for all will be an essential part of how we build back better.”

Councillor Joyce McCarty, Deputy Leader at Newcastle City Council said: “I am immensely proud that Newcastle is a friendly city that is home to many vibrant, diverse communities. I welcome the findings of this report and its recommendations and thank those who have pulled it together. It is vital that we continue to learn from our communities, share experiences and challenges and improve our understanding of our city and its cultural makeup. Having a better understanding of community contributions to our society will help eliminate misunderstandings, prejudice and social injustice. Newcastle’s community spirit has shone brightly throughout the coronavirus crisis; we must continue to work together as our city recovers and we will embrace every community in our city.

Northumbria Police and Crime Commissioner, Kim McGuinness, said: “Anti-Muslim prejudice should absolutely not be tolerated here in Northumbria, or anywhere for that matter. Sadly, as experiences in this report highlight, there is a small minority who are intolerant of others. However, it’s clear this pandemic has brought society together. Like a virus, hate can spread fast, but so can the positives. We need this kind, consideration of others, that has been so evident here in the North East, to stay and wipe out the spread of ignorance and bigotry. Let’s build on the positives and tackle the causes that wedge divisions and see this time as one of opportunity and hope.”