A racist and Islamophobic letter sent to a south London mosque echoes a similar hate campaign against mosques and Islamic schools in 2013.

The latest campaign features imagery which seeks to defame the Prophet Muhammad and a DVD-R disc with the pornographic title ‘The Finale The P**** Girls of England’.

Tell MAMA has verified at least three different versions of this hateful material.

Variations include handwritten remarks about paedophilia, as others reference sexual acts, or deploy the highly offensive racial slur ‘n—–‘.

The author(s) of each letter uses variations of the spelling Muhammad, which includes Muhammud (misspelt), Mohamed, and Mohammed.

Tell MAMA can confirm that the letters have, so far, targeted schools, mosques, and community groups in the London borough of Redbridge, in south London, and parts of Yorkshire.

The letters use the same single-use first-class stamp and were sorted and processed in Romford, with one such letter, seen by Tell MAMA, was processed at the mail centre in Romford on October 31.

Due to the offensive nature of the materials, we have declined to share the images in full. Nor do we want to encourage copycat crimes.

As with a similar hate mail campaign in September 2013, one of the images also used he phrase ‘Ashraf Al Mursaleen’ – a term of reverence, which means the most honourable of messengers. Given this information was, however, in the public domain, it could, also, be a copycat.

The handwriting in the letters seen by Tell MAMA suggests that this latest campaign has some coordination, or, is from one individual. In the example below, there is a similar gap between the first and second letters, as the letters G and L in ‘girls’ also contain stylistic similarities. 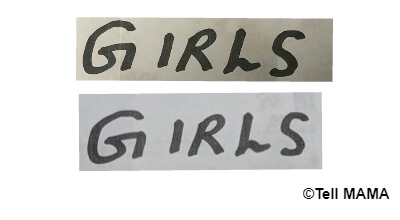 A direct comparison of lettering from sources sent to Tell MAMA.

We are reissuing our safety tips and practical advice for community members.

What to do if you receive hate mail

We are liaising with the relevant police forces on this issue which, again, is being treated with the utmost seriousness.

Our safety tips for individuals and Islamic institutions are free to download.