James Goddard: Far-right protester called for Islam to be banned and for ‘mass repatriation’ 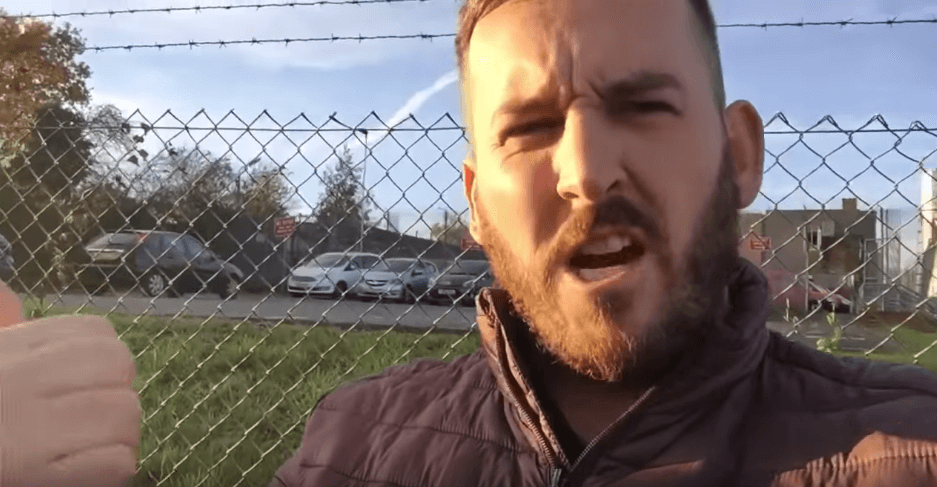 James Goddard, the self-styled ‘yellow jacket’ protester and far-right activist, called for Islam to be banned and for its expulsion from Europe, in several hateful online screeds, a Tell MAMA investigation can reveal.

Goddard’s high-profile harassment of journalist Owen Jones, pro-EU activist Femi Oluwole, and the Conservative MP Anna Soubry has received wide condemnation from politicians across party lines, with the Prime Minister Theresa May condemning the “unacceptable and disgraceful treatment” of Soubry in a cabinet meeting.

Before the Facebook ban, however, Tell MAMA became aware of a post from an account of Mr Goddard, in a public Facebook group called “Jacob Rees-Mogg: Supporters’ Group”. The post, which first appeared on December 31, 2017, linked to a MailOnline article about the use of barriers in London for New Year’s Eve celebration. He wrote that this was “proof that as long as Islam exists in the west, then there will never be peace”, and called for a repatriation program to be institutionalised. He ended the Islamophobic post with the hashtags ‘#BanIslam’ and ‘#DefendEurope’. 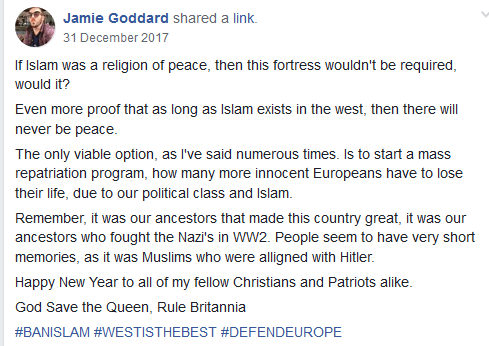 The Facebook username, ‘Brexiter1989’, was used in a GAB account, which has remained accessible but inactive since late 2017. The profile biography reads: “I oppose Islam and everything that it stands for, as long as Islam exists in the West, there will never be peace.”

A post written a month earlier, in November 2017, echoes the Facebook comment but instead, calls for the Qur’an to be banned, adding: “We need to expel Islam from the West ASAP”. Again, Goddard used the ‘#DefendEurope’ hashtag, along with the hashtag ‘#repatriationistheonlysolution’.

A post which read: “P*ki traitors of any stripe, along with your treasonous officials who enable the ethnic cleansing of the native British people” was reposted to Goddard’s GAB profile, to which, he replied: “All illegals need deporting ASAP. It’s about time the indigenous people of Great Britain, were put first.”

Following the murder of an elderly man and the attempted murder of sixteen other pedestrians in Melbourne, Australia, James Goddard attempted to link the attack to Islam, adding that ‘mass repatriation was the only solution’ and ‘Why does our political class, continue to import barbaric, 3rd world savages?’. Saeed Noori, an Australian citizen, who was born in Afghanistan, pleaded guilty in December 2018 but was not charged with any terrorism offences.

In December 2017, Goddard wrote to Jayda Fransen, the then deputy leader of the far-right group Britain First on GAB, “Although I don’t agree with the way you go about things, I have to say you’re effective and brutally honest. As you were, OCS”. The initialism ‘OCS’ is a reference to ‘Onward Christian Soldiers’, rhetoric appropriated by Britain First. Goddard had reposted a comment from the leader of Britain First, Paul Golding when he first joined GAB.

Goddard also wrote that: “Multiculturalism has destroyed Western Europe, unless we start a mass repatriation program, we’ll all be living under the barbaric Sharia Law.” This post gained fourteen positive upvotes and two reposts on GAB.

He called for the East London Mosque to be shut down ‘along with every other Mosque, that currently besmirches our great country.’

His Christmas wishlist for 2017, included the banning of Islam in the West, and the imprisonment of Obama, Hillary Clinton, and the ‘other globalists’, a rhetorical sleight of hand which some have argued is an antisemitic dog whistle.

The Twitter account of James Goddard, which remains active as of writing, again used the term globalist on December 31, 2018.

As with others, the far-right conspiracy-logic of so-called Islamic appeasement by governments in the UK and abroad permeates through much of his social media content. This mistrust of institutions and the pursuit of alternative truths reflects what Michael Barkun argues in a Culture of Conspiracy, is a form of ‘stigmatised’ knowledge. This form of knowledge, Barkun argues, seeks to validate alternative forms of ‘truth’ outside of mainstream institutions, which are considered corrupt or untrustworthy. He has referred to Theresa May as a ‘nasty Islamic appeasing Dhimmi’, which borrows from the conspiracy-logic of ‘Eurabia’.

A racist post on GAB concerned the author and journalist Afua Hirsch, where Goddard wrote, “If you don’t like it, then kindly find the nearest exit and F**K Off, back to Bongo Land”.

He’s also expressed a desire to see the ‘transgenders’, Dianne Abbott, ‘Sadick Khan’, and the Muslim populations of Great Britain and the United States deported to Afghanistan. All groups and individuals he labelled as ‘parasites’.

Other conspiracy theories, of a white nationalist persuasion, have appeared on the personal Twitter account of James Goddard. On August 28, 2018, he tweeted: “Coming from a rat like yourself. Oh please. I speak the truth, like I’ve said many times, we must address the issues in our country. Terrorism, grooming gangs and cultural Marxism. We must tackle these to preserve our country!”. 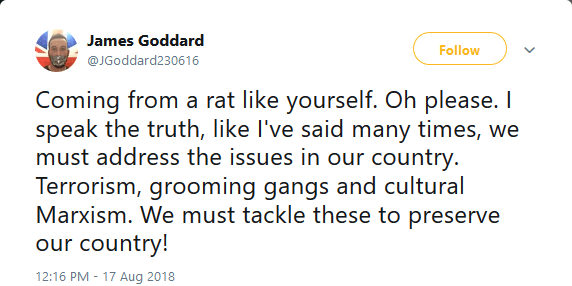 The conspiracy of ‘cultural Marxism’ was coined “by American thinkers, most of them white nationalists, to explain the rise of political correctness and anti-racist beliefs as well as the advent of multiculturalism”. Others have pointed to the antisemitic underpinnings of the theory. This theory appeared was woven into the manifesto of the far-right terrorist Anders Breivik. It was a stalwart of the politics of the neo-fascist British National Party.

Speaker Jon Bercow has called for a change in policing policy, following the harassment of parliamentarians, in what he described as a “form of fascism”.