Katie Hopkins: the viral power of an anti-Muslim falsehood on Twitter 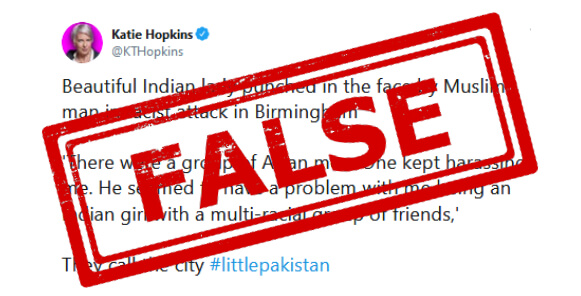 A viral tweet from the far-right commentator Katie Hopkins further demonstrates the need for Twitter to allow users to report content designed to deceive and pass as news.

Hopkins, was, for a brief time, suspended from Twitter for breaching its hateful conduct policies, but the ban was temporary.

The tweet, posted at 9:31 pm on February 23, begins, “Beautiful Indian lady punched in the face by Muslim man in racist attack in Birmingham.” 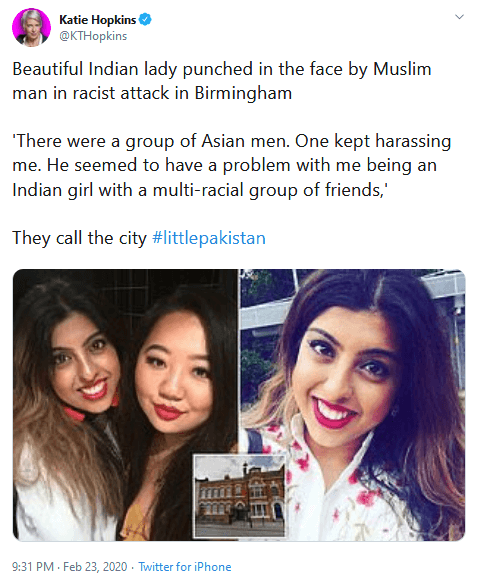 Hopkins then offers a partial unattributed quote from Meera Solanki (the woman assaulted), who described how the man, described as Asian in police reports, approached them during dinner, as he “seemed to have a problem with me being an Indian girl with a multi-racial group of friends”.

Ms Solanki was punched and briefly knocked unconscious after attempting to stop the same man from directing his anti-Chinese racism towards her friend Mandy Huang. This individual had followed the women after they had left the restaurant and made comments towards Ms Huang like “take your f****** Coronavirus and take it back home“ and referred to her as a “dirty c***k”.

Katie Hopkins, of course, provides no evidence to show this perpetrator is Muslim, but her use of the hashtag ‘#LittePakistan’ serves two distinct and revealing functions: it racialises and stereotypes that Muslims in Birmingham are Pakistani (despite 8,681 British-Indians in Birmingham self-identifying as Muslim in the 2011 Census); and, from an ideological position, seeks to foster divisions between Indian and Pakistani communities, given her pro-Modi posturings last year regarding Kashmir. She appeared outside of the United Nations in Geneva with David Vance according to an interview with ANI News last September. Some, however, have questioned the veracity of Hopkins claim of speaking inside of the UN building.

Academics have documented, more broadly, how at around the same time, the European far-right had made solidarity visits to Kashmir, even after foreign journalists and politicians had been denied entry, following the scrapping of Article 370, which stripped the state of Jammu and Kashmir of its relative political autonomy, forcing it to abide by the Indian constitution.

This example of racialising Muslims, functions through the deliberate blurring of Asian and Pakistani communities, despite not all Pakistanis identifying as Muslim. In Birmingham alone, just over 6 per cent of British-Pakistanis self-identified with other religions (as 7,177 chose not to state their religion), including 597 Christians, 441 Sikhs, and 213 Hindus in the 2011 Census. 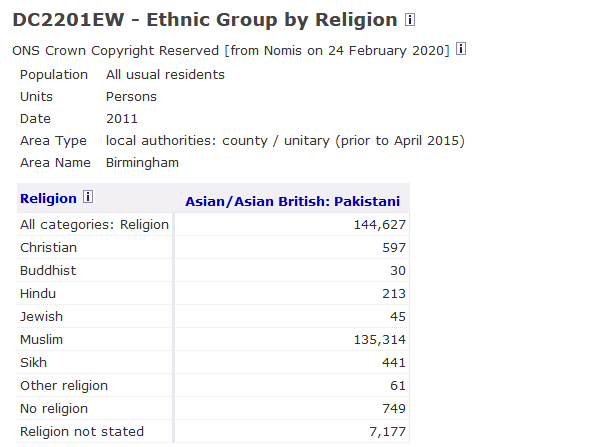 Racialisation, for other academics, concerns the process of identifying and stereotyping groups through cultural identifiers like religion and comes with spatial and geographic significance for discriminated groups. The idea of racialisation also “relies upon asserted inherentisms, and it reinforces cultural hierarchies and privilege.” Others argue that racialisation impacts Muslim men and women in gendered ways, as “Men are more likely to be viewed as if they are disloyal and a threat to national security.” Whereas for Muslim women, they argue, the hijab is ‘othered’ as a cultural oddity or threat, raising questions about national identity and loyalty. Discrimination in housing in education creates the racialisation of geographical space

Other examples of anti-Chinese and anti-East Asian racism following the coronavirus outbreak have included physical acts of violence, racial bullying in schools, discrimination (on public transport and in places of work), and microaggressions where individuals have moved away from them on public transport. Several universities have issued press releases condemning racism against their students.

A spokesperson for the Birmingham Chinese society has stated that abuse has always existed but some were using the virus as a pretext for racial harassment, abuse, and violence.

She explained: “We wear masks to protect others from our coughs and sneezes. Some wear them as protection against pollution. Some women wear them because they don’t want to be seen without make-up. We do it to protect others, not ourselves.”

Anyone with information about this ssault is urged to contact West Midlands Police by quoting the crime reference number 20BW/39330Q/20 if you have information about the assault by calling 101 anytime, or by using their Live Chat function (8 am to midnight).