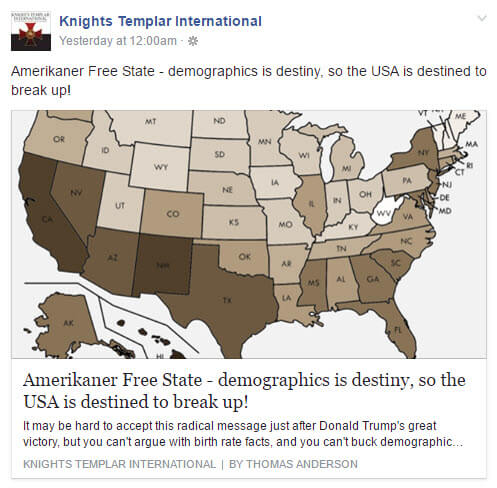 The Knights Templar International Facebook site makes itself out to be a site that cares for the future of Europe whilst evoking images of Crusaders and in whipping up a sense of fear that things are going to get worse in Europe because of migration and migrants. In fact, ever few hours, the Facebook page posts up pictures of armour, Crusader imagery and swords.

A Facebook page that has over 400,000 Facebook likes, including from prominent ex-politicians, it’s ability to draw in anti-Semites through postings about George Soros and his ‘coup plot’ against Trump, can be seen below.

In response to a post from Knights Templar International, entitled, “Wake up! The storm is brewing“, the following sickening full-blown anti-Semitic posts can be seen:

“Pull out $oro$ gold teeth, shave his head. make him do manual labour put him in ditch blow his brains out. Make bars of soap and lampshades.”

Further investigation into the Facebook page shows that the page has been used to fundraise for material and surveillance material which has been sent to ‘Bulgarian volunteers’ supposedly defending their borders against pitiful migrants.The Facebook page no doubt invokes a Europe standing against those ‘invading’ Europe and the play on Crusader imagery and the polarised depictions of Muslims through the lens of extremism alone, provide further evidence of a Facebook page that sees Europe as an ethno and mono-cultural continent that needs ‘defending’.

How the surveillance material has been used and whether it has been used against migrants, we will not know, yet with a UK phone number for the Knights Templar International Facebook page, we are sure that the Government’s Extremism Analysis Unit would like to know more about this group and its activities within Europe.

Just when you thought that the Facebook page might not revert to race, it goes ahead and does that. On one of the posts, the term ‘Afrikaner’ emblazons a headline and demographics are brought into the discussion with the following title:

“Amerikaner Free State – demographics is destiny, so the USA is destined to break up!”

So, just in case you see an advertisement come by which plays to imagery of the Crusades and which suggests that Europe is under threat, there is a chance that it could be the Knights Templar International. We hope that it will not be, once we report this page to Facebook, but if you do come across it, just think of what is posted onto it. Would you really be comfortable your name being associated with this poisonous material? Conspiracy galore on the Knights Templar International Facebook page: Trump win forms the basis for a few more years before ‘minority’ demographic growth leads to the break up of the US