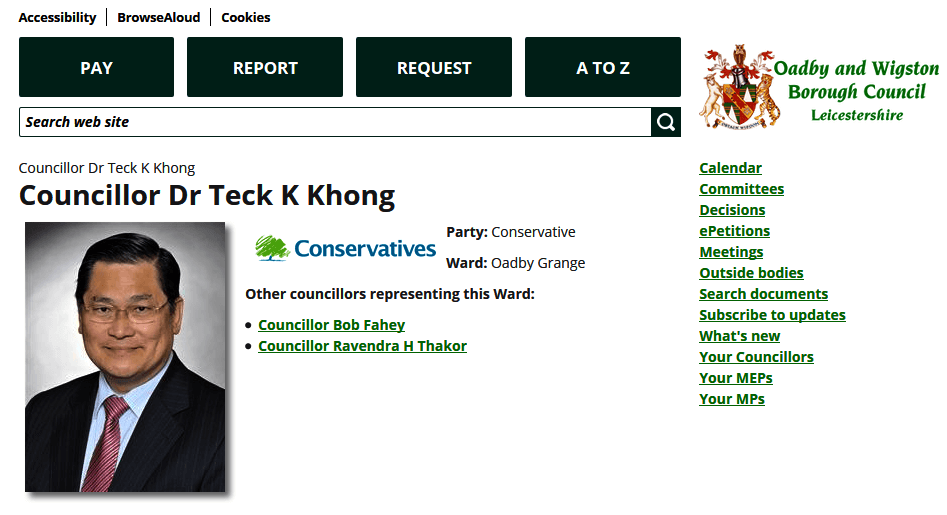 It has been brought to our attention that the Conservative Councillor, Cllr Dr Teck Khong, has an interesting network of friends on social media. Of particular interest has been the fact that he is a serving councillor on Oadby and Wigston Borough Council in Leicestershire. He also lists his profession as a General Practitioner in his register of interests and also is a Board member on the Governing Body of Leicester City’s Clinical Commissioning Group. He also lists an interest in a company called Healthwebwide Limited, which is also listed in his register of interests.

So far so good. Yet, a look at the social media activity of Cllr Khong leaves much to be desired in the comments that he seems to ‘like’. For example, he seems to ‘like’ the following statement made by a Twitter user on the 14th of November 2015,

“Liberty, Equality and Fraternity……perhaps alien values to Muslims and Muslim countries. In that I agree.“

“hahahaha yeah. The Muslims on the average as a whole,” and the comment followed on from his statement of “malevolent aliens.”

“They r Halal certified Muslims don’t object as collecting halal tax from us kaffirs should be labelled.”

The ‘likes’ further continued as he hit the button for the following statement on the 27th of March 2016,

“Naturally Muslims can be humane in spite of their religion, much as not all Nazis were guilty of murder.“

And the list goes on. On the same day he ‘liked’ the following comment which referenced Islam,

“And evil religion if ever there’s one“.

On the 10th of December 2015, he also ‘liked’ an overtly anti-Muslim statement using terminology that is straight out of the lexicon of anti-Muslim bigoted terms. This is what he placed his red heart shaped ‘like’ next to,

What is particularly problematic about this case is the fact that Cllr Khong does not fit the profile of people who are susceptible to comments which are anti-Muslim in nature. Then again, as we have said before, anti-Muslim bigotry is not the domain of one race, social status or faith, but what is troubling is the fact that a serving councillor and a man in a position of such responsibility chooses to overtly ‘like’ anti-Muslim comments of his own volition. Not only is he a General Practitioner who may well be serving diverse communities, he is also a Board Member on the Governing Body of the Clinical Commissioning Group in Leicester City Council and these are senior positions where decisions are made which can affect communities.

We will be writing to Conservative Central Office and to Clinical Commissioning Group in Leicester with this information and material and also to Oadby and Wigston Borough Council. We hope that this matter will be looked into by the relevant bodies. In the meantime, our advice to Cllr Khong would be,

“Give the ‘like’ button a rest, it may just ensure that you don’t make matters worse.”