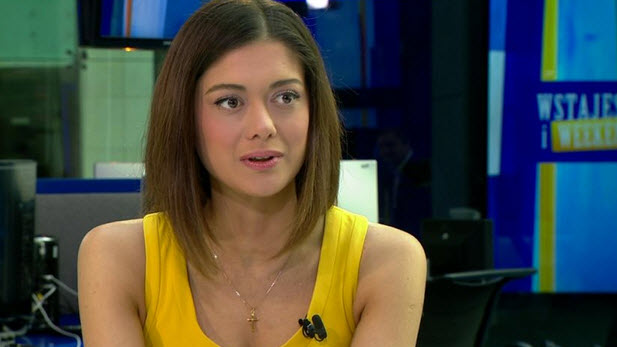 Many of you will never have heard of Miriam Shaded of the Esther Foundation in Poland. Recently the Esther Foundation, which seems to based on promoting a youthful and attractive persona based on Shaded herself, has been working with the Barnabas Fund to bring Syrian Christian refugees to Poland. Further information on one of the controversial founders and international director of the Barnabus Fund, Patrick Sookhdeo can be found here. (It should also be stated that the Barnabus Fund have stated that Sookhdeo was the international director and not employed by the Fund in the UK.)

Sookhdeo previously converted from Islam and has taken controversial positions on Islam and how the British armed forces work with Muslim populations in the field. We understand that the relationship has ended with a plethora of blogs raising the question as to why he was engaged with by the Ministry of Defence.

Let us come back to the issue of Miriam Shaded. A Christian whose father was Syrian, Miriam Shaded has become the mouthpiece for some of the worst inflammatory language that is peddled within Poland and through her social media presence. As a young personable female, she has become the touchstone on which people’s fears and bigotry about Muslims are projected. As a female of Syrian heritage, the assumption may be made by some that she must know what she is talking about when she is on television talking about Islam and Muslims. Yet, some of this rhetoric is far from realistic and plays to an extremist and nationalistic far right tendency that caricatures Islam, and thereby its followers, as a threat.

Take this for example. This is one of her Facebook posts on the 27th of February 2016.

“Seeking a expert lawyer in winning major issues on the territory of Poland and perhaps the EU, which will help me win the trial on outlawing Islam as a totalitarian system and the Koran, which preaches hatred, violence and legitimizes crimes.”

The text is pretty clear and she is looking for legal advice to outlaw Islam. Seems to be all of the rage right now if someone is looking to make a name for themselves and to possibly revel in a climate of anti-Muslim bigotry which is taking hold of some parts of the continent.

After that post, there seems to be a number of takers for her divisory call. This was her latest statement:

“Thank you all for your words of support and assistance as well as applications by the best lawyers in Poland and Europe. Due to the number of messages that I received, we will consider and interact with specialists from Monday. It is so important a matter that  we ask you to pray for wisdom and God’s guidance to select the best firm. I cordially greet and wish you a successful Sunday evening. Smile emoticon“

So much for the ‘smile emoticon’ when she is trying to restrict the freedom of belief, a fundamental tenet of human rights. This is what Shaded and her camera friendly smile, is intending.

Shaded is possibly driven by some form of Christian mission and zeal and may believe that demonizing Islam and defacto, the followers of Islam, is the strategy she wants to employ. Yet, she is savvy enough to realise that cannot be outwardly hostile to Muslims and so may be skirting around this by targeting Islam. Yet, let us not underestimate the pull of a young female who is part Arab and who in the eyes of many in Poland, who have never met Muslims, apparently knows what she is talking about.

We have recently written about the history of Islam and Muslims in Poland before, through our sister site, Faith Matters. These articles can be found here and here. What is particularly troubling about people like Shaded is that their history and rhetoric starts from ‘ground zero’, effectively when they want it to start. In doing so, they simply choose to ignore the rich history and heritage of Poland and the fact that Muslims have shaped its growth and its history. That, we are sure is something Shaded will not mention and that alone should raise alarm bells for those who want to have a holistic and fulsome assessment of their country. Shaded and her rhetoric are never the answer, but they may well be part of a turbulent future if they gain any political traction.