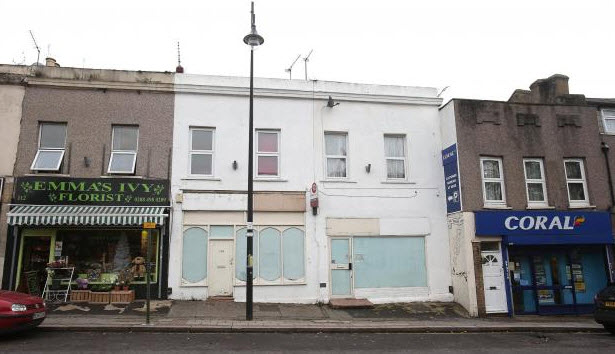 We have received a report from a member of the public that a brick was thrown through the front door of a proposed mosque in Woodford Green in the London Borough of Redbridge.

A new mosque and community centre was recently approved by the local authority and local newspaper reports have suggested that a proposal to turn two shops into a mosque and cultural centre has ‘divided opinion‘.

The Woodford Muslim Cultural Centre (WMCC) is looking to convert the former hairdressers and sweet shop into a mosque and having been denied permission before, the local authority finally agreed to the decision.

The response it seems has been violent and criminal. Last week ‘bacon‘ was written on the door of the proposed mosque and a brick was thrown through the front of the building last night.

We regularly come across such incidents where opposition to mosques involves not just some local residents, but individuals who are in no way connected to the area. Local authority officers who have received such objections before have told us that there have been ’round-robin’ campaigns of pro-forma letters that have been circulated with individuals reacting without any knowledge as to the proposed application and these campaigns have added to a sense of fracture in relations in local communities. Sadly, it seems that those looking to affect local community relations have used mosque planning applications as a tool to try and garner support for their targeted campaigns against mosques.