Murder of Asad Shah Has Taken Something From Us All. 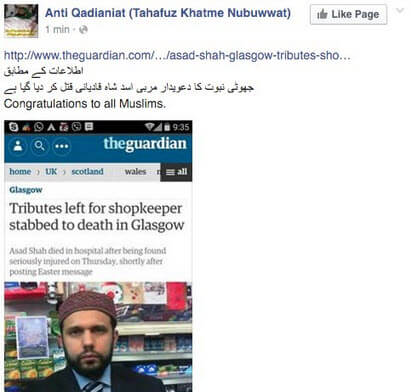 The murder of Asad Shah has left a huge imprint on many communities, both Muslim ad non-Muslim. The 40-year-old was deeply respected and had posted a social media post thanking the Christian nation that had given him so much. He also highlighted the role of Christ in Islam and had truly straddled and held dearly, being British and being Muslim. It seems that in many ways, he was at peace in his adopted country.

His brutal murder and the violent manner in which he was treated, means that his death is something that we should actively mark. We should mark any murder, with a desire to redouble our efforts to value the sanctity of life and when someone is violated in such a manner, we should stand together and make clear that we as a society cannot and will not accept such actions. Many have done that by standing in silence, together – people of faith and no-faith. It is testament to his personality and to his humanity.

Whatever, the motivation, we know that Police Scotland regard this murder as religiously motivated. Asad Shah was an Ahmaddiya and the murderer, another Muslim of Sunni heritage. We cannot extrapolate and we must not influence process where justice needs to take its course. Yet, the current information provided is worrying and may indicate sectarian hatred.

We will however highlight the fact that we come across anti-Shia and anti-Ahmaddiya rhetoric through the work we do in Tell MAMA. We have highlighted this before on many occasions and these can be found here, here and here and our Director has also highlighted this issue.

The fact is that such hate against fellow citizens cannot and should not be tolerated. It is unacceptable and should not longer be regarded as an ‘intra-Muslim’ issue. They are hate incidents and are recorded as such by us and dealt with in an identical manner by the police. We must remain vigilant against such forms of intolerance and whilst people may have differences in opinion, openly stating threats against Ahmaddiya Muslims or Shia Muslims is unacceptable.  We should not tolerate such hatred and sectarianism any more.

These are some of the examples of material that we have picked up: