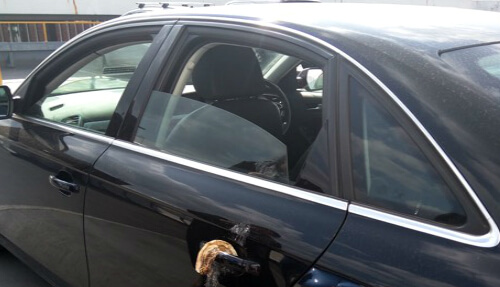 Cambridgeshire Police are investigating an anti-Muslim hate crime after a piece of bacon was left on the handle of a Muslim man’s car over the weekend.

The man was returning from a local swimming pool with his six-year-old niece when he discovered the pork product. After reporting the incident to police, our support service was also made aware.

He expressed his surprise that the perpetrator had not targeted the driver’s door, suggesting that the act was premeditated as nothing would outwardly suggest that the car owner was Muslim.

The sunshine also meant that the bacon slice had cooked, leaving a small streak of fat along the door. This was soon removed, but not before photographic evidence of the vandalism was taken.

Pork products are, sadly, used to target Muslims online and offline. On Facebook, memes related to bacon helps to drive the unhelpful phenomena of ‘likebaiting,’ a broad tactic that appeals to the emotional responses of an audience to generate ‘likes’ or shares.

In anti-Muslim circles, however, it serves to recycle the false notion that the sensibilities of all Muslims are offended by the slightest reference to pork.

Bacon has been used by the far-right to target mosques and their congregations in Bristol, London, and Edinburgh in recent years.

A severed pig’s head was dumped at a Blackpool mosque in 2014.

The staff at an Islamic faith school in Portsmouth discovered a severed pig’s head tied to their gates in 2016.

The death of Kevin Crehan, who plead guilty to tying bacon slices to the handles of a mosque in Bristol, is open to speculation, despite the ‘non-suspicious’ nature of his death.

Some Muslims reporting to our service have found pork products outside of their homes or in food items.

In November 2016, two Polish men were jailed after throwing bacon strips at worshippers at the Al-Rahman Mosque in North London.

Britain First, the far-right party, once declared that burying a pig on the grounds of a mosque could prevent its construction. This idea continues to endure in similar ideological spaces.

Online hate messages sometimes reference pork. In one example, a nationalist account report to our service had tweeted: “They [Muslims] should only be allowed to breathe if they agree to eat bacon, then after they do it, shoot them anyway.” This is an extreme example, but the softer rhetoric has landed some in the courts. A Twitter troll was fined £450 for posting racist, sectarian, homophobic, antisemitic and anti-Muslim messages. One tweet read: “No surrender ya Muslim scum. See you in court. I’ve got the bacon sandwich and yer six-year-old wife.”

In 2015, a Facebook post lamenting the placement of pork products in a supermarket halal aisle went viral, but speculation remains about its origin. A fake far-right Twitter user attempted to reuse this image in 2017.

A hoax anthrax letter attached to pork meat was placed on a car near an Edinburgh mosque last year.

In February, a Scottish man was given a community order after telling his stepfather to “go eat some bacon” in a racist Facebook rant after learning of his intent to convert to Islam.

Some Muslims have responded with humour or reminded others that pork is not ‘kryptonite’ to Muslims.