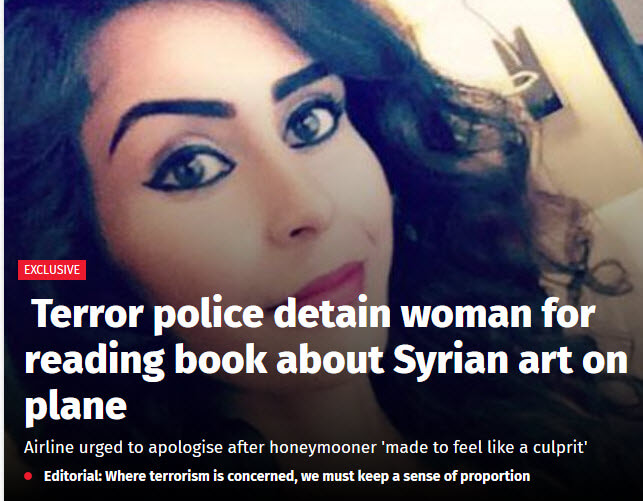 As Orwellian as its get, a Thomson Airways cabin crew member reported in a Muslim female for reading a book entitled, “Syria Speaks: Art and Culture from the Frontline.”

According to the Independent newspaper, Faiza Shaheen was interviewed by South Yorkshire police under Schedule 7 of the Terrorism Act which left her shaken and angry that she had been discriminated because of her faith.

The Independent lists ‘Syria Speaks’ as,

“The award-winning book by Malu Halasa is a collection of essays, short stories, poems, songs, cartoons and photographs from Syrian authors and artists.

Basis of Interview Under Schedule 7 of the Terrorism Act

It seems, according to the Independent, that the evidence for a Schedule 7 Stop was a book that Ms Shaheen was reading and possibly, the fact that she was travelling to Turkey and was Asian and Muslim. Some of these factors may have triggered a Thomson Airways cabin crew member to report in Ms Shaheen.

This case brings up a number of issues. The first is that young Muslims may re-confirm feelings that they are going to be increasingly targeted because of the ignorance of some. Terrorists and extremists will hardly be reading books on planes that raise their profile in the eyes of cabin crew staff.

Secondly, some will think that if Ms Shaheen, who is not visibly Muslim, can be stopped and left feeling that she has been targeted, then what of others reading the wrong type of book and who are visibly Muslim. Thirdly, such actions further corrode trust in the counter-terrorism agenda for young Muslims, who as suggested before, will re-affirm feelings of victimisation.

Which brings us onto the following. We are very glad that newspapers like the Independent highlight such cases since people need to get a sense of perspective. Asian Muslim men or women reading books about the Middle East should not be seen as people who are somehow suspect and potentially vulnerable to extremism. Also, we hope that the Thomson Airways cabin crew staff member will realise that common sense is an important part of life. Reading a book does not indicate extremism even with the words ‘Syria’ and ‘frontline’ within the title. What makes up good counter-terrorism work is common sense, looking at the wider picture and good solid intelligence. Referring people to counter-terrorism teams on the basis of books that they read on planes, is not only Orwellian, it is totally counter-productive.