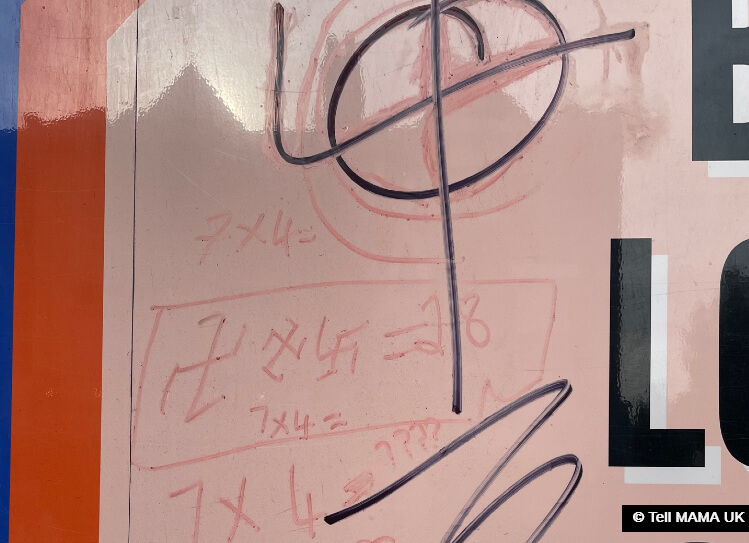 Nazi graffiti, including swastikas and a Celtic cross, was daubed on a site of an old cinema in Walthamstow in east London.

A member of the public spotted the racist graffiti on the morning of July 28 at the site of the former cinema, the Mirth, Marvel & Maud on Hoe Street, which is undergoing building work and restructuring to re-open into a theatre.

The graffiti begins with a mathematical equation, asking what 7×4 is, as three Nazi swastikas appear below and present the number 28 – a numerical reference to the infamous violent neo-Nazi group Blood (2) and Honour (8).

Blood and Honour is a proscribed terrorist group in Canada, along with Combat 18. And emerged from the fascist music scene in England in 1987 and is banned in several European countries and Russia.

Blood and Honour chapters have committed racist violence in the UK, Europe, and the United States.

Calls to proscribe Blood and Honour in the UK are not new either.

The Celtic cross appeared above it, though it is unclear when the graffiti appeared.

Several months ago, we reported how upstanders had removed stickers promoting the Polish far-right on the same Walthamstow street.

Tell MAMA can confirm that the Metropolitan Police are now aware and have launched an investigation after our Casework Team made a police report on their behalf, once we had their informed consent.

We will provide further updates where possible.

UPDATE: The council has since removed the graffiti – we thank them for a speedy resolution, as the police continue to look into it. Tell MAMA has also informed Waltham Forest Council members and the local MP Stella Creasey.

The site has now been cleaned. Many thanks again for bringing it to our attention. pic.twitter.com/TvSYAMLRgC