Racist graffiti promoting the violent neo-Nazi group Combat 18 has been scrubbed off a wall in the Manningham area of Bradford.

Tell MAMA reported the graffiti to Bradford City Council and West Yorkshire Police on July 30, after a local outreach officer spotted it.

West Yorkshire Police informed Tell MAMA of its removal a day later, adding that it will increase patrols in the local to provide reassurance to communities.

Police are reviewing CCTV footage as part of their ongoing hate crime investigation. 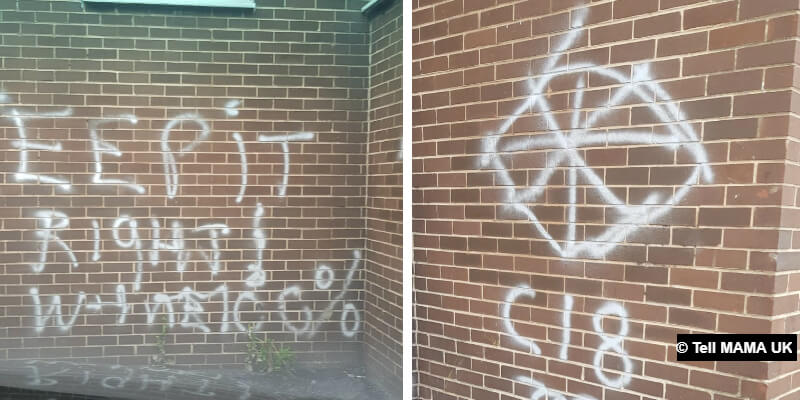 The graffiti included the statement “keep it white” – a popular example of the phraseology within neo-Nazi and extreme nationalist circles which have been used to promote clothing and white power music in Canada and Poland.

Blood & Honour and Combat 18 are proscribed terrorist organisations in Canada.

National Action were the first extreme far-right group to be proscribed as a terrorist organisation in the UK.

William Pierce, who left the American Nazi Party to take over the leadership of the National Alliance in the 1970s, pledged to: “do whatever is necessary to achieve this white living space and to keep it white.” His death in 2002 split the movement, which had been identified two years earlier, as one of the most dangerous hate groups in the United States, according to a report from the Anti-Defamation League.

Combat 18 was born from the stewarding of the British National Party but had always rejected traditional party politics, splitting from the party in the hopes of triggering a ‘race war’. The group took direct inspiration from the neo-Nazi terrorist group The Order, which had bombed a synagogue and murdered radio host Alan Berg in 1984, advocated terroristic violence through the mantra of “leaderless resistance”. The FBI’s infiltration of the movement linked them back to William Pierce, who authored The Turner Diaries, a white supremacist novel which has inspired domestic terrorism in the United States, the UK, and other countries.

Other neo-Nazi terrorists, like David Copeland, the nail-bomber who left three people dead and 139 injured, following a hate-filled campaign against minorities and the LGBT community in Soho, London, in 1999, were linked to Combat 18 via the National Socialist Movement.

The graffiti is alarming for reasons specific to Bradford and concern the spectre of fascist, racist violence in the city and other northern areas in 2001.

Writing in 2002, Larry Ray and David Smith argued that the social unrest and riots were linked “to an increase in racial violence, the long-standing mistrust and disillusionment with the police, the overt and taunting presence of the BNP and other far-right groups and the entrenched poverty and unemployment which existed within the cities”.

Years earlier, in 1995, there were protests and riots in Manningham in response to police conduct, accusation officers had always denied.

As the author Daniel Trilling noted: “In Bradford, then Oldham, then Burnley, then Bradford again, local tensions spilled over into violence between whites and Asians. All three shared the same broad patterns of economic deprivation and racism – and in all three towns the situation was made worse by the BNP and its fellow-travellers on the far right”.

Other academics put the disturbances into a wider context, spanning from the underlying and long-standing fears of neo-fascist mobilisation.

The Observer documented, how, in the summer of 2001, that the National Front and Combat 18 were targeting Oldham and Bradford, intending to provoke violence.

Supporters of the National Front had travelled from London, Essex, Birmingham and Wales and converged on the town of Oldham, intent on provoking violence, in a clear example of a coordinated campaign of race hate. Eleven people were later convicted. And there were fresh calls to stop the National Front from agitating in Bradford a month later. The then Home Secretary, David Blunkett, acquiesced to repeated calls from West Yorkshire Police and local politicians to ban the march, days before it was due to take place. Members of the National Front did, however, turn up in the city, with as many as two hundred supporters flying in from Belgium to attend, with others driving to Bradford. A counter-protest in the Centenary Square drew around 500 people. In the afternoon, supporters of the National Front spilt out of an adjacent pub and racially abused some locals, which resulted in retaliatory violence. Speaking to The Observer newspaper on July 8, 2001, Tahir Hussein said: “The whole thing kicked off with some white lads calling us Pakis. There’s lots of youths running around the streets and the police seem to have lost control”.

During the 12 hours of riots and disturbances, 164 police officers were injured after being targeted with bricks, bottles, petrol bombs and fireworks. More than 80 people required hospitalisation, and there over 110 criminal incidents recorded – ranging from assaults to criminal damage, causing £27m in damages.

The then Chief Superintendent Phil Read had dismissed accusations that the police response to the violence and disturbances were disproportionate. During a press conference, he said: “Troublemakers, both local and from outside Bradford, appear determined to commit criminal acts despite the best efforts of the police, the council and responsible members of the community”.

Locals in Manningham had also blamed outsiders for the violence and property damage.

Academics also researched how media narratives in a post-9/11 climate shifted from discussions of Asians to Muslims.

Two years later, the court of appeal heard that the sentencing judge had disregarded the fears of the Asian community when giving “excessive” sentences to Asian men involved in the riots, compared to sentences given to white men found guilty of public order offences.

Of the 15 appeals before the court, appeal judges reduced the sentences in only four, citing individual circumstances. In total, the judges ruled that prison terms for more than 100 people, ranging mostly from four to five years, were an appropriate and proportionate response that reflected the seriousness of the events.

A documentary about the riots and disturbances in Bradford was released in 2006.