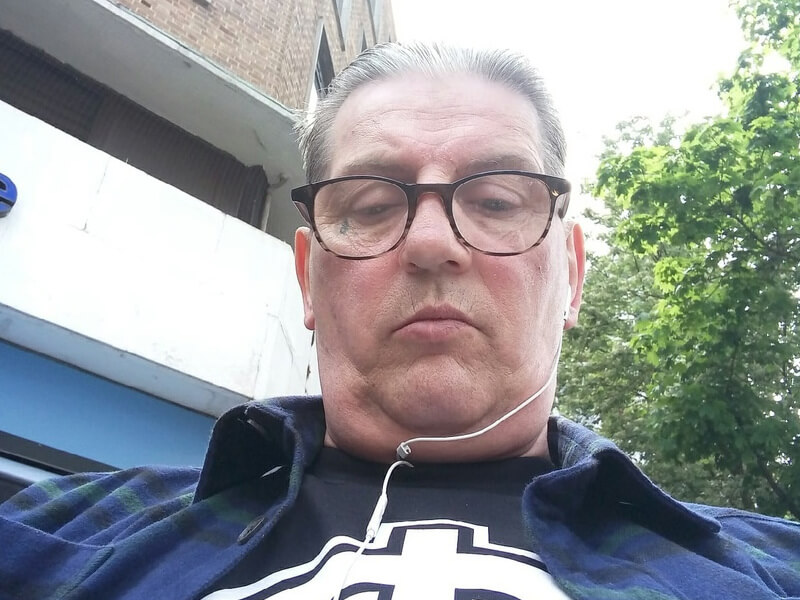 A 61-year-old neo-Nazi has become the second individual jailed for the extreme racist material they posted on the Russian social media platform VK. 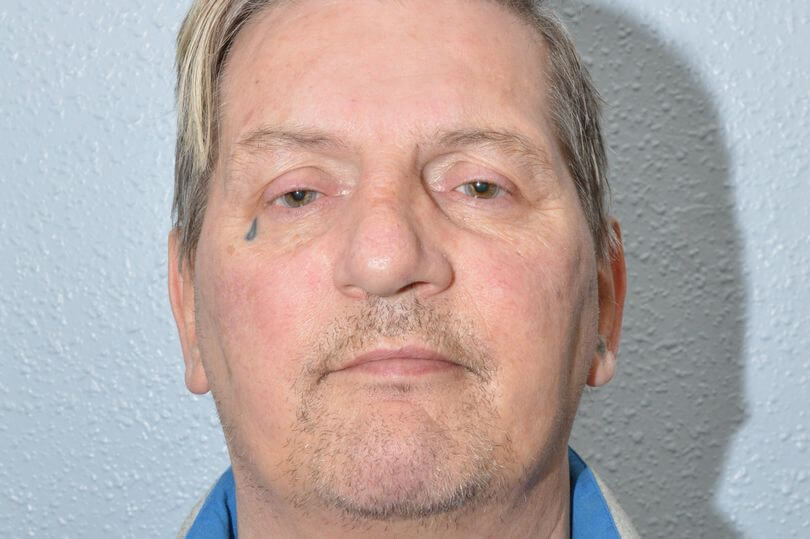 According to the Evening Standard, Hutchinson sought to recruit other white supremacists to enact racist violence on a street level.

Our investigation of Hutchinson’s social media revealed a broad tapestry of highly violent racist imagery and language, including repeated use of the N-word and the K-word, targeting Black and Jewish communities. 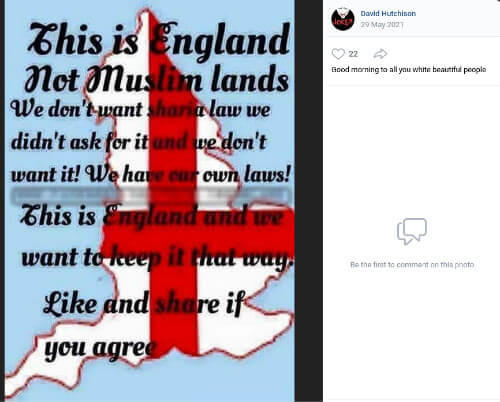 In one noteworthy post that matches the timeline of criminal offences committed, we identified a horrific racist cartoon about Jewish communities drawn from the notorious white supremacist hate site White Aryan Resistance. The author of these racist cartoons created them under the moniker “A Wyatt Man” in 2004 – their true identity remains a subject of much curiosity and investigation. The caption Hutchinson added called for direct violence towards the “K****”. Other content called for the murder of Jewish communities. 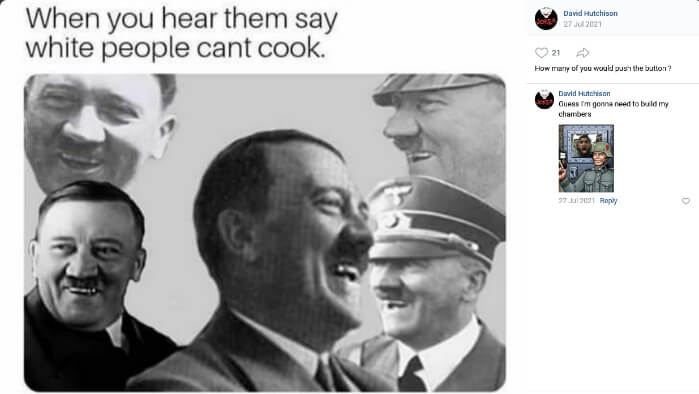 Other examples of content identified included racialised, harmful memes about Muslims that included “This is England, not Muslim lands” and a cartoon that invoked the Nazi Holocaust with Muslims depicted in gas chambers. Other anti-Muslim memes compared Islamic beliefs to faecal matter and referred to Muslims collectively as paedophiles. In May 2021, they posted a dehumanising comment about how to “handle a Muzzie rat”. Tell MAMA has long documented how anti-Muslim language amongst the far-right will invoke dehumanising language like “musrat” or “mus-slime”.

A dehumanising and racist post linking Black communities to disease also appeared, as did numerous examples of Hutchinson using the N-word and sharing pro-slavery memes.

Repeated homages to Enoch Powell appeared on their VK account, with calls for people to “wake up”.

Other content included a “straight white pride” meme alongside misogynistic materials (pornographic or otherwise) and conspiracies about Covid vaccines and lockdowns.

Nick Price, head of the Crown Prosecution Service’s Counter Terrorism Division, said in a statement: “Over a 10-month period David Hutchinson persistently posted these derogatory racist memes on a social media site which he believed consisted of like-minded people.

“His comments went beyond free speech and demonstrated hostility to several racial groups. By his pleas he has accepted they were intended to stir up hatred against those groups.

“Hate crimes have a corrosive effect on society and we will always prosecute where there is sufficient evidence to do so.”

Responding to the verdict, our Director Iman Atta said: “We welcome the conviction of 61-year-old neo-Nazi David Hutchinson. They dreamed of turning their vicious, asinine racist views towards Muslim, Jewish, and Black communities online into violence on our streets.

“Our investigation found extreme racism and homophobia on their VK account.

We cannot stress the importance of flagging such harmful materials to ourselves at Tell MAMA and the police.”