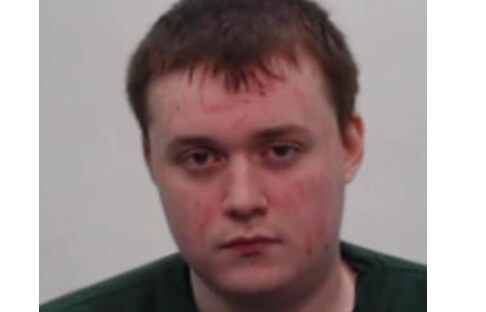 Sam Imrie, the 24-year-old neo-Nazi, convicted of terrorism charges, including threats to burn down Fife Islamic Centre, was told to anticipate a “sentence of some length” when they return to Glasgow Crown Court next month.

The two-week trial concluded with the jury finding Imrie guilty of eight of the nine charges brought against him, including two breaches of the Terrorism Act, wilful fire-raising, drink-driving, and possession of child abuse images and violent, necrophilic pornography.

Imrie was found not guilty of preparing an act of terrorism, despite amassing a collection of weapons (two knives, nunchucks, an axe, a hammer, and a rifle scope) and filming, in a chilling evocation to the white supremacist terrorist who murdered 51 Muslims in Christchurch, had filmed his intent to live stream an arson attack on the Islamic centre.

He instead wilfully set fire to the doorway of an empty building and set fire to the foliage around a headstone located within St Drostans Cemetery in Markinch, on July 4, 2019, which they unsuccessfully attempted to pass off as the Islamic centre on the fascist Telegram page. When questioned, fellow Telegram group members expressed scepticism, with statements like “Looks like an abandoned building,” Imrie replied, “That’s the Islamic Centre next to the woods, r****d. I’m going to jail.” Imrie had also uploaded the video along posting various white supremacist materials to that Telegram page. For example, he wrote: “No guns. All I can do is burn them down.” He also wrote: “I will stream. Death to the Invaders!”.

Of the terrorism-related charges, the jury found Imrie guilty of glorifying the white supremacist terrorist responsible for the murder of 51 Muslims in Christchurch in March 2019 and Anders Breivik, the white supremacist terrorist who murdered 77 people in Norway in 2011, on Facebook and Telegram. The second charge concerned how he maintained a “record of information” helpful to somebody committing acts of terrorism – including possession of the individual screeds authored by both terrorists.

The 24-year-old did, however, approach the Islamic centre, as CCTV captured Imrie filming its exterior on his phone and uploaded a photo to the group with a racist caption that read: “Animals have their windows barred like a zoo.”

Imrie would boast online that “All my heroes are mass murderers.” In court, he admitted to regularly consuming far-right and neo-Nazi propaganda, collecting a dizzying amount of racist hate materials on their computer (ten-thousand images, according to news reports), including Holocaust denial. On Snapchat, he used the username “racewarplz”, and his computer password contained the N-word.  On Facebook, Imrie’s cover photo was of Adolf Hitler, with their biographical details having read “Seeing Muslims suffer,” with other neo-Nazi propaganda including 14/88 appearing on their profile. He considered Trump a “God”.

Before the age of sixteen, Sam Imrie appeared at Kirkcaldy police station after being caught writing “F*** Muslims” on a bus shelter, his mother Joyce revealed when giving evidence to the court.

When Police Scotland raided Imrie’s home after a tip-off from the Met Police in London (who had infiltrated the now-removed Telegram page @fashwaveartists), they recovered an iPhone which included a copy of the Christchurch terror attack live stream, which Imrie admitted to watching several times, along with propaganda images declaring the terrorist a “saint” who “did nothing wrong”.

He described an obsession with the white supremacist imageboard 8chan and how he became “red-pilled”. In contrast to “black pill” nihilism, academics argue, which deems it “impossible” to escape the social hierarchies, proponents of which claim face exclusion from the “blue pill/red pill” proponents who seek advantage from “knowing” how society “really works” to escape their difficulties.

We heard further examples of Imrie’s racist beliefs towards Jewish communities during the trial, where he expressed antisemitic canards of disproportionate societal influence and referred to the video-sharing platform YouTube as “JewTube”.

On Telegram, they wrote: “The SNP Party wants millions of Muslims to come in so obviously I want Sturgeon to die.”

Imrie denied all charges against him and argued that his neo-Nazi beliefs were unserious forms of humour, born from his health issues.

With the trial concluded, various news media headlines draw further attention to the inconsistencies in how far-right terrorism is framed, with some headlines avoiding the term only to use it in the body of the article. Examples included headlines like “Fife terror accused revered right wing mass murderers, trial told,” and “Scots white nationalist who idolised mass killers and spouted race hate convicted of terror offences,” to “Chilling video of Scot convicted of terror offences using bagpipe music to copycat Christchurch mosques mass killer” and “Man who ‘idolised mass murderers’ convicted of terrorism offences“.

In another egregious example, but from the body of a news article, a BBC article referred to the far-right terrorist who murdered 51 Muslims in Christchurch as a “far right activist” who “slaughtered Muslims praying at their mosques in Christchurch, New Zealand, in March 2019.”

It's unbelievable that this BBC article which correctly identifies Breivik as a terrorist would then refer to the white supremacist terrorist who murdered 51 Muslims in Christchurch as a mere "far right activist". Language matters.https://t.co/GAlbA18MIb pic.twitter.com/SCecDncYXc

Lord Mulholland remanded Imrie in custody and said: “Be under no illusion – you have been convicted of very serious offences including gathering information about terrorism and encouraging terrorism, child pornography and extreme pornography.”

We welcome the guilty verdict and hope a stringent and lengthy sentence reflects the harm caused to Muslim communities, given that Sam Imrie is an ideologically-driven racist and neo-Nazi who was guilty of terrorism offences. The personal safety of Muslims and the safety of all Islamic institutions across Scotland and, indeed, the United Kingdom is vital. The threat of far-right terrorism is a threat to Muslims and other minoritised communities, and we thank the diligent work of the police and the courts in a successful prosecution of a complex case.